Never talk money, religion or politics in polite company – that’s the old adage for keeping the peace. Well, never talking about money is how women ended up getting paid seven cents on the dollar, so maybe it’s time to consider who made up that adage in the first place.

For the last year – and for the first time in my life – I was actively involved in a political campaign. I organized neighborhood canvasses, made calls, traveled to Nevada twice, wrote blogs, registered voters – and I honestly have no idea if it made any difference. But I DO know it made a difference that people saw me do it.

I was not quiet about it; I posted my activities on social media, talked to friends and co-workers, wore the swag announcing my allegiance, engaged in debates, and made everyone aware of how they too could get involved. This was not normal behavior for me. I am generally the person who scratches her head at the idea of sharing every thought or action via status update, and had to be literally threatened by my family with no more photos of my nephews before I even got online in the first place. But this year there was a candidate I deeply admire, and after years of adulting I was fed up with the casual (and not so casual) sexism I experience every day. The time was right.

Well, folks, shit just got real. And if we’ve learned anything from the past year it’s that there IS such a thing as too much peace and quiet.

Two things happened when I got vocal about my views: The more I spoke up about things, the more my friends – and not-so-friends – started sharing their thoughts, too. Conversations were started that revealed unknown allegiances, and others that challenged me to defend my point of view or my candidate, all of which made me a deeper thinker, a more informed citizen, and a far better advocate for my causes. Difficult, serious, and (ideally) respectful conversation is good. It is important.

But the second thing that happened is that I got added to several secret groups of like-minded people, mostly women, on Facebook. Now, these groups were an important refuge, especially for those who were fighting the fight on the outside like me, but unlike me did not have the good fortune of a supportive family. For them, the work of speaking up was exponentially harder, and they suffered no small amount of abuse, which made the well of support a vital source of sustenance.

Too many others, though, spoke up only in these groups, unwilling to breach the peace and talk politics in their daily lives. As women, we are conditioned to be polite, taught as girls to not make waves, and labeled “difficult” or “emotional” when we do dare speak our minds. Well, folks, shit just got real. And if we’ve learned anything from the past year it’s that there IS such a thing as too much peace and quiet.

It’s not easy, and I chickened out plenty of times. I regret not having a conversation with my 20-something cousin about her easy willingness to re-tweet lies and spread casual sexism and hate. I wish I had asked my low-information, active-voter friend back in New Hampshire if she had any questions about the various candidates. But I didn’t, and too many of us didn’t, and now here we are with a grossly incompetent, hate-filled white man elected over an immensely qualified, compassionate woman who’s been lied about consistently for decades.

So it’s time to stop being polite about it.

It is time for us ALL to start speaking up.

Challenge each other, demand facts and reasoning, and don’t let fear be an acceptable excuse for anything. Will it work? Most of the time, not at all. But it WILL make a difference over time.

Considering what crap is about to rain down for the next four years, it is especially important that we white people speak out against racist and xenophobic fears, that we call out a lack of empathy when we see it, and insist that people try to think beyond their own immediate bubble. This CAN be done respectfully, but the time for polite company is over. Dare to be annoying.

And ladies in particular: Hillary Rodham has stood up for us, spoken out for us, and taken no end of abuse for us for more than 40 years, all in the hope that someday we might be seen as just as human as men. The least we can do for her is start speaking up for ourselves.

PHOTO GALLERY
Why I Need Feminism

Want To Honor Hillary Clinton? Stop Hiding And Speak Up.
Why I Need Feminism 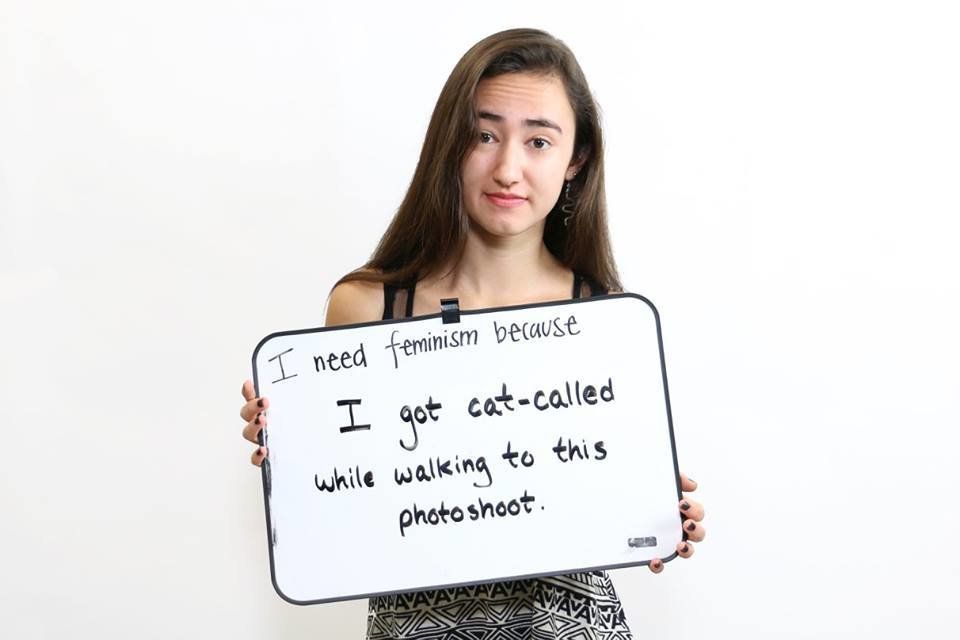