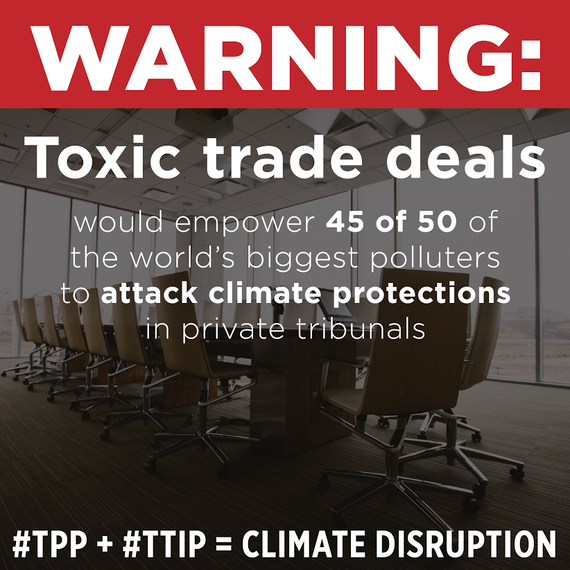 For the full scoop, click here for a new report, and here for an interactive map.

Did you know that two looming trade deals, if passed by Congress, would newly empower 45 of the world's 50 largest corporate climate polluters to "sue" governments in private tribunals over policies that keep fossil fuels in the ground?

Or that these two deals would give this new power to corporations currently fracking on our public lands, drilling for oil off our shores, and operating dirty pipelines across the country, undermining fights against fossil fuels from coast to coast?

These are among the alarming findings of a new report and interactive map, released today, that reveal the climate roadblocks posed by the Trans-Pacific Partnership (TPP) -- the controversial pending trade pact between the U.S. and 11 Pacific Rim countries -- and the Transatlantic Trade and Investment Partnership (TTIP) - a broad pact under negotiation between the U.S. and the European Union.

In January, TransCanada -- the company behind the Keystone XL tar sands pipeline that President Obama rejected last November -- made clear that this trade deal threat is real. The company announced it would use the North American Free Trade Agreement (NAFTA) to ask a private tribunal of three lawyers to order the U.S. government to pay more than $15 billion as "compensation" for the pipeline rejection that avoided increased climate disruption.

Today's report shows for the first time that the TPP and TTIP would more than double the number of fossil fuel corporations that could follow TransCanada's example and use unaccountable tribunals as a backdoor way to challenge U.S. policies that keep fossil fuels in the ground.

Like NAFTA, the TPP and TTIP would empower foreign corporations to take on the U.S. government in tribunals not accountable to any domestic legal system, in which lawyers -- mostly corporate attorneys -- act as "judges." There, the corporations could use the trade pacts' broad foreign investor rights to demand compensation for U.S. fossil fuel restrictions that they saw as "arbitrary" or contrary to their "expectations" of a stable business environment.

No previous trade deal has given such broad rights to corporations with such broad interests in maintaining U.S. fossil fuel dependency. By handing ISDS rights to these and more than 100 other foreign fossil fuel firms, the TPP and TTIP would pose a major threat -- unprecedented in the history of such pacts -- to U.S. efforts to keep fossil fuels in the ground. Here are a few examples.

A "Right" to Frack?
Communities and environmental organizations are pushing to ban the dangerous practice of gas and oil fracking in states from California to Pennsylvania to Colorado. But the TPP and TTIP would allow corporations fracking in these three states, plus nine others, to use ISDS to try to prevent, or gain compensation for, any new fracking restrictions.

This is not a hypothetical concern. Lone Pine, a gas company in Delaware, is currently using NAFTA to launch an ISDS case against Canada for a fracking moratorium in Quebec, claiming that the moratorium revoked its "valuable right to mine for oil and gas under the St. Lawrence River."

A Lifeline for Offshore Drilling?
To avoid a repeat of BP's disastrous 2010 oil spill and Shell's ill-fated attempts to drill in the Arctic, coastal communities and activists are calling for a halt to all new offshore drilling and a cancellation of existing Arctic drilling leases.

But the TPP and TTIP would newly empower oil and gas corporations with more than 10 million acres' worth of U.S. offshore drilling leases - including BP and Shell - to use ISDS threats to resist momentum against offshore drilling. These firms control one out of every three acres off the U.S. coastline that is covered by an active drilling lease. In the Arctic, they control 85 percent of the leased area.

A License to Pollute Public Lands?
To limit climate-disrupting emissions, more than 400 environmental organizations, leading members of Congress, and both Democratic presidential candidates have called for restrictions on oil and gas extraction on U.S. public lands. But the TPP and TTIP would move in the opposite direction.

The deals would give ISDS rights to corporations with leases for oil and gas drilling on over 720,000 acres of U.S. public lands. Fossil fuel corporations from Australia to Spain would gain the ability to threaten to bring costly ISDS cases if the U.S. government barred the renewal of their leases.

A Tool to Defend Dirty Pipelines?
TransCanada has made clear that the ISDS threat looms large for efforts to block fossil fuel pipelines that risk spills and climate emissions. The TPP and TTIP would newly grant ISDS rights to corporations that own tens of thousands of miles' worth of dirty pipelines in at least 29 states.

If given access to ISDS, these firms would gain a new way to counter opposition to their pipeline expansion plans, which include a controversial 800-mile gas pipeline across Alaska and a project that would pump more fracked gas through the Northeast.

The fight for climate progress already faces enough obstacles without the additional roadblocks imposed by the TPP and TTIP. Replacing these anachronistic deals with a new climate-friendly model of trade is an essential component of the growing effort to keep fossil fuels in the ground.