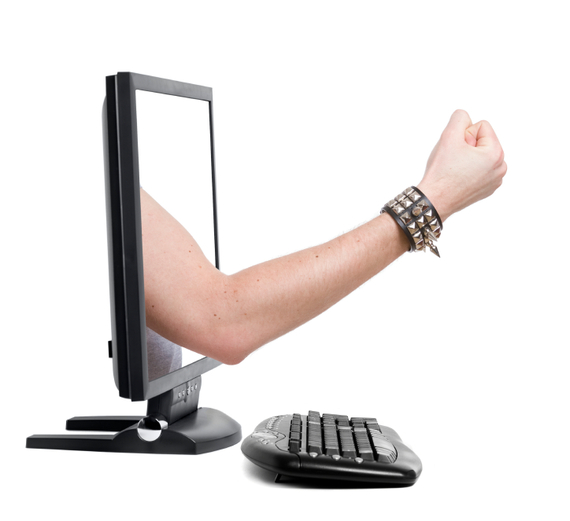 Cyberbullying is big news at the moment -- it's National Bullying Prevention Month, after all. This annual event draws well-deserved attention and helps generate an avalanche of press surrounding cyberbullying statistics, research, effects, and the like. I've learned a lot. But not nearly as much as I've learned from 6th graders.

In the course of teaching middle school digital literacy, I'm afforded the opportunity to talk, and listen, to young people about what happens in their online lives, including "cyberbullying" In fact it takes a whole six weeks to cover this topic in class because, as it turns out, it's complex and can't be addressed effectively in a one-hour assembly, a snappy video, or a colorful handout. As with most social-emotional situations that involve kids... adults help more by listening than by telling, especially when these behaviors take place in an environment that we, frankly, don't know as much about.

So here's what I've learned from kids:

Cyberbullying, defined as" bullying that takes place using electronic technology," is often misunderstood by adults. Kids see a fine line between cyberbullying, digital drama ("mean" online behavior that falls just short of being "threatening or harassing"), and even teasing; behaviors that often get mixed up or misinterpreted by adults who may not know the whole story. For example, think of the sleepover photo that lands on Instagram to announce, "You got left out"... it's not uncommon for this all-to-common scenario to be quickly labeled as "cyberbullying." But is it? According to a recent article in Health Magazine,

We know that parents are concerned about the harms of cyberbullying, but we wanted to learn if there was a consensus among parents about what actually constitutes cyberbullying," said lead researcher Sarah Clark, associate director of the National Poll on Children's Health and associate research scientist at the [University of Michigan's C.S. Mott Children's Hospital's] department of pediatrics. "What we found is that parents differ a lot when it comes to defining cyberbullying."

Of course, anything from full-blown cyberbullying to good-natured teasing might feel equally hurtful to the target (by the way, we use the term "target" vs. "victim") and each should be taken seriously. But the point is these behaviors deserve a conversation, rather than a snap judgment. It takes time and patience to unravel the complexities of preteen and teenage interactions.

What kids perceive seems to be in sync with findings from the Cyberbullying Research Center,

It is important to remember that one instance of mistreatment cannot accurately be equated to bullying, as it must involve harmful behavior of a repetitive nature. Even though many people call one instance of harassment on the playground "bullying," that really isn't an accurate characterization. Most research makes a clear distinction between bullying and harassment, differentiating the two based on the former's recurrent quality. That is not to say that harassment or some other form of hurtful behavior done once is not harmful to the victim--it just isn't bullying. And while this distinction can be perceived as one of simple semantics or a matter for purely academic debate, we feel it is noteworthy. In fact, we believe bullying is actually harassment taken to the next level.

Here are a couple other things kids have taught me about cyberbullying:

They Need and Want Strategies. It is a rare school that sets time aside to teach kids actual strategies to deal with behaviors like those above. I learned this at the recent Digital Citizenship Summit where the few teachers who do get to teach this topic in school shared their strategies. Giving kids steps or tools (like STOP-BLOCK-TALK, for example), or better yet, letting kids negotiate and determine their own strategies, both equips and empowers them to deal with uncomfortable and dangerous online behaviors when they encounter them.

Let Kids Define "Upstander." One strategy that does get a lot of press is the adult advice to, "Be an Upstander." This well-meaning suggestion works best when kids determine how to enact it in their environments. For example, in a couple of classes where I've let kids negotiate and determine their own strategies for dealing with cyberbullying and the like, I've found them to both remarkably firm and thorough. While they largely agree there should be serious consequences for missteps online (and gleefully describe them), they also understand better than anyone that kids will, and do, make mistakes online and off. So in one class they decided that being an "Upstander" meant not only standing up for the "target," but also sometimes for the "perpetrator." They suggested not branding someone a bully forever, because they recognized "the bully might be the one in real pain."

Active Internet Users Get Bullied More. Kids love to tell stories about people they know who have thousands of followers on Instagram (not uncommon). These users usually have public accounts, post often, and feel completely comfortable sharing the soul-baring selfie, for better or for worse. So it makes sense that the price of "Instagram Fame" can be negative or hurtful comments. Additionally, some social networks, like Ask.fm, lets kids ask questions that anonymous users can answer... so if a kid asks, "Am I Hot?," it stands to reason that not every response is going to be a resounding affirmation. What kids know about all this is also confirmed by research. According to a recent Pew Internet report,

That's why it's so effective to open up a dialogue with kids, so they can weigh the advantages and disadvantages of such public scrutiny before they go online in order to decide, as one wise middle school student put it, "If they can't take the heat, to get out of the kitchen."

Young Users Say the Darndest Things. Recently I was lamenting some foul language and inappropriate content I saw on another social network--Yik Yak. This network lets users within a small geographical area communicate with one another anonymously. When I mentioned these disturbing "yaks" to a teen recently she knowingly informed me, "Oh, those are posted by really young kids, you can just tell." (Yik Yak requires users to be at least 17 years of age). Which begs the question, would cyberbullying decrease if kids actually waited to use these social networks once they'd gained some maturity and common sense? I don't think we need an expensive research study to noodle out the answer on this question.

Kids, in fact, are incredibly useful providers of information regarding cyberbullying and other online behaviors that befuddle their parents. Just ask one and see.