If Senator Anthony Portantino gets his way, California will be the first state in the nation to ensure that teenagers can go to school without sacrificing a good night's sleep. This week he introduced SB328, a bill that would require California school districts to start middle and high school classes no earlier than 8:30 a.m.

"Every year we discuss as parents, educators, and legislators, best practices and interests of the children and education," says Portantino. "Well, data is clear: starting the school day later improves the quality of education, health, and welfare of our children. So let's do it."

The average school day for middle and high school students in California starts at 8:07 a.m., with commute times considerably earlier. These very-early hours were established largely to save money on bus costs before schools understood teen sleep needs and patterns. According to the Centers for Disease Control, more than 4 in 5 American secondary schools start the day before 8:30 a.m., with nearly 10% of high schools requiring attendance before 7:30 a.m.

The result is a public health and equity issue right up there with child labor , smoking, and seatbelts. According to the nonprofit advocacy organization Start School Later (which, full disclosure, I co-founded and now direct) restoring more traditional school start times -- as recommended by the American Academy of Pediatrics (AAP), the American Medical Association (AMA), the U.S. Centers for Disease Control (CDC) and other medical and education experts -- is a practical and necessary solution with broad and immediate benefits for children of all ages.

If passed, Portantino's bill will ensure that the more than 3 million public middle and high students in California can go to school at times that allow them to get a healthy night's sleep, have time for breakfast, commute to school after sunrise, and arrive at school ready to learn. It would also be a model for many other states and municipalities around the country that have been unable to restore developmentally appropriate school hours on their own.

Local school districts must, of course, set their specific schedules. However, in many districts local resistance prevents school leaders from acting on the strong body of scientific evidence showing that sleep, and school hours that allow for healthy sleep, are critical to health, safety, and academic achievement. (Those who want help might also benefit from an upcoming national conference on teen sleep and school start times, which includes leaders from districts that have navigated this change successfully.) 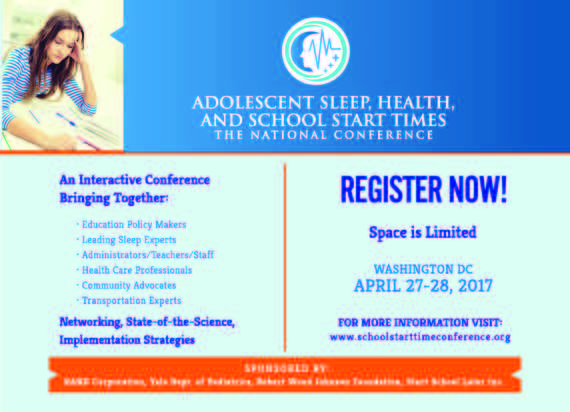 Parameters for developmentally appropriate school hours would be consistent with the many other state regulations for local districts, including requirements about the number of days and hours students must be in class. To date, however, no state has provided clear guidelines for safe, healthy school hours, although Maryland and New Jersey recently passed legislation to study or incentivize later school start times.

Last year, Maryland passed the "Orange Ribbon for Healthy Schools" bill to create a no-cost incentive program to recognize districts moving to later bell times. At the federal level, California Congresswoman Zoe Lofgren has also repeatedly introduced versions of a "ZZZ's to A's" Bill and Resolution to the U.S. Congress -- all unsuccessful to date -- proposing limits on the hours at which American high schools can begin required instruction.

Just this month a new study of 30,000 teenagers across 29 schools in 7 states showed that two years after moving bell times to 8:30 or later, the average graduation rate moved from 79% to 88%. According to study author Pamela McKeever, EdD, the study's findings linking later bell times to improved attendance and graduation rates raise questions for school officials about "whether later start times are a mechanism for closing the achievement gap."

In California, as in many states, improved attendance would also benefit districts financially because school funding is tied to attendance. By improving current attendance by just 1%, The Los Angeles Unified School District would gain an estimated $40 million per year, funds that could be re-invested in schools to benefit students.