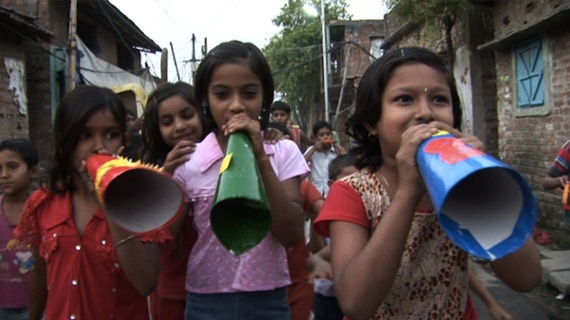 I just heard a story that I adore. It comes from Ali Raza Khan, an Ashoka social entrepreneur and education reformer in Pakistan.

Last year, he challenged 6,000 poor students across 74 charity government vocational schools to create ventures within a month. He went to them and said, "I believe in you. You can all start businesses and citizen groups and you can all succeed." He said this to all the students in all the schools, none coming from privilege.

He helped them organize into peer teams and get started sharing ideas, helping each other, building things together. He banished trainings because they are where someone tells you what to do. His organization provided modest seed capital to each team, agreeing to absorb any loss.

A month later, over 80 percent of the students had profitable ventures up and running, with very few teams not succeeding.

I love this because it shows that the problem isn't young people - it's us. We create a poisonous atmosphere when we tell young people "you can't" in so many subtle and not so subtle ways. They can - and they must!

Like Ali, almost all of the roughly 1,000 Ashoka Fellows (out of 3,300) who are focused on children and young people do more than believe in them: They put them in charge. So do 200 Ashoka Changemaker Schools and 35 Ashoka-affiliated colleges and universities. The results are dramatic and marvelous. Once a teen has had a dream, built a team, and changed her world, she will be a changemaker for life, contributing again and again to whatever problem needs solving. She has her power. She will never be afraid.

And she will be in great demand. We live in a world where the demand for those who can adapt to and contribute to change is accelerating exponentially, even as the demand for repetitive work is falling just as fast.

For many, many centuries the game was efficiency in repetition (think assembly lines and law firms). You were educated in a skill, be it a barber or a banker, which you would apply within walls for life. A very few orchestrated the many. Life was guided by rules.

In today's change-driven environment, all of those old ways are going through a great extinction.

Success now goes to fast-morphing teams of teams - all of whose members are observing, adapting, spotting opportunities, and helping build and serve new teams of teams around these newly identified goals.

Anyone who cannot play this game is out. You can't play the change game unless you are a changemaker.

How many schools, education reformers, and parents know that they are failing unless their young people are practicing being changemakers? And that the most important educational metric has become: "What percent of any school's students know they are changemakers?"

Education reform that is about equal access to an obsolete system ensures at best a generation of failure. Trying to solve youth unemployment by "giving young people needed skills" is a chimera.

And this is the big one. It changes the most basic structures of society. It is far bigger than any technology-based revolution.

It leads to a wonderful place. An "everyone a changemaker" world is one:

• Where problems cannot outrun solutions.
• That is structurally far more equal because everyone is powerful.
• Where everyone, not just the fortunate elites, can express love and respect in action - the root cause of happiness and health.

The alternative is a deeply divided, angry world.

The challenge for leaders - and all of us - is to recognize and welcome the fact that we are at a turning point - and now change everything from growing up to how we lead.

This post is part of a "Thriving in a World of Change" series produced by The Huffington Post and Ashoka. The series is part of The Huffington Post's coverage of The World Economic Forum's Annual Meeting, and explores how, in an age of unprecedented change and connectivity, we must transition quickly to an everyone-a-contributor world with empathetic ethics at its core. Read all the posts in the series here.

The Photo provided is from Revolutionary Optimists, a film about Ashoka Fellow, Amlan Ganguly