Only two budget proposals are being 'taken seriously' in Washington right now. One adopts the rhetoric of "austerity economics," that grab-bag of right-wing misconceptions that's weakened the British economy and wounded its ruling coalition.

The other comes from the Republicans.

There's a third budget plan, too. It reflects the views most Americans hold - including, in some cases, most Republicans . But it's either being ignored or contemptuously dismissed by the People That Matter, apparently for that most traditionally British of reasons: it doesn't come from "the right sort of people."

What this country really needs right now is an opposition party, one that refuses to accept stale and discredited conservative ideas. The President and other Democrats have been governing as if they were in a coalition government with Republicans - and sometimes like the junior partner in that coalition. There are better ways to serve themselves, their party, and their country.

The front page of a Los Angeles weekly published last week illustrates just how skewed the American debate has become: 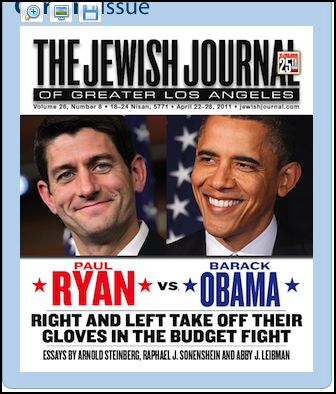 Granted, the Los Angeles Jewish Journal isn't a Beltway opinion shaper (although my colleague Marty Kaplan is a columnist there). But their headline shows how the Washington consensus has distorted public perception outside the Beltway. To many people President Obama represents the 'leftmost' side of the spectrum, even though his budget plan borrows liberally (you should forgive the expression) from a right-leaning philosophy that's rapidly losing credibility.

We're having a crucial national debate about our priorities and governing philosophies. That's a heck of a time for President Obama to position himself as the American Nick Clegg. Clegg, the leader of Great Britain's centrist Liberal Democrats, formed a coalition government with the Conservatives and gave their austerity program an aura of reasonableness and a dash of youthful vigor. Like Obama, Clegg strikes a Januslike pose, with rhetoric that faces left and compromises that face right. Clegg and his senior partner, Prime Minister David Cameron, even embraced a favorite slogan of the President's when they said they would "agree to disagree" on crucial matters.

It's not going well. While the British Conservatives are far more civilized than their American counterparts, they're still happy to undercut Clegg whenever it suits them. Clegg's posture of "reasonable centrism" has cost him both his base and swing voters, and has left him holding the bag as the economy flounders. Only 9% of likely voters now say they'll vote for a Liberal Democrat, down from a high of 30% one year ago. The Labor Party, which suffered what might be called a "whuppin'" last year, now dominates the polls at 39%. The Conservatives are holding steady at 35%, but austerity measures have cost Mr. Clegg's party most of the country's 'persuadable' and independent voters.

As well they should. As the New York Times reports, retail sales have fallen 2.5% in the year since Great Britain's austerity program began. Household income is projected to fall another 2%. Hundreds of thousands of jobs are being lost as a result of the cuts, triggering fears of another recession.

Of course, Great Britain is not the United States. Conservative leader Cameron is well to the left of American conservatives, and in many ways he's to the left of President Obama too. Cameron supports the country's national health system and is resisting calls to lower the top tax rate for high earners from its present level of 50%. President Obama, by contrast, is proposing to raise the top rate to 39.5% and offered only lip service to the public option.

And Great Britain has three major parties, not two. That means voters who aren't happy with the Conservative/Liberal Democratic coalition have an alternative.

Great Britain is a parliamentary democracy with a tradition of the "loyal opposition." As Clegg triangulated, the Labor Party assumed that role. And as the Liberal Democrats' fortunes have fallen, Labor's have risen. Where's our loyal opposition, our alternative to unpopular and failed austerity policies?

It might surprise most newspaper readers or cable news watchers, but there is one. It's in a subset of the Democratic Party called the Progressive Congressional Caucus. They've released a budget proposal that's more fiscally responsible than Ryan's, and which more accurately reflects voters' preferences.

But their budget plan has a serious problem: It has the word "progressive" attached to it. That immediately provokes an attitude of contemptuous dismissal from the media herd. (See the ever-predictable Dana Milbank for one of the saddest examples of this. I fear for his state of mind if he ever realizes his impact on the national discourse. That's not "snark." I really do.)

If the "P word" were stripped from its title page and this budget was given a dummy name (like the "American Business and Stability Council Plan For Economic Growth"), it would poll like gangbusters and be met with the appropriate journalistic genuflections. But the "P" is there (and so is the unfortunate name "the People's Budget"). That's one of the reasons that reporters are either mocking it Milbank style or, more typically, ignoring it altogether.

A Plan That Works

The Progressive Caucus budget actually cuts the deficit, which Paul Ryan's extremist plan fails to do. And where Ryan's budget was rejected in polling, polls suggest that the policies in this proposal would be even more popular than the President's. On the revenue side, for example, it creates additional brackets for very high earners and it establishes a more progressive estate tax that asks a bit more from the Paris Hiltons among us. In other words, this proposal does exactly what the public wants: It raises taxes on the rich.

The Progressive budget also addresses Social Security in the manner that's supported by strong majorities in both parties and among Tea Partiers and independents - first, by separating that program from an overall deficit discussion, and then by eliminating the payroll tax cap for employers and raising it for employee contributions. The proposal cuts more from the defense budget, which is also highly popular, and it restores the public option for health care (which received wide public support last year, including from a slim majority of Republicans in swing districts).

The Progressive budget also provides funds for creating jobs. Post-election polling showed that jobs are a much higher priority for the public than deficits, and recent polling confirms that.

Obama's budget, by contrast, embraces the unpopular personal proposals from Erskine Bowles and Alan Simpson. It embraces the right-wing formulation of "two thirds spending cuts and one-third revenue increases," which ignores the stimulative effect of government spending. While the President's rhetoric is powerful, his proposal only offers a nebulous, Clegg-like cloud. The Republican Ryan budget, on the other hand, is clear and direct. (The President's proposal does, of course, have the virtue of not being pathologically destructive to the American dream - but that's setting the bar a little low, isn't it?)

Obama's proposal would be considered center/right by any reasonable measure. Now it's being upstaged by negotiations among the Senate's "Gang of Six," a group of three center/right Democrats and three Republicans. They're using the leverage given to them by that body's undemocratic structure to attempt a "compromise" - between the far-right GOP proposal, and the position of Democrats like Dick Durbin, who tacked to the right of the President even before negotiations begin.

That's not what the public wants. But if the progressive proposal's such an exciting road to fiscal and political success, and is supported by Democratic House leader Nancy Pelosi, how did the Jewish Journal come to believe that Obama represents the "left" side of the political spectrum?

I'd have to agree with the argument which says the progressive proposal is getting ignored because it won't get passed or even influence the final outcome. Its invisibility seems to say more about our media's "who's in/who's out" mindset than it does any Pravda-like suppression of dissident ideas.

But it's only treated as irrelevant because the Congressional Democrats have been marginalized by their own party, starting at the top with the White House and extending to the Senate. The President and the Senate leadership don't believe for a second that House Democrats will refuse to pass a budget that's been hammered out by President Obama - or by the Gang of Six, for that matter. They could probably defeat it if they did, but it's assumed that they'll be "responsible."

What's more, the White House has pre-empted and marginalized the progressive representatives with its centrist budget and talking points. As The Hill reports, "This year's budget battles have forged a loose bond between President Obama and Steny Hoyer (D-Md.) while revealing some distance between the White House and Nancy Pelosi (D-Calif.)." Hoyer's right-leaning opinions and longstanding intention to cut Social Security are unpopular with the general public, but they make him a handy ally for the Simpson/Bowles White House.

That leaves proposals like the Progressive Caucus budget out in the cold, even though they reflect majority opinion. Most people don't even know it exists. A Google News search on the phrase "Gang of Six" came up with 4,280 hits today, while "Ryan budget" came up with more than 16,000. "Progressive caucus budget" got 363 hits.

The President's lofty "the parties should stop squabbling" approach to the budget debate seems to be part of his approach toward winning re-election (although it's more likely to backfire). But it's no way to lead in a two-party democracy.

There's no doubt that the President can lead. As McClatchy reported, "Support for higher taxes rose by 5 percentage points after Obama called for that as one element of his deficit-reduction strategy last week. Opposition dropped by 6 points." But if he raises expectations only to abandon them without a serious fight, he won't be serving his country or his own future very well.

Voters don't want radical austerity that supports the newly rich, and they don't want "austerity lite" either. The President and his party should consider the fate of Nick Clegg and his Liberal Democrats before committing themselves to joining with the right in a "coalition government" that's doomed to fail. Sure, they'll eventually have to compromise to keep the government running. But before they do they should offer voters a real alternative, not just a cup of weak tea whose only good quality is that it's not Republican cyanide.

This post was produced as part of the Curbing Wall Street project and the Strengthen Social Security campaign.