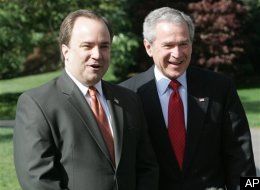 If you've been hunting for coverage of Scott McClellan's book in the Washington Post, you've likely noted what a struggle it's been. Here's some sweet relief. The Post's coverage has been found: third item, nineteenth paragraph of Al Kamen's "In The Loop" column. As a matter of priority, it rates just above a paragraph that revisits former Attorney General John Ashcroft's historic difficulties with boobies, and Post readers difficulties seeing same. Really, just fantastic enterprise reporting from the Post.

Post reporter Anne Kornblut was pressed on the paper's lack of coverage in today's "Post Politics Hour" chat. "Why did The Washington Post (and The New York Times) bury the story on Scott McClellan's confession regarding President Bush?" Her response:

I guess I would disagree that we "buried" it, though it's true it wasn't on the front page. So far, we have only a very brief excerpt from McClellan's book to work with, and some of the context surrounding the incident (about his conveying false information to the public, for those of you who haven't read it) has not yet been disclosed, but hopefully will be when the book is published.

In their defense, the Post parries by posting a link to this article, but it's a wire story, originally from the AP.