"Iran reaffirms that under no circumstances will Iran ever seek, develop, or acquire any nuclear weapons." With that statement, taken from the first paragraph of the Joint Comprehensive Plan of Action or JCPOA, the entire Iranian nuclear issue should be resolved. However, the United States (along with the rest of the world) does not trust the Iranians, which is why there is an additional 159 pages of text outlining the inspections regime and the sanctions roll-back or reimplementation.

If a country (or groups of bad actors, read: terrorists) really wants a nuclear weapon, they're going to get one, and nothing short of killing them all can truly prevent that from happening. The other option is to delay that acquisition through military, financial, or diplomatic means and if you're insanely lucky (which can't ever be counted on), perhaps that delay leads to a change in the seekers' end goal at some point along the way. 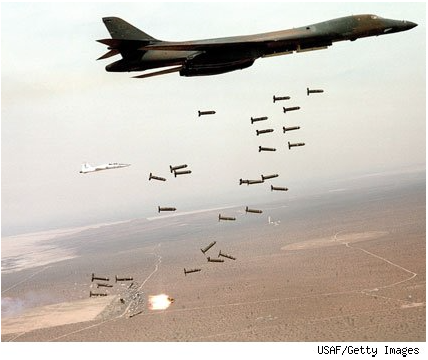 In the case of Iran, some would argue 'Why not kill them all?' Let's suppose the decision has been made to end the Iranian nuclear ambition through violence -- who is the real target? 77 million Iranian citizens? 120,000 members of the Revolutionary Guard Corps? Or maybe only the 424 combined members of Iran's government, including the Parliament, Assembly of Experts, Council of Guardians, Expediency Council, President, and Supreme Leader. None of those options are likely to appeal to Americans, Israelis, or members of the U.N. Security Council, which means such an attack will lack global support by any definition. Thus, "killing them all" must be taken off the realistic menu of options.

That leaves delay by military, financial, and diplomatic means as plausible options. Sen. Tom Cotton (R-AR) suggests that a military strike would send Iran "back to day zero." While undoubtedly true based on the American military's firepower, there are certainly unintended consequences with a military strike of that size (see the above squeamishness about indiscriminately killing Iranians). To really roll Iran's program back would mean more than a few days of air strikes; it would inevitably involve boots on the ground, lengthening the time Iran has to prepare and putting the U.S. and allies in the ongoing uncomfortable position of placing men and women in harms way.

So fine, Sen. Cotton is out of his mind, or maybe just a little too optimistic. What about surgical strikes--perhaps with the Massive Ordnance Penetrators -- 15 ton, rock, and cement destroying 6,000 pound bomb designed specifically for underground Iranian facilities?

But even someone as pro-preemptive strike as John Bolton has confirmed that surgical strikes are just a delay tactic The overwhelming majority of experts say a preemptive airstrike against Iran's nuclear infrastructure would at best delay the program by two (if Israel acted alone) to four years. A preemptive airstrike--even with global support--also leads to horrible direct (attacks on U.S. or allies by Iran) and indirect (global attacks by Iranian proxies such as Hamas and Hezbollah) costs.

However, for financial and diplomatic tactics to have any "teeth," a viable military alternative must be present. The might of the U.S. military and the unquestioned power of the MOP are exactly those "teeth" needed. The military option for preventing an Iranian bomb is not unavailable, nor will it be in case of a future violation. In fact, an argument could be made that the use of military force after an Iranian violation post-deal would be easier to undertake because it would be more likely to have global support than a preemptive strike now. The United States has never shied away from conflicts, however costly and difficult they might be, when it is in our national security interest to engage.

Support for the deal cannot be taken lightly, and clarification about a variety of aspects of the deal - such as, how significant an Iranian violation needs to be to trigger the "snap back" sanctions, better funding for the IAEA and a clearer reporting structure for Congress to be updated on accord compliance.

My parents' apartment in Jerusalem is within about 2000 feet of the Knesset, the Prime Minister's Residence, and the President's residence--well within the blast zone of a nuclear strike from Iran. Their home would fall in the top three targets for any Iranian nuclear strike (the others being Tel Aviv and the nuclear complex at Dimona). "Trust" cannot have any part in a discussion about a nuclear Iran.

It is essential to recognize and internalize that Israeli's fears, my parents included -- has to do with the fact that Iran continues to threaten Israel with destruction and provides the weapons aimed at Israel by remorseless actors who cannot be deterred. All this from a capital, Tehran, closer to Jerusalem than New York City is to Miami.

The concept of a "good deal" is a misnomer and always has been. In any non-proliferation agreement it is often the least worst bad option that can create an opening to a "better deal". In other words, to quote my favorite fictional political consultant: "a good plan today is better than a perfect plan tomorrow" War cannot and should not be considered before all other options have been eliminated. This deal provides the option of significantly curtailing the Iranian program before a single sanction is lifted and keeping it under the vigilant eye of the world for at least the next decade -- three to five times longer than a preemptive strike.