Here are the events and the statements made by the protagonists of these incidents.

On October 24, 1935, Puerto Rico's Insular Police detained Nacionalistas armed with revolvers near the University of Puerto Rico in Río Piedras where some U.P.R. students were protesting against Pedro Albizu Campos, the Nationalists' leader, who had supposedly called the male and female students "effeminate" and "prostitutes" for failing to be at the vanguard in the fight for the island's independence. 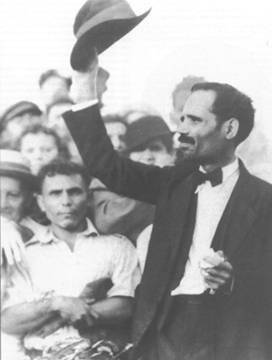 As Chief of the Insular Police, Riggs made the following statement to the press after the gunfight:

"We regret the events in which five citizens lost their lives. But the police has strict orders to enforce the "Law" prohibiting the carrying of arms. It would be anarchy if we allowed armed people to walk freely on our streets constantly threatening our peace and tranquility. I'm not disposed to tolerate this state of disorder. Every citizen has the right to express and defend his political principles, but within the order and serenity which should characterize the actions of every citizen. No one has the right- unless properly authorized- to carry an illegal weapon and establishing a state of mayhem in the community.

If anyone persists in committing these crimes, I will let them know that there will be war, war without end, not against politicians, but against criminals. Whoever resists arrest by an agent of the public order, is a criminal and a savage."

"Nationalism has organized and mobilized the vital strength of Puerto Rico to counter the enemy. The nation has passed from passive resistance to counterattack. The entire nation has condemned these killings and it is firm in its resolution that they will not be repeated... It is the plan to exterminate the Puerto Ricans. But Nationalism has destroyed all Yankee inventions. The enemy has now left only the traditional arms of assassination. The country will vindicate the killings of its heroes, Pagán, Quiñones, Rodríguez-Vega, and Santiago. The Yankee Chief of police, Colonel Francis Riggs, has declared to the nation that there will be war. The Nationalists recognize his frankness and pick up the glove. There will be war. War against the Yankees!"

The question is, why changing Riggs' words? Translation mistakes are common but they are usually minor and should not alter your overarching story, and most certainly, one needs to make sure that at least the title and the basic premise of a manuscript presented as "history" is true to facts.

Why won't Nelson Denis just accept that it is a play on words? Is this just a marketing strategy or does he really believe his own story despite contradicting facts? Did he think he would not be challenged, his "references" checked? Doesn't he know that scores of scholars have worked on this subject for decades and conducted actual research; meaning- not simply reading from other people's books but visiting and discovering archives?

What will it take for more scholars and activists to recognize the damage this fabrication does to Puerto Rico's history? The anti-colonial struggle will not be won with fabrications.