NAIROBI, Kenya (AP) - The three veterans from three different wars had only one good leg among them. But that didn't stop them from summiting Africa's highest mountain. (Scroll down for photos)

The three soldiers -- veterans of Afghanistan, Iraq and Vietnam -- scrambled, clawed and plodded to the top of Tanzania's Mt. Kilimanjaro, hiking up the domed mountain's scree-filled paths on one human leg and five titanium and carbon fiber prosthetics.

They skidded. They fell. They removed their legs to adjust their shoes. And after six days of climbing they stood at 19,336 feet (5,895 meters) -- Africa's highest point.

"The message we're trying to send back to the USA is no matter what disability you have you can be active," said Kirk Bauer, the executive director of Disabled Sports USA and a 62-year-old Vietnam veteran who lost his leg in 1969.

"If three amputees from three different wars and two different generations with literally one good leg can climb Kilimanjaro, our other disabled friends can get out and go hiking or go biking or swim a mile, can get out and lead a healthy life," he said.

The youngest of the veterans, 26-year-old Neil Duncan, lost both legs to a roadside bomb in Afghanistan in 2005. The Denver, Colorado resident tried to summit Kilimanjaro last year, but poor planning and a fast ascent schedule doomed the trip.

This time a different guide planned a route specifically for the veterans. The group took six days to ascend, instead of three or four, and a special permit for the disabled allowed them to spend the night in tents at 19,000 feet (5791 meters). Last Saturday morning they made it to the top.

"It was evidence that with the right planning and right preparation and right execution anything can be done," Duncan said. "That was why I was so set on coming back. I knew it was attainable. It was proof that you can bounce back from a failure in anything. You can regroup, recuperate, replan and use your previous experience and be successful."

The third veteran, Dan Nevins, a 37-year-old from Jacksonville, Florida who lost his legs in Iraq, developed a pressure boil on one of his leg's stumps, which may have lead to his developing of a high fever, coughing and congestion. After reaching the summit and descending to 15,000 feet (4,572 meters), Nevins was evacuated down on a wheeled stretcher.

Kilimanjaro's lower paths are flat dirt, but higher trails turn to a rock and scree blend difficult for prosthetics. In the loose rock the artificial legs slid backward, leading Duncan to feel like he was climbing the mountain twice.

"It's an incredible amount of work as you can imagine but one of the most difficult portions of the whole deal was the assent from 15,500 to 19,000," said Duncan, a student at the University of Denver. The rocks were "real loose, real steep. With having no feet or ankles I was lacking the ability to grip into that dirt."

Going down -- the part many climbers say is the hardest on the body -- was no easier for the amputees. Duncan lost his footing and somersaulted. Bauer's artificial leg fell off.

"I have only one real knee, and it takes an incredible amount of stress from falling," Duncan said. "It's more of a controlled fall down the mountain. It's not a graceful process I assure you."

Duncan, who retired from the Army in 2007, ran with former President George Bush that same year. He hopes to run the Army Ten-Miler in Washington, D.C. in October.

The Kilimanjaro trip was sponsored by Disabled Sport USA and other donors. The group's mission is to provide opportunities for individuals with disabilities to develop independence, fitness and confidence through sports and recreational programs.

"The feeling was total exhaustion and total exhilaration," Bauer said of his 45 minutes on the summit. "It was absolutely spectator." 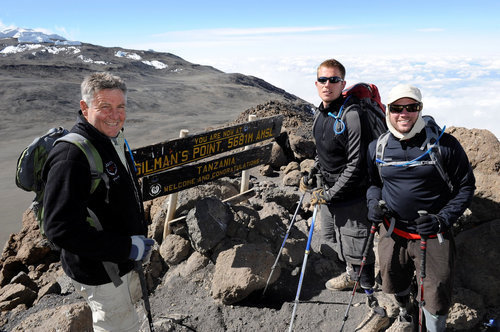 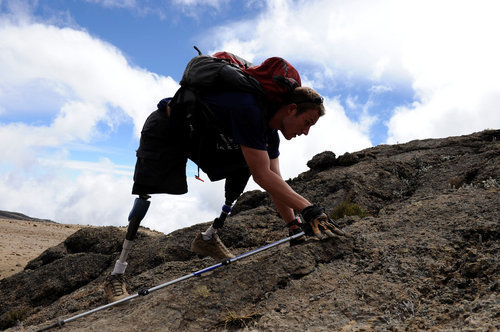 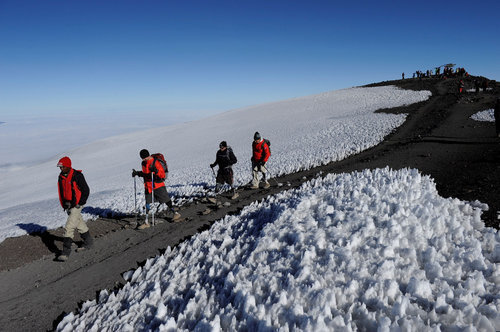 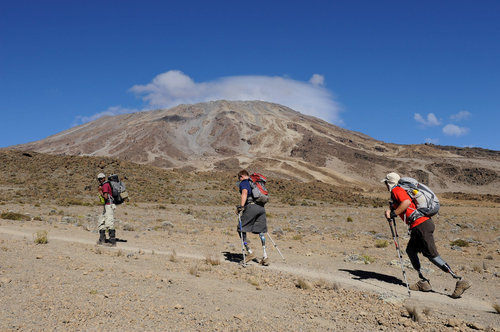