Yet, this is but one of the absurdities peddled by mainstream (neoclassical) economics, which functions as a virus of the mind. Once exposed to the pernicious teachings of the mainstream, even the most progressively inclined requires years of real world therapy to overcome the effects of the virus (I am an example.) 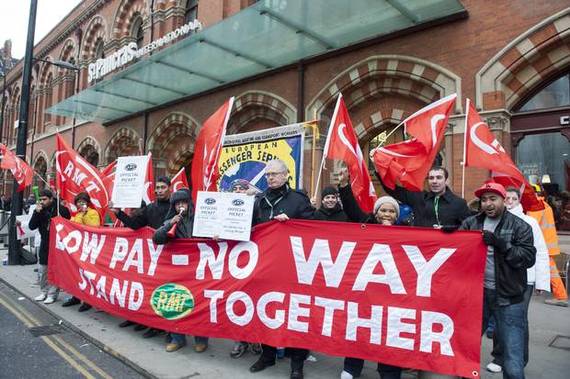 Resources are scarce and wants unlimited (for the poor and the unemployed).
Thanks to Unite the Union for the photograph (I am a member.)

Few progressive economists are more virus-inflected than Paul Krugman. Despite his commendably progressive views on a range of social and political issues, Krugman remains a true believer in the virtues of international trade. His critique of it is limited to concerns about problems created by improperly functioning markets ("market failure") not mainstream trade analysis itself (see his 1997 book, Pop Internationalism, which to my knowledge he has not abandoned).

This loyalty to the mainstream trade ideology goes far to explain his singularly bizarre view of the causes of war. In the August 17 edition of the New York Times he argued that since ancient times wars have been fought "for fun and profit" (his exact words in "Why We Fight Wars", and see my critique in an earlier Huffington Post blog).

He went on to argue that with the increasing integration ("interdependence") among countries during the second half of the 19th century made war among countries irrational because it disrupted the benefits accruing from trade. The argument continues with the stunning insight that wars continue to occur because 1) "leaders may not understand the arithmetic" of the cost-benefit calculations for a war (again, a quotation), or 2) politicians seek an external distraction from domestic maladies.

Other than a passing reference to some rather obscure and methodologically dubious research by a neoclassical economist, Mr. Krugman cites the 1909 book by Norman Angell, Europe's Optical Illusion (Krugman cites the expanded 1910 version that was re-named The Great Illusion). In the book Angell argued that war among countries in an economically integrated world bring no gain even to the victor.

It appears that Mr. Krugman overlooked the irony of the world's most brutal and murderous war to date so soon after the publication of Angell's book. If wars result from mistakes of calculation, the First World War (aka The Great War) stands out as the biggest arithmetical error in the history of humanity. The Second World War would also qualify as a notable error of calculation.

Is it credible that in 1914 political leaders would make a calculation error that resulted in the deaths of 17 million people, then a mere 25 years later their successors would top that with faulty cost-benefit arithmetic leading to a second conflagration that would consume 60 million lives?

Krugman's "war for fun and profit" argument is not only absurd; it is in extremely bad taste, betraying an extraordinary insensitivity. I would have thought that the latter if not the former would have occurred to Mr Krugman by reflecting for a moment on the explicitly genocidal objectives of the Nazi regime. On the contrary, he repeated the argument, much of it word-for-word, in a column on December 21 ("Conquest is for Losers"). The purpose of rerun was to demonstrate the foolish and anachronistic militarism of President Putin of Russia, who according to Mr. Krugman foolishly seeks to enrich Russia by conquest. 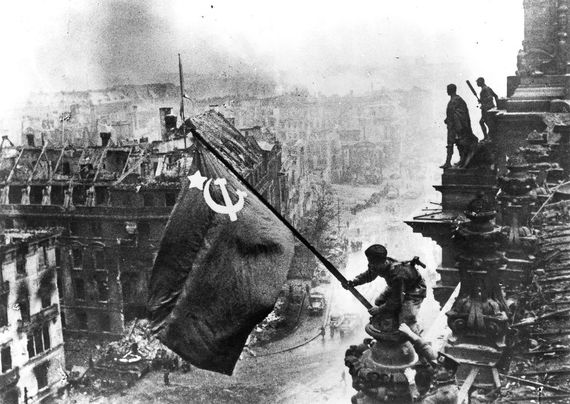 Mr Krugman asks, "Why did Mr Putin do something so stupid" as to provoke conflict with Ukraine? The more relevant question is, why is Mr Krugman so stupid that he has such an absurd explanation of why wars are fought? The question has an obvious answer -- the troglodyte (neoclassical) theory of international trade which Mr. Krugman accepts with only minor revisions.

Mainstream theory of international trade comes down to us not from David Ricardo (to whom it is invariably attributed) but from two Swedes, Eli Heckscher and Bertil Ohlin (worth noting that the latter was for over 20 years leader of the People's Party, the right wing opposition to the Social Democrats, and was the political mirror image of the Swedish progressive Gunnar Myrdal). The "H-O" theory concludes that trade among countries is unambiguously beneficial to all trading parties, raising the standard of loving ("welfare") for all countries.

If we believe mainstream trade theory it follows that war among countries must be irrational just as Mr. Krugman, Mr. Bhagwati, et cetera claim. Why fight a war with blood and gore to get what could be obtained through neighborly bargaining -- "make trade not war, Mr. Putin."

No one should believe the gains from trade story. It is based on fanciful nonsense. The reactionary nature of the story results from two blatant misrepresentation of international exchange. First, the Heckscher-Ohlin theory treats international trade as if it were among countries. In a global market system trade is always among companies, with households far down the distribution line. Second, it views competition among companies as a benign and harmonious process.

These two misrepresentations allow the pernicious fiction that international trade brings to each country more efficient allocation of resources and through greater allocative efficiency cheaper commodities for everyone everywhere. In reality international trade is contest and collusion among great corporations to generate profits. A major part of this profit seeking comes through achieving economic and political power at the national level, by buying elections or buying politicians directly.

A very large portion of cross-border trade occurs not only between companies, but within corporations ("intra-trade"). The motivations for this internal corporate trade include 1) run-away shops to avoid unionization, 2) to escape taxation and 3) to avoid national regulations that prevent destructive environmental practices. Any benefits to the eponymous "consumer" are more than wiped out by job losses, elimination of small producers, the race to the bottom in wages and working conditions, and global pollution.

Trade and Decline of Democracy

Even more important than these negative economic effects of corporate dominated trade is the detrimental impact on democratic institutions. Far from stimulating accord and cooperation as Krugman suggests, unregulated international trade undermines democratic institutions, limiting the policy options of governments. Obvious examples are the two decade old North American Free Trade Agreement and the proposed Trans-Atlantic Trade and Investment Partnership.

In the 21st century the domination of trade among countries by corporations includes restricting the democratic rights of citizens to petition their governments for redress of the damage created by those same corporations. This assault upon democratic governance represents this century's version of what President Franklin D. Roosevelt described in his address to the U.S. Congress in April 1938:

Unhappy events... have re-taught us two simple truths about the liberty of a democratic people. This first truth is that the liberty of a democracy is not safe if the people tolerate the growth of private power to a point where it comes stronger than their democratic state itself. That in its essence is fascism -- ownership of government by an individual, by a group.

Countries integrated into a system of trade may go to war with each other because trade itself contains the source of conflict, aggressive competition among institutions of private power stronger than governments. This may not be rational for "the people" of any of the countries in a conflict. Countries do not have homogenous populations; they are divided into classes and groups. For some groups and classes, armed conflict may bring gains, making the choice for war quite rational even on a cost-benefit calculation.

International trade aggravates the three great crises -- of finance, development and the environment -- and to those three it adds another, of democracy. Far from a benign process fostering harmony and welfare among nations, commodity and service trade, most of it carried out by powerful private institutions, creates tensions, corruption and conflict. As a general rule, wars kill people and enrich corporations. That, Mr. Krugman, explains why not all but most of them continue to occur.

Thanks to Ethics for Adversaries.