If the U.S. military conducted their war games in our world's forests -- setting the Appalachian Trail on fire or strafing bucks, bears, and bobcats in Yosemite with armed drones -- it would seem like the end of the world. Watching in horror as thousands of ambushed animals stampeded through the woods, blood streaming from ears and eyes, we'd demand the military stop its scorched-earth carnage.

We'd set firm environmental laws and limits on where these lethal tests could occur on land; and we'd protect critical wildlife habitat. Why then do we still allow the U.S. Navy to declare worldwide war on our oceans? Why allow sonar tests that will, by the Navy's own estimates, harm and kill 2.8 million more whales and dolphins? 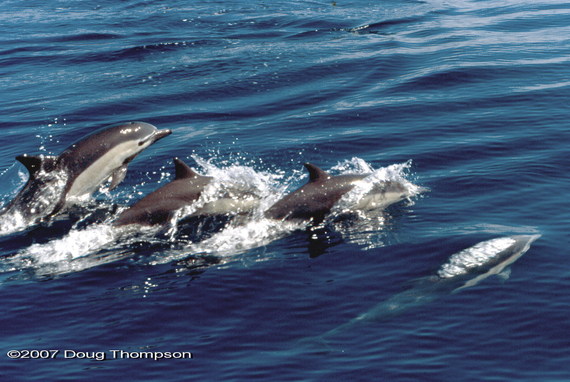 For twenty years, and in more than 50 documented strandings, whales and dolphins have piled up, dead and bloody, on the world's shores -- in Greece, the Bahamas, Puerto Rico, Italy, Spain, Washington state, and the United Kingdom. The dead whales we can see are only the tip of the iceberg of what cetacean scientist and Blackfish cinematographer, Ken Balcomb, calls "an acoustic holocaust."

For years, environmental watch groups like The Humane Society, Earth Justice, and NRDC have continually sued the Navy to limit their war games in waters critical to marine life. But the Navy will not listen to public outcry. Last summer, they even rejected requests from the California Coastal Commission that the Navy stop sonar training when endangered blue whales are in their waters. Is their sonar so loud that the Navy, like whales and dolphins, is also deafened by it?

This spring, there was yet another terrible stranding of endangered deep-diving beaked whales after U.S., Greek, and Israeli navies tested their high-powered sonar in the Mediterranean. Like similar whale deaths in 1996 and 1997 along the Peloponnesian coast, in 2011, on Corfu, and across the Ionian Sea in Italy -- these strandings off the shores of Crete occurred after military sonar testing.

Ample research studies implicate high-intensity sonar tests in cetacean deaths. For animals who see with sound, sonar is, at best, blinding. At worst, the lethal shock waves of sound are so unbearable that desperate whales surface too quickly; they strand alive on shores, dying of "the bends." Necropsies of marine mammals reveal shattered eardrums, ruptured lungs, and massive brain hemorrhages -- a hideous way to die for animals whose acoustic skills are far more advanced than those of humans. 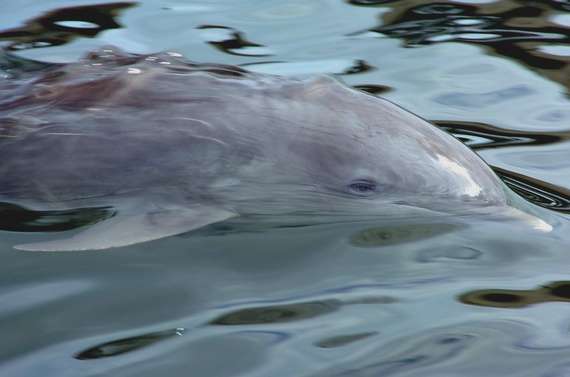 This Crete stranding was preventable had the military heeded scientists. A respected scientific committee (ACCOBAMS) had drawn a map of the Black and Mediterranean Seas in southeastern Crete -- the highly sensitive marine area known as the Hellenic trench -- where sonar should not be tested. Yet this is where the military unleashed its sonar, again decimating deep-diving whales, including a fetus that was close to term.

A Live Science article charges that these Crete military sonar exercises showed, "reckless indifference, like barreling a truck down a crowded city street." Our oceans are not acceptable collateral damage in war games. Because the military mind sees our oceans as just a battlefield, we cannot trust them to protect the oceans they patrol. That job belongs to science and governments -- and us. There is urgency now to the conservation and grassroots efforts to rein in the Navy's relentless and arrogant attacks on our ocean's life support system. The Navy may not be listening, but the people are.

In a riveting and groundbreaking new book, War of the Whales, Joshua Horwitz, chronicles the true story of the 20-year battle led by scientists and environmental activists against military sonar. It reads like the best investigative journalism, with cinematic scenes of strandings and dramatic David-and-Goliath courtroom dramas as activists diligently hold the Navy accountable.

A page-turning detective story, War of the Whales opens with a mysterious stranding of beaked whales off the Bahamas, on the same beach where Ken Balcomb, the Center for Whale Research's principal investigator, has studied the rare Cuvier's Whales for decades. Ironically, during the Vietnam era, Balcomb was a U.S. Navy pilot and oceanographic specialist. Over the years, as more whale strandings are consistently linked to Navy sonar exercises, Balcomb grows from reluctant whistle-blower to passionate protector. He teams up with Joel Reynolds of NRDC to fight the sonar battle in court -- and sometimes wins. Only to see the Navy continue to break U.S. environmental law -- but now in international waters.

War of the Whales chillingly tracks the U.S. Navy's culture of secrecy as it collides with environmental groups and grassroots' demand for transparency. A military source told author Horwitz after the recent Crete stranding, "I know those deep waters and undersea caverns. The Navy should never have been testing there -- not again." 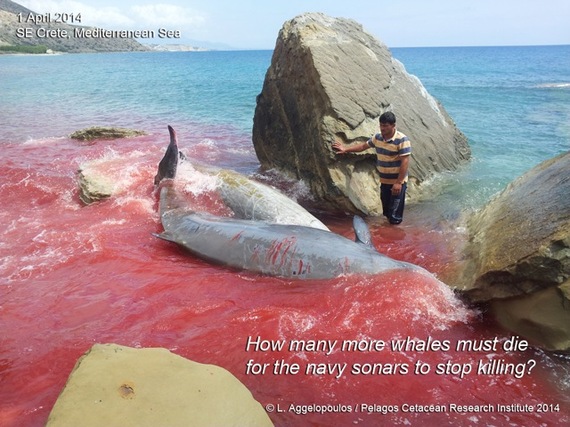 We must hold the Navy accountable as it tests its sonar in international waters without any environmental review. Michael Jasny of NRDC says, "Our oceans are large enough to accommodate whales and military training, if our navies have the will to do the right thing."

The right thing is to insist that the Navy abide by commonsense conservation standards: limit sonar in critical marine habitat and work more cooperatively with environmental groups to protect the oceans they patrol. What does it matter if we can destroy enemy submarines if our oceans are dead?

A military friend of mine confided in me, "Of all the armed forces, the Navy simply does whatever it wants -- and usually in secret. They don't ask permission."

It's time for the Navy to ask our permission before blasting away at already threatened oceans and sea creatures. When the Air Force proposed training runs over Big Sur, we said a sane and very sensible "No!" When the Marine's Camp Pendleton plans its training exercises, they work with environmentalists to avoid harming endangered species. On land, we protect wilderness and species we value. We don't set fire to our forests; we don't test nukes on our own cities. We must apply the same humane and farsighted limits to our sonar and seismic testing -- "from sea to shining sea."

"Marine conservation always lags behind land ethics, because it's not in our backyards," explains Jasny. "The Navy sees the oceans as its domain, not ours."

As many lawsuits make their way through courts and the Navy continues to operate unlawfully outside U.S. waters, we can ask our Commander-in-Chief to consider the bigger picture for oceans. Setting aside or expanding Marine Protected Areas while still allowing a military exemption for sonar testing is not farsighted conservation. To stop this sonar testing, especially in critical whale habitat, President Obama can simply sign an executive order.

Sign a MoveOn.Org petition to the president to stop sonar exercises from killing whales and dolphins.

Brenda Peterson is a National Geographic author who in 1998, was one of the first to write about military sonar in The Seattle Times and in her books SIGHTINGS: The Gray Whale's Mysterious Journey and her Sierra Club novel, Animal Heart. For more: www.BrendaPetersonBooks.com