This article is the second part of the article: Syria, Is It Still About Assad's Fall?

What is happening in Syria is no longer about a democratic movement against a dictatorship, nor is it simply a civil war between two camps. Syria has become the theater of a proxy war which is spilling over to its neighbors. Consequently, to focus only on the departure of President Bashar al-Assad is a strategy doomed to failure because it will not solve the conflict. The crisis is spreading far beyond the person of Bashar al Assad. As a result, demanding the departure of the dictator will not achieve a lasting ceasefire to stop the bloodshed and a transition to a brighter political future for the Syrian people.

Though the humanitarian stakes are high, the European Union (France at the forefront) and the U.S. have chosen their allies and continue to defend geostrategic and economic interests by pushing for the fall of the Syrian regime. To pursue this objective, the political discourse is idealistic and focuses on the massacres and humanitarian issues while national interests are real, but not mentioned.

However, from a realistic point of view, the conflict can be viewed as a broader struggle between mainly Russia and Western countries which attempt to advance their national interests. For the West these interests are isolating Iran and bolstering the strategic and economic alliance with Arab allies like Qatar, which invests in Europe and offers an alternative to Russian gas.

One of the pillars of the U.S. and the E.U. foreign policy is to isolate Iran because of its nuclear program. The fall of a strategic ally of Tehran such as Bashar al-Assad would be a blow to the Islamic Republic in its showdown against Europe, the United States and Israel. Indeed, the strategic alliance with Damascus allows Iran to maintain its Shia "axis of resistance" (Iraq-Syria-Lebanon with the Hezbollah).

On the one hand, these partnerships allow Tehran to counter the isolation imposed by the E.U. and U.S. sanctions. On the other hand, they allow Tehran to maintain proxies that serve as a leverage utilized for negotiations on the nuclear issue with world powers. These proxies also help Iran to counter the threats of Israeli attacks. With this in mind, Bashar al-Assad replaced by an authority that would agree to isolate Iran would favor the interests of the E.U. and Washington, but also the rival Arab countries in the Persian Gulf (mainly Saudi Arabia, Qatar and the United Arab Emirates), and to another extent Israel (depending on the nature of post-Assad government).

France enjoys a privileged partnership with one of Iran's main competitors, namely Qatar. Under Nicolas Sarkozy's presidency, Emir Hamad Ben Khalifa al-Thani was the first Arab State leader to be received at the Elysées Palace in 2007. It is now François Hollande who continues this special relationship. Since his election, Qatar is the country which was received the most at the Elysées with a visit of the Emir on August 22 and two more discreet visits of Prime Minister Hamad bin Jasem al-Thani.

This economic power invests billions in real estate, in the capital of CAC 40 companies (such as Total, Vivendi, Veolia, Lagardère, Suez, LVMH or even Bouygues and Vinci for the different sites of the world to the Qatar 2022 and also the construction of the Friendship Bridge between Qatar and Bahrain), sport (with the purchase of the Parisian club PSG -- soccer and handball), the media (Al Jazeera acquired French Champions League rights) and most recently in projects in the Parisian suburbs.

With the European economic crisis, Qatar's partnership with France gives the small Emirate the ability to sway the French decision-making, something Qatar denies. Same investments in Germany where Qatar holds 17 percent of the capital of Volkswagen, 10 percent of Porsche, 9 percent of the Hochtief construction giant or even more recently 3 percent of Siemens.

The Qatari investments are also important in Great Britain. With 20 percent of the shares of the London Stock Exchange, Qatar is the main shareholder of Barclays. The Emirate has also invested massively in the Olympic Games, it has financed 95 percent of the highest building in London (the Shard) and British homes are supplied by up to 59.3 percent by Qatar's Liquefied Natural Gas (LNG).

As a result, Qatar advances its long-term interest by investing and signing important contracts with the European governments in crisis. Therefore, Qatar -- the first Arab country to propose Arab military intervention -- has more leverage to increase pressure against Damascus and through the U.N. Security Council (leverage Qatar also has in the Arab world through al Jazeera).

However, there is a major actor that does not allow the U.N. to intervene militarily: Russia (along with China). Europe has significant gas energy needs and a quarter of it comes from Russia. 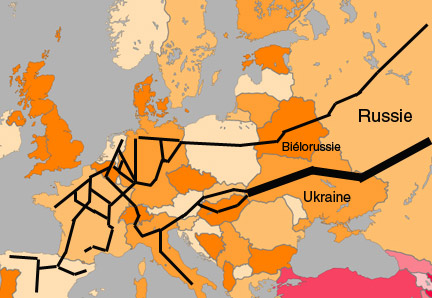 Qatar shares the largest gas field in the world with Iran, the South Pars (Iranian appellation) / North Dome (Qatari appellation). Tensions exist between the two countries because Iran is unable to extract its gas as fast as Qatar, mainly because of the sanctions imposed on Iran (Tehran frowns upon the Qatari extraction which is "emptying" the common gas field). 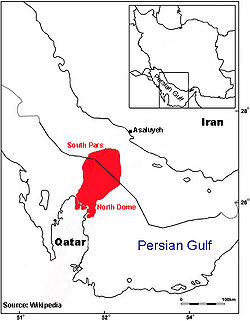 More than a year ago, Iran, Iraq and Syria signed an agreement for the construction of a pipeline supposed to transport gas from the Persian Gulf to the Mediterranean Sea in order to supply Europe.

Meanwhile, Qatar transports its gas through the Strait of Hormuz and is therefore dependent on Iran for its exports (with LNG tankers which then need to pass through the Suez Canal). The Emirate had plans to build a gas pipeline through Saudi Arabia, Jordan and Syria. But, Bashar al-Assad blocked this project, preferring to sign an agreement with his Iranian ally, but above all, to preserve its long-term energy deals with Russia.

As a result, Europe -- which is largely dependent on the Russian giant Gazprom for its energy needs -- has an interest in seeking a competitor to lower its growing gas bill. We understand that a Sunni power could protect a Qatar-Saudi Arabia-Jordan-Syria pipeline to diversify its sources. Besides, this path would allow Europe to further isolate Iran by preventing it getting supplies from a "Shia pipeline" Iran-Iraq-Syria.

Consequently, the centerpiece is Syria and geostrategic realities explain why the Syrian people have become the victims of this bloody proxy war. The different geostrategic interests in Syria explain the positions of the permanent members of the UN Security Council, and the deadlock. It also explains the difference in the framing by world powers that are competing and advancing their own national interest on the Syrian theater.

Political analyst specialized in the Middle East and Iran