For some conservative Christians like O’Reilly, changing “Merry Christmas” to “Happy Holidays” is a sign that it is somehow becoming harder for Christians to practice their faith openly in America.

In response, Christian blogger Rachel Held Evans boiled down the controversy into a simple flow chart. 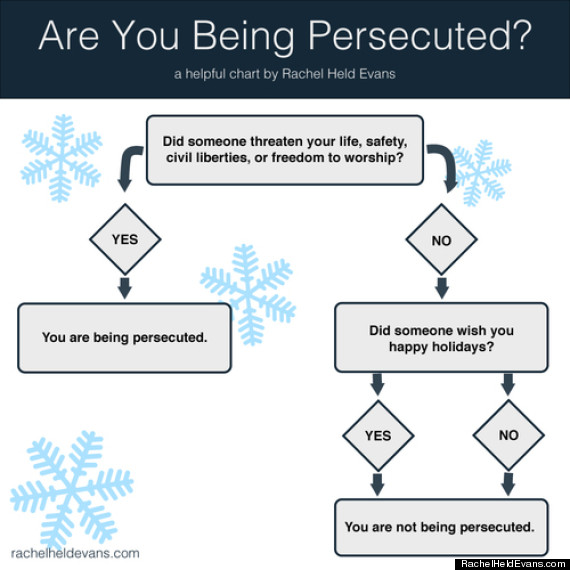 There is real religious persecution happening in the world every day -- houses of worship are being destroyed, people face job discrimination at work, and some are even killed because of their religion.

Evans claims being wished “happy holidays” by a stranger doesn’t amount to persecution because there is no way that God can be kept out of Christmas.

The whole story of Advent is the story of how God can’t be kept out. God is present. God is with us. God shows up—not with a parade but with the whimper of a baby, not among the powerful but among the marginalized, not to the demanding but to the humble. From Advent to Easter, the story of Jesus should teach us that God doesn’t need a mention in our pledge or on our money or over the loudspeaker at the mall to be present, and when we fight like spoiled children to “keep” God in those things, we are fighting for idols. We’re chasing wind.


According to the Pew Research Center, 42 percent of Americans said they wanted stores to greet customers with "Merry Christmas," while 46 percent said it doesn't matter. About 12 percent preferred "Happy Holidays."

For a long, long time Christianity was dominant in the United States and represented the civic religion of the country. But America is about the people who are here now, and that is a much more diverse group. And that's good! It is time to stop insisting that everything revolves around us. Instead, let's join the wider circle of the many traditions that make up our country. Besides, any Christian knows that Christmas is not about displays in shopping malls, or capitols, or schools, it is about a spiritual event that we honor most in our families and our homes.