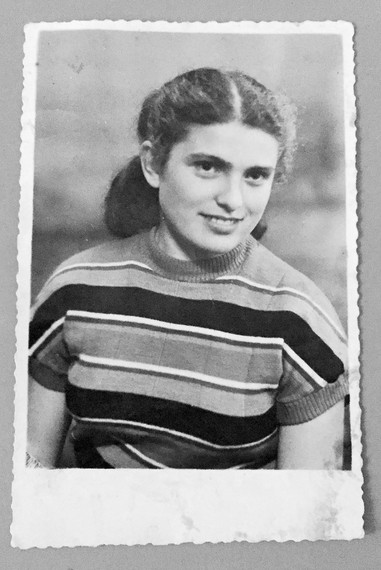 The earliest available photo of Esther

This is the story of Esther, my friend's grandmother. As a mom of two who is constantly preoccupied with safeguarding our kids from danger and also safeguarding our own selves just so that we can take proper care of our kids, I found her story very compelling and worth sharing with the world. So here it is...

Esther was born in early 1936 in the city of Babrujsk in Belarus. When World War II began, Esther's Dad went to fight in the war. Other than that Esther has no memory of him. Mom Taiba, fled the war-torn country with 5 year old Esther & her 1 year old younger brother Alek. The little girl travelled eastward for about 60 kms by foot, holding on to her mom's skirt, to reach the city of Rahachow. Her mom carried baby Alek all the way. At Rahachow they boarded a cargo train bound for Kattakurgan in the Samarkand region of Uzbekistan.

Mapping the journey from Babrujsk to Rahachow to Kattakurgan. Source: google maps

By the time they arrived in Kattakurgan, Alek was paralyzed from hunger. Their new home was a barrack shared with several other families that were seeking refuge in Samarkand. They would sleep on dirt floor and their quarters had no kitchen. Not so surprisingly Taiba got sick. Local health officials took her away from the barracks and admitted her in a hospital. Some neighbours taught little Esther the way to go to the local bazaar where she would ask passersby for food and often ended up with scraps. Whatever little she got, she shared with her brother. On many days, bigger kids would beat her up on the way back from the bazaar and grab the precious little she managed to collect. In due course, Esther contracted Malaria. The residents of the barracks fearing infection left her outside on the street. She was also picked up by the local health workers and taken away for treatment leaving little paralyzed Alek behind in the barracks. He survived without his mom and without his sister...but not for long.

Esther recovered. Her mom recovered. Both returned to the barracks. No sooner did they return than Alek left this world. Esther & Taiba resiliently lived through the war. She was about eight years old when the war came to an end. They retraced the journey back in the same cargo train and returned to Babrujsk only to find their home completely destroyed by bombings. Somehow, they rebuilt their lives. Esther grew up to become a skilled technician who operated heavy duty machinery, a line work that is considered very masculine even now. She married, raised three children and later emigrated to the US in the '90s. In many ways her life is now complete, complete with children, grandchildren, a home and a lovely garden where she grows her own vegetables and fruits.

On the other hand, her brother Alek, and several others like him were robbed off the life they could have had. The sadder part is that even today many children around the world are reliving the same story over and over again. Since the 1900s, we have lost a staggering number of lives to war. The numbers does not include the likes of Alek, who succumbed outside the bull's-eye of war. Nor does it include many others who were disabled for life or contracted deadly diseases afterwards. Recently in June 2015, the UN refugee agency released this report that said that the worldwide refugee numbers are at the highest level ever recorded. And half of all refugees are children.

While many of us who enjoy peace, are involved in raising awareness and funds to fight deadly diseases such as cancer, we barely do anything to promote peace or prevent war. There aren't that many drives to promote this cause. For instance, in 2014, according to this article, globally, we spent about $100B for cancer prevention and cure. I wonder how much the world is investing in preventing or circumventing war. Preventing war not by investing in more weapons but by investing in education and empowerment: Educating those who have not bought into the idea of resolving conflict by other means and empowering those who already have so that our children's lives are not short-circuited by an act of war. My belief is that there's got to be other ways, better ways to resolve conflict and my hope is that as years go by more and more people will see things this way.