Twelve years after 9/11, Americans are sick of war. In poll after poll, majorities say the war in Iraq was a mistake and our troops should come home as soon as possible from Afghanistan. According to a CNN poll released Sept. 10, seven out of 10 said "they didn't see how a strike on Syria would serve the national interest," and three-quarters said the U.S. shouldn't be the world's police force.

Gallup polling conducted Sept. 3-4 found only 36% of Americans supported U.S. military action against Syria, far lower than the 59% who favored war with Iraq in February, 2003, or the 82% who rallied behind invading Afghanistan in October, 2001. In Gallup pollster Andrew Dugan's words, "currently... much of the nation would rather sit this one out." 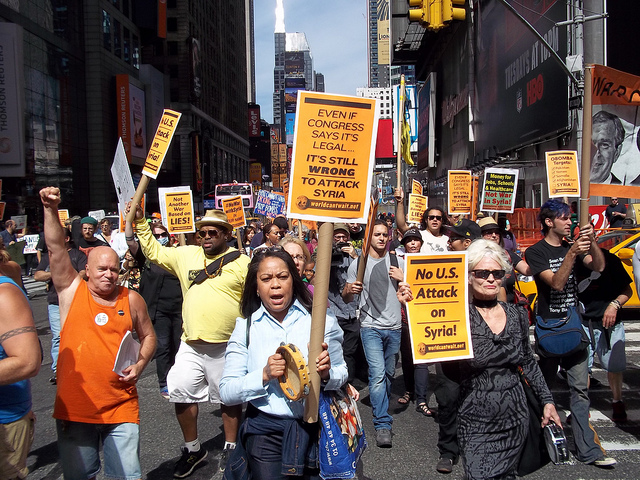 President Obama's ill-conceived push for an immediate military response to Syria's use of chemical weapons (in its brazen August 21 attack on opposition-controlled areas that the U.S. determined killed as many as 1,429 civilians) ran up against this buzzsaw of public opinion. And he found few allies abroad who were willing to go along with the plan. When the British Parliament rejected Prime Minister David Cameron's proposal to join the United States in military action, Obama was forced to slow down.

Seeking political cover, but also recognizing the public's growing anti-war sentiment, the President announced he would ask for Congressional approval authorizing a "limited, proportional" use of force. He explicitly ruled out putting American "boots on the ground." The initial resolution that the Senate Foreign Relations Committee approved stated this "does not authorize the use of the United States Armed Forces on the ground in Syria for the purpose of combat operations." Even Sen. John McCain, a fervent supporter of bombing Syria, said Obama would be impeached if he deployed troops there. 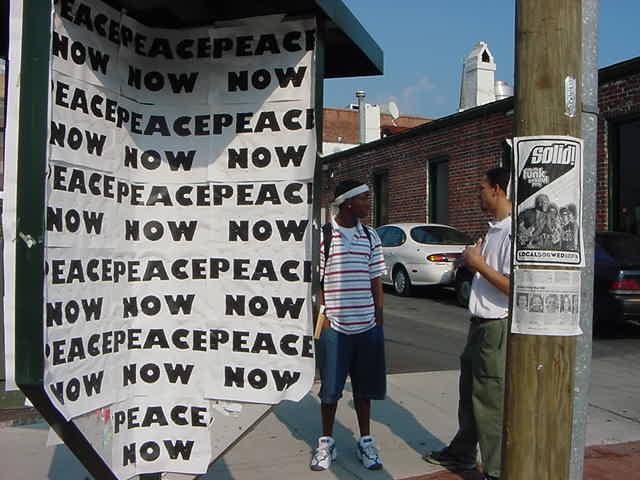 And then, members of Congress got slammed with a tsunami of constituents saying "Hell, No" to any new war adventure in Syria. From red states to blue states, conservatives and liberals found common cause in opposition to a military strike. "Ninety-five percent of my constituents have indicated to me in emails and phone calls that they do not want to see the United States getting involved in a bloody and complicated civil war in Syria - and that certainly has some influence on me," said Sen. Bernie Sanders (D-VT). "My phone calls, emails, and faxes are running 96% no," said Rep. John Culberson (R-Texas). "I've never encountered an issue where you had 96% agreement...our phones are ringing off the wall." Rep. Andy Harris (R-Md.) claimed calls to his office opposing an attack on Syria outnumbered those supporting it by 753-10.

From the beginning, it was highly probable that the President would lose a vote on Syria in the Republican-controlled House. This week, it became clear he could also lose the Senate. So it was a lucky break for Obama, and all of us, that an off-the-cuff comment by Secretary of State Kerry was seized on by the Russians as a potential way to defuse the crisis. Is Russia acting in its own self-interest by trying to head off an attack on its ally, trading partner and weapons client? Without a doubt. Is Syria prepared to willingly hand over all its chemical weapons stocks to international inspectors? Probably not. But the Global War on Terror (brought to us by Bush & Co.) has consumed more than enough U.S. blood and treasure in the past twelve years for every American to welcome any delay in the march towards more war. 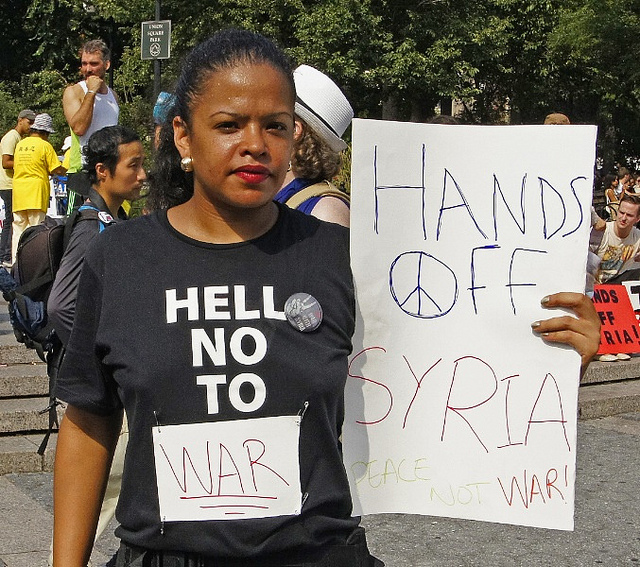 In recent days, some commentators like Washington Post syndicated columnist Robert J. Samuelson have pooh-poohed the concept of war weariness. He reminds us that according to the Congressional Budget Office, the wars in Iraq and Afghanistan cost a combined $1.4 trillion from 2001-2012, but rationalizes that this sum "pales next to all federal spending," $33.3 trillion during the same period.

How many schools could we have built in the U.S. for $1.4 trillion? How many affordable housing developments? How many vacant factories could have been rehabbed and repurposed into start-up incubators for small businesses? What kinds of public transportation projects could we have invested those resources towards? Our nation's infrastructure has been crumbling for decades, and instead of fixing it we've been shoveling cash into the furnaces of the war machine.

To those who would slam Obama for bowing to public pressure on Syria, it's worth remembering that when George W. Bush was in the White House, public opinion didn't count for squat. Our entire nation was strapped into a car with a drunk driver at the wheel, convinced The Decider knew best. And if John McCain, Mitt Romney, or God forbid, President Palin were currently residing at 1600 Pennsylvania Ave., the chances of any of them slowing down a rush to war would be pretty slim.

America never saw the peace dividend that was supposed to come with the end of the Cold War. Instead, George H.W. Bush sent us back to war for oil, and we spent the next decade propping up desert dictatorships to keep the black gold flowing. These policies allowed the military-industrial complex to stay humming, stoked anti-American sentiments in the Middle East, and created fertile ground for extremists like Osama bin Laden to recruit a generation of jihadists to fight us. Which led to another decade of conflict. We can be thankful that twelve years after the horrific events of 9/11, the American public has grown tired of endless war, and is finally daring to imagine a different world. 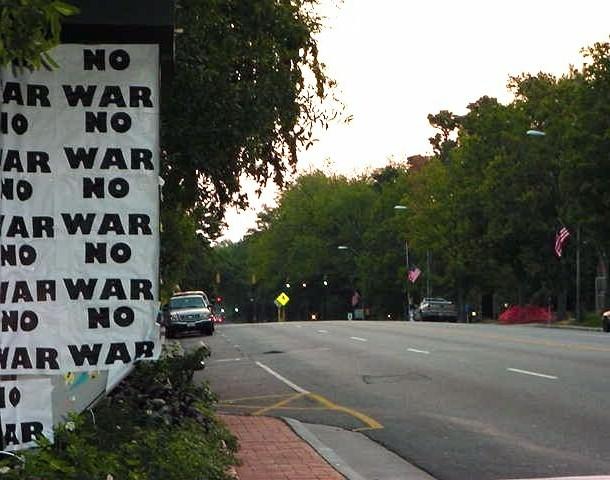