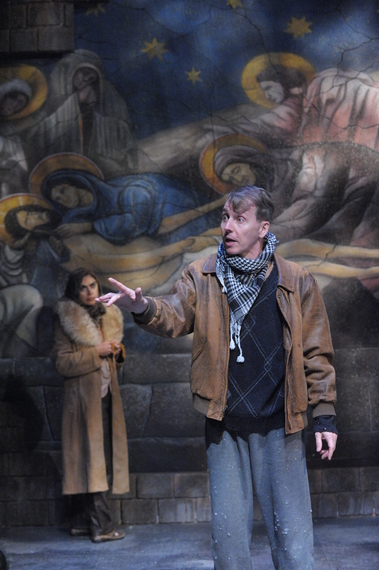 New Yorkers have a rare chance, through August 10, to see a full-cast production of David Edgar's intriguing Pentecost. This weighty, thought-provoking drama is being presented by the Potomac Theatre Project at Atlantic Stage 2. Playgoers in search of grand ideas of international, time-travelling scope on a Stoppardian scale--at a $35 top, no less--are advised to make a quick trip down to West 16th Street.

Pentecost premiered in 1994 at the Royal Shakespeare Company, which earlier hosted the playwright's landmark The Life and Adventures of Nicholas Nickleby. (Pentecost, with thirty characters speaking nine languages and a running time approaching three hours, is intimate only when compared to Nick Nick.) The play transferred from Stratford-upon-Avon to London; a separate, acclaimed production reached the Yale Repertory Theatre the following year; and then--nothing. Edgar's play of ideas was simply too intellectual, as in non-commercial sounding, for Broadway. The play finally reached New York in 2005, in what appears to have been an indifferent off-off Broadway production, but that has been the extent of its local life.

Now it comes to the Atlantic's basement space as a rental booking, produced by the folks at Potomac, a 28-year-old profit which moved from DC to New York in 2007. The unwieldy play features a cast of ten card-carrying Actors' Equity members supplemented by ten college students; Potomac has a longstanding connection with, and is partially funded by, Middlebury College in Vermont. But there is nothing academic or collegiate about this production of Pentecost, which originated at Middlebury in the fall of 2013. If this is what comes of the marriage of professional acting companies and university theatre, so be it.

Edgar's two acts offer what might be seen as two almost separate plays, set in an abandoned Romanesque church in an unnamed south-east European country. First comes what might be termed a Renaissance thriller. Gabriella Pecs (Tosca Giustini), a low level curator at the local museum, brings Oliver Davenport (Jonathan Tindle), a low level British art historian, to the church to reveal her discovery: a walled-up fresco in the style of Giotto which possibly predates the great Italian painter. Giotto is considered the father of Renaissance painting, introducing figures drawn naturally from life. Could this hidden fresco be an early Giotto, or even pre-Giotto? What would that mean to European cultural history, and what would it mean if this cultural rebirth occurred not in Italy but in an historically embattled corner on the ramparts of Europe?

This great possible discovery quickly attracts three sparring parties claiming jurisdiction and ownership: the Orthodox Church, the Catholic Church, and the unnamed government. Brought along to combat Pecs and Davenport in their attribution is a crafty American art historian from Cornell, Leo Katz (Alex Draper), who--backed by the church men--turns the discussion into a battle over commerce and sponsorship. They are abruptly interrupted, in an effective first-act climax, by a mass of huddled terroristic refugees.

Thus Pentecost becomes a hostage drama, with countryless wanderers seeking safe asylum and holding the three art experts hostage. Edgar turns his play into a political Babel, with his English-speaking protagonists--and his English-speaking audience--overwhelmed by the desperate horde. (Dialogue flies fast and furious in Arabic, Polish, Russian, Turkish, Azeri, German, Bulgarian and Bosnian.) It all comes around to the fresco on the back wall and its possibly inestimable value. What does one make of a world that will turn its back on these (worthy?) refugees, but will suddenly listen when they threaten to torch a cultural masterpiece? 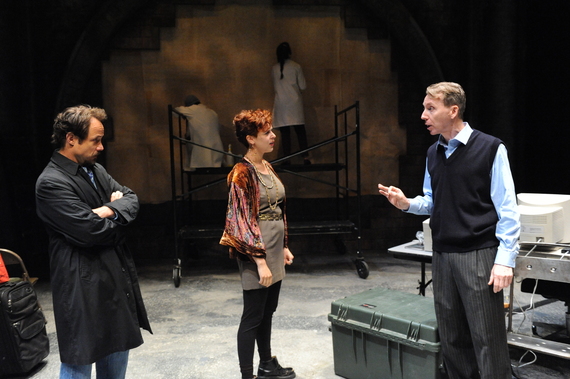 The playing time speeds by under director Cheryl Faraone, co-founder, co-artistic director and producing director of Potomac. (Faraone is also a professor at Middlebury.) Mark Evancho's set and Hallie Zieselman's lighting enhance the cloistered atmosphere. Tindle, Draper, and the young Ms. Giustini do equally well, drawing us into their characters' devotion to art and hinting at interpersonal undercurrents. The competing Fathers--Lawrence Nathanson as the bulky Orthodox one and Christo Grabowski as the slim Catholic--are proficient, while Mari Vial-Golden brings life to the refugees as a displaced Palestinian Kuwaiti.

Edgar uses this character to tear into the American, a natural target as his passport reveals that his name is "Katz"; when the comparatively familiar hostage drama of the second act threatens to dull our attention, the philosophical battle between Draper and Vial-Golden bring the play back to life. (Giustini and Vial-Gordon are excellent, even if they are non-Equity Middlebury students. Some of the other student actors, though, could profitably use more direction.)

In any case, the under-the-radar, low profile and economically restrained conditions have resulted in a first class and much welcome production of what turns out to be one of the important plays of the 1990s. Additional performances have been scheduled for the final week--Pentecost is being presented in rep with Howard Barker's Gertrude--which will give high drama-minded New Yorkers a few more opportunities to see a play they ought to know.

Pentecost, by David Edgar, opened July 24, 2014 and continues through August 10 at Atlantic Stage 2