"Ward Hall - King of the Sideshow!" is the first-ever biography of the man who has helped shape the American Circus Sideshow into what it has become today.

Ward has the memory of an elephant, the exaggerative dialogue of a Ginsu Knife salesman and a sequined wardrobe that would have made Liberace turn his head.

Excerpts from Ward Hall -- King of the Sideshow!

Ward Hall joined his first circus in 1944 when he was a 14-year-old kid living in Colorado. A year later, as a 15 year old 10th grade dropout, he ran away for good, joining the Dailey Bros. Circus. He never looked back. By 16 he was performing in a sideshow and by age 21, he owned a sideshow!

***
It was spring 1946, Ward was 15, and he was prepared, or at least he thought he was, when a Billboard ad caught his attention. Dailey Bros. Circus was looking for a magician and fire eater. He didn't know how to do either very well. He didn't tell them he was only 15, and he didn't have a plan. He just knew he had to join the show at that time. Ward responded to Milt Robbins asking for the job, and soon a telegram arrived that read:

Ward daringly told his father that he was going to leave and take the job with the circus. His father didn't argue, telling Ward that he would get the circus out of his system and be "back in two weeks." Ward laughs. "They are still waiting for me."

Using what he had left of his last paycheck from the part-time job he had on the railroad to buy a $51.50 bus ticket, he caught up with Dailey Bros., still at its winter quarters in Central Texas. He borrowed his uncle's steamer trunk, packed it with his one suit, a few other pieces of clothing and a small collection of homemade magic tricks. The day he climbed off the bus in Gonzales, Ward recalls thinking that at that point, he "was beginning the second part of my life. On that momentous day, my childhood ended." It was March 27, 1946 - 116 days before his 16th birthday.

Anxious to get on with his life, he arrived in Gonzales more than two weeks early. Instead of the circus bosses sending him home, he was put to task on several small projects. He slept in a small shed along with sideshow equipment that would be traveling with the show that year. Ward's pay was $30 a week with cookhouse privileges, which meant he could eat at the official circus cookhouse and share a berth on Car 79 of the circus train when the show hit the road.

While new to the circus itself, he had a pretty good idea of what to expect before he stepped off that bus, having been reading news and stories about the big top in Billboard for years.

It didn't take Ward long to be noticed on the lot, but not necessarily in an endearing way. On his second day, he decided to further educate himself on fire eating, having never truly learned the skill. In his letter to Robbins, Ward claimed he could eat fire, so he thought he had better learn as soon as possible. On his first attempt he badly scorched his lips, turned around in pain, kicked over the fuel can and caught the shed on fire. Needless to say, a good eye was kept on this aggressive but polite newcomer to the business from that point on. Ward moved into the men's dormitory where he spent only a few nights. "Having been a loner all my life, I was not knowledgeable on how men act after drinking large quantities of alcohol, so I discovered an abandoned circus wagon which became my living quarters until we moved onto the train."

***
In August 1973, while playing in Indianapolis, Ward appeared in a television special called On Location: Alan King at the Indiana State Fair. Alan King kept asking very basic and non-informed questions and it was obvious to Ward that King didn't quite understand, or like, the sideshow business. "I can't imagine why anyone would pay 50-cents to see this stuff," the comedian told Ward, referring to the sideshow acts. Taken aback, Ward retorted, "I can't imagine someone paying $5 to go to a nightclub to see your act." King bragged, "They pay $15." To which Ward responded: "That's actually worse!" The network edited out that exchange, but the edited segment effectively showed that freak shows "provide honorable livelihoods for handicapped men and women who otherwise might be unemployable."

***
With the life that Ward Hall has led, it seems impossible that one single event would stand out to him as the best. What's even more improbable is that event had nothing to do with a sideshow.

On April 22, 1994, Ward was the singing master of ceremonies at Carnegie Hall for Circus Blues, a show that was part of The Carnegie Hall Folk Festival. Stephen Holden, a reviewer with the New York Times, attended the show and wrote of Ward. "Wearing a sequined top hat and tails, Ward Hall, a former lion tamer and pitchman, presided over the program of old-time circus musicians, like Ralph Edwards leading a big top version of This is Your Life. Ward sang three numbers with the orchestra to get the show under way. "Hi, Neighbor!," "There'll Be Some Changes Made," and "When You're Smiling." Among the musical guests on the same bill were Blind Willy, Guitar Gabriel (Robert Lewis Jones), Diamond Tooth Mary and Willa Mae Buckner.

"I have said it many, many times that singing at Carnegie Hall in New York City was the highlight of my life," said Ward. "It's the one singular thing that I have enjoyed most, and being a part of that program is one of my proudest moments." Surprisingly, not too many people who know of Ward and his sideshow prowess know that the Carnegie Hall event took place, said Ward. "I don't usually tell people that I sang at Carnegie Hall. It is so unbelievable that this sideshow bum would have been top billed in a program at Carnegie - with great reviews the
following day."

***
Ward celebrates 70 years of working in the weird, wacky and wild world of the sideshow in 2014. Now 84 years old, he doesn't travel often with his show and he has passed the baton on to a younger generation who are now his partners. But he checks in daily and occasionally surprises them all by showing up in his red, sequined jacket, taking the microphone as he immediately starts attracting the curious to the front of the tent. There is only one person silver throated kind of the carnival talkers who could do that, Ward Hall.

__________
Tim R. O'Brien is the author of Ward Hall -- King of the Sideshow!, available wherever books are sold and online at Amazon.com and Casaflamingo.com. 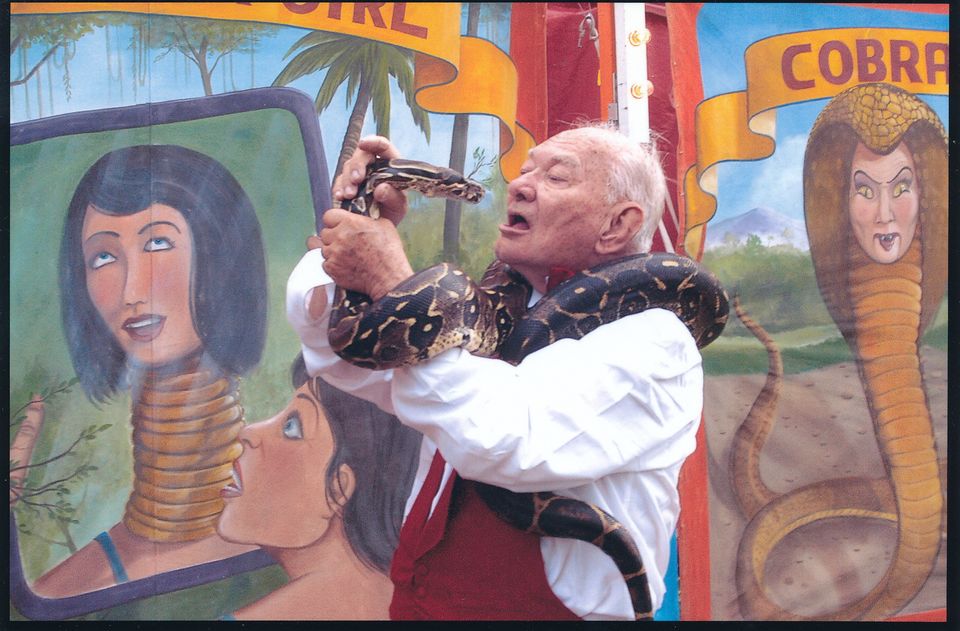