The compelling and mysterious photographs of Australian artist Ward Roberts ask more questions than they answer -- to begin with, why are they photographs at all? Their profoundly delicate and counterintuitively abstract aesthetic in some ways more closely resembles minimalist color field paintings than the detail-rich conventions of the urban and natural-world landscape photography which is in fact what they are. Roberts' pictures are of cities, lakes, plazas, public spaces, beaches, parks, conference rooms and so on -- all the regular kinds of places one might go in the normal course of life in town or countryside. But in Roberts' camera, they are regularly made strange. Whether surreally depopulated locations of public assembly, or images that are themselves devoid of orienting detail -- in other words whether by context or by content -- their first impression is one of emptiness. But they are none of them truly empty. Better to say, they are full of emptiness. 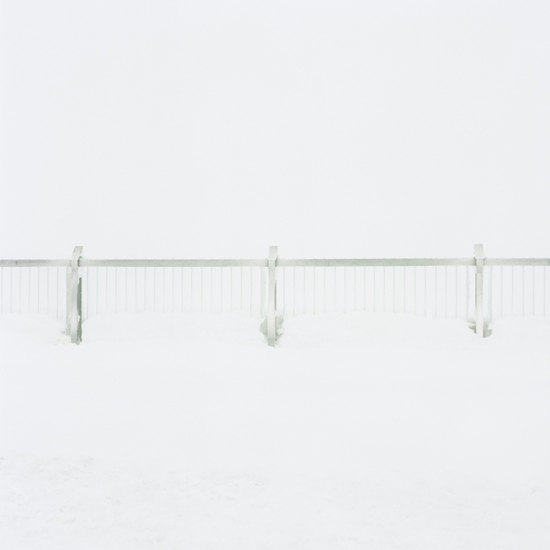 What Roberts offers are not so much pictures "of" but rather pictures "about" their stated subjects. In this inverting of the normative function of photography, Roberts' photographs deliberately push the genre's comfort zone. They replace depiction of the world with evidence of the artist's presence at their creation and in that sense as well as in their appearance, they are painterly. But because of their conceptual tethering to the outside world, they must only be photographs. "I experimented with painting, but there was just something about the process of photography -- physically, mentally, visually -- that resonates for me. I started out shooting black and white and working in the darkroom, then (like so many) I discovered digital. But eventually I gravitated back toward film. I love how the grain massages the tone, the range of color, contrast, and organic qualities. Digital is for perfection. And you know, the world is not perfect and neither are the people in it." 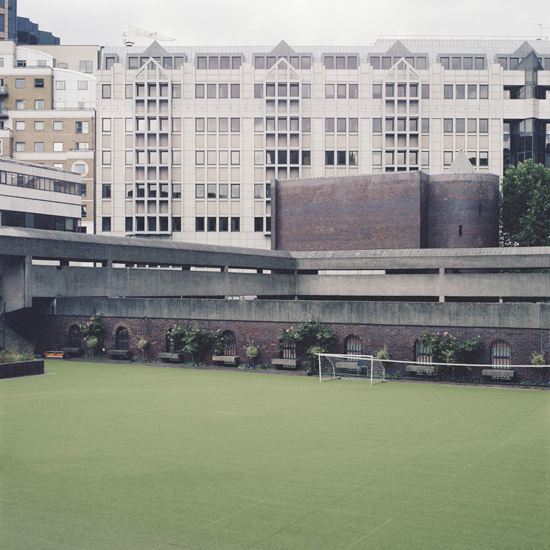 Though it didn't start out that way, over recent years his work has tended increasingly toward the reductive and ethereal. In series like "[ ]" and "M" for example, the specific attributes of the people, places, and things he photographs are erased -- or more precisely, obscured -- from the very film that captures them. What remains is a language of restrained gesture and whispered hints -- the back of a traffic sign, the edge of an overturned construction cone, the mere suspicion of a horizon line. Vistas vibrate like color field paintings, or show off shades of white. They are more like advanced studies in chromatic gradation than investigations in space or narrative or even symbolism. These realms may look like the products of pure imagination, but it is central to their meaning that they are in fact real. The main reason they have to be photographs is that in a certain sense, photography itself is their true subject. 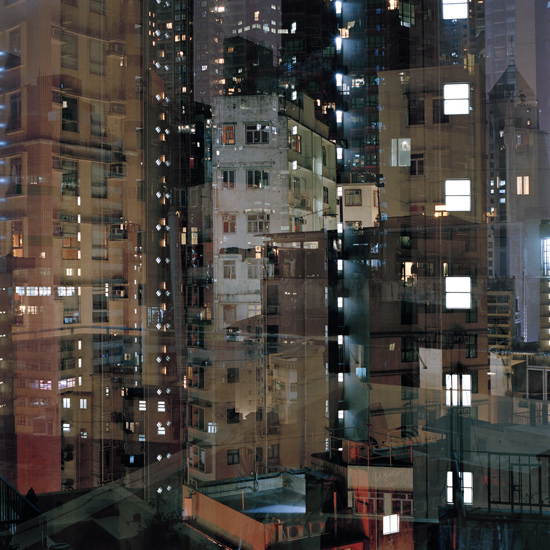 Even Roberts' previous and ongoing series such as the "Billions" and "Courts" pictures which seek out and contain wealths of information also spoke a language of ambiguity and abstraction. Early on, he was deeply influenced by National Geographic and other kinds of documentary photography. His father was a pilot, and they saw the world. Currently based in Melbourne, he grew up in Hong Kong and that city "will always be predominant in my work and style." It's tempting to see the "Billions" series -- in which that teeming city of both horizontal and vertical sprawl is photographed in a way that both depicts and evokes its 24-hour jumble of enterprise -- as being fairly straightforward. Plus, the "Billions" series took four years to shoot, because he wanted a specific time of year in Hong Kong, a certain quality of light you only get between January and March. But Roberts is quick to point out that in fact, "It is not about the city itself per se; it's a way to interpret the concept of dense population centers." In "Billions," layered images represent layered humanity and layered experience. This is what Roberts calls, "the feeling you get of being both connected and isolated." As with all his work, the images are built in-camera; in this case by using multiple exposures on film -- a technique that in itself approximates the unpredictable tumult of the city, even as it obfuscates its specific attributes. 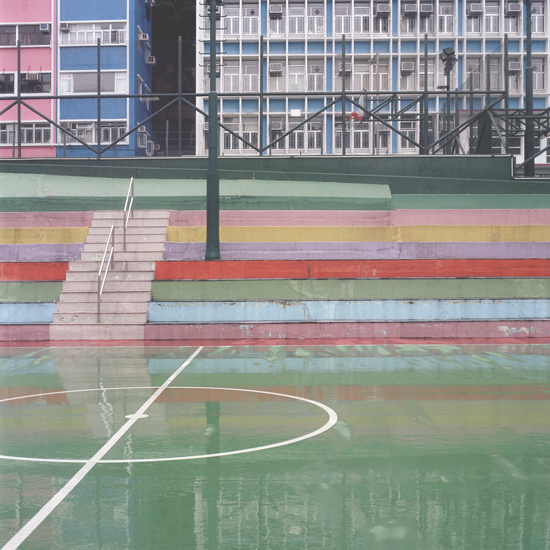 The evolution of his style between and among series has unfolded intuitively from there, following a scenic but traceable route from where he started to where he is. The sumptuously pictorial series "Courts" first emerged in 2007-08 as a self-contained series from an aspect of the urban landscape adventures. A compendium of photographs of athletic courts -- tennis, soccer, basketball, etc. -- these sites are often built of painted and colored concrete or wood, and appointed with all the architectural signs of ritualized spectacle. By photographing them completely devoid of people, their structural foundations lose spatial depth and perspective, and come to read like painted color-block, hard-edge abstractions from yet another painterly trajectory. By depriving them of their usual function, they became about something specific, with their own latent, self-contained story to tell. Much has been said about the absence of any people in any of the shots (and the related necessity of his patient lying in wait for such rare depopulated moments to occur). For all that, he's done talking about what it might mean, saying that from now on "people are going to have to decide for themselves," and leaving them plenty of room to insert themselves into both the picture and the allegory. 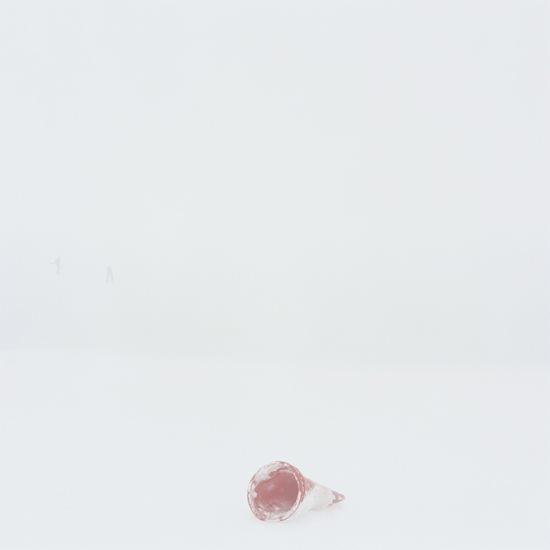 These images also serve as a kind of off-kilter travelogue, documenting a parallel layer of his own experiences traversing and occasional staying on in Cambodia, Hong Kong, really most of Asia, as well as all the European capitals, coastlines, New York City. "I'd love to go to Iceland for six months and work in their harsh and haunting landscapes." This impulse to treat depopulation as a visual condition as well as a societal one -- and one in which the removal of information could paradoxically lead to an expanded understanding of a circumstance -- presaged his ever-increasing abstraction. First people, and then things, began to disappear from his images. "I am interested in the powerful expressions you can create in Minimalism, and I wanted to push and challenge myself and my own style. With the courts I had a recipe that worked every time, and I just felt it should be harder for me. Technology makes life easier; but it's not as satisfying if there's no struggle. And I wanted to see how far I could take it."

The "[ ]" series took it pretty far. Exploring a range of what must surely be dozens of shades of white, in most of these images fully 95 percent of the composition is a dense gauze, while here and there the ghostly outline of a place taking shape. You can almost see them emerge from the haze, as they reveal themselves slowly to patient scrutiny. A metal fence unrolls like filament, an oblique balcony juts into pure nothing, and snow and sand merge into a single texture. The thing about "[ ]" is that it really was shot in a blizzard. "We were caught in a snowstorm five hours from Melbourne. I got mild hypothermia. I could barely see in front of me. There was no horizon line. It was my happy place. I was just lucky I guess!" Yes, quite. The related "M" (minimum) series by comparison has a lot of legible information in the images -- thick trees, still bodies of water, snippets of iconic architecture, stark horizon lines dividing color blocks into rough Rothko halves, a lonely bonfire burning. But as the title implies, these deliberated pictures are neither fully accidental, nor are they fully about adhering to the precepts of Minimalism; it's more like Roberts set himself a challenge to determine the absolute minimum amount of information required to tell a story. One thing these series share is the power to confuse photo-lab technicians. "Every time I drop off rolls at the lab, they always give them back to me with apologies! 'Every frame is ruined, we're so sorry!' And I have to say that, no, that's how I want them..." 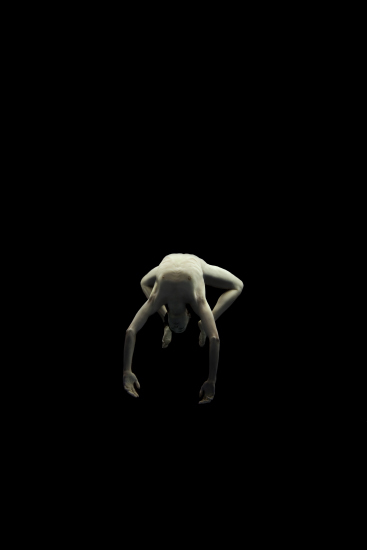 The more recent series he's been working on is, perhaps surprisingly, portrait-based. Roberts produced an earlier portrait series "48 Hours" which was acclaimed for its sexy, sumptuous, haunting quasi-classicism. But it was a long time ago and a galaxy away in terms of process, technique, style, and emotion. Photographing alabaster-pale models floating underwater in inky waters was, finally, "too much production" and prohibitively expensive to produce. It was shot on digital because of being underwater, and it took a year to conquer the process. These new portraits have infinitely more in common with the recent landscapes, and employ the same reductive obfuscation process. "Working with people again is a little uncomfortable; shooting people can be a bit mechanical and awkward -- but of course, I see that as just another boundary to push." So who are these people? "I look for very pale redheads. I also love people with interesting moles or birthmarks. I cast friends, I search online, I post flyers in cafes. My ideal subject would be Tilda Swinton. Ha!" Like with the landscapes, the subjects exist in service to the needs of the pictures. The models' faces and bodies are almost completely obscured along with the landscape setting, as per the artist's consistent approach of taking out as much specific detail as possible without losing the subject completely. "It's like a science experiment."

And speaking of challenges and boundary-blurring, Roberts is already dreaming up a future that strays farther than ever from what is expected, hoping even to experiment with other things besides photography. In 2010 he performed a collaboration with a painter -- it made him uncomfortable, so, you know, perfect. "I'm thinking about sculpture maybe? About an installation rather than a show of framed prints... but of course connecting to photography still... it might not work, you never know until you try it. I'm working with a writer on a collaboration, because I thought, well, I'm not good at stories -- so let's go! I always look for as much control as possible. And I don't like that I want control -- so I try to allow for unpredictability, set myself up to be intruded upon. There is no right answer -- not in life, not in the work. The worst enemy of creativity is perfectionism." Besides if it doesn't work out, there's always Iceland.