According to data from the National Oceanic and Atmospheric Administration, or NOAA, the globe recorded its warmest September on record, tying with 2005 for the title. Global surface temperature records stretch all the way back to 1880. September marked the 331st straight month with above average temperatures, and the 36th straight September with a global temperature above the 20th century average. 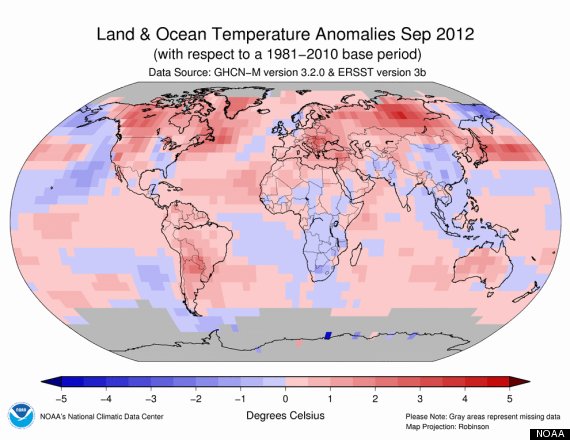 Global surface temperature departures from the 1981-2010 average for the month of September. Credit: NOAA.

The first nine months of 2012 were the eighth warmest such period on record, and barring unusual cold during the October through December period, the year is likely to fall within the top ten warmest years on record globally. In the U.S., the year is on track to be the warmest year on record, after the country experienced its third-warmest summer and warmest spring since records began.

NASA, which uses slightly different methods to keep tabs on the earth's temperature, also found that September was an unusually warm month, although it concluded that it was the fourth-warmest such month on record.

Although the U.S. had a somewhat cooler month — it was only the 23rd warmest September in the lower 48 states, most parts of the globe had above average temperatures for the month. Such areas included parts of Argentina, Australia, Canada, Greenland, Japan, and Russia. Far eastern Russia, western Alaska, southern Africa, parts of the upper Midwest and Southeast U.S., along with much of China, all had below average temperatures for the month.

Global land temperatures were the third-warmest on record for September, while sea surface temperatures tied with 1997 as the second-highest on record, NOAA found. The combined land and ocean average temperature was 1.21°F above the 20th century average.

Ocean temperatures were boosted by a borderline weak El Niño episode on the tropical Pacific Ocean, which is associated with warmer than average water temperatures. According to NOAA, such conditions are likely to continue throughout the winter, with earlier forecasts for a moderate El Niño no longer looking likely. If an El Niño event does occur during the rest of 2012, it could bump global temperatures up further, since such events tend to boost global surface temperatures, NOAA reported.

The U.S. continued to suffer from one of its worst droughts on record, with the majority of the contiguous U.S. seeing some form of drought conditions during the month. In addition, eastern Europe, inclduing Bulgaria, Hungary, Poland, and Romania suffered from drought conditions. In India, unusually dry weather was ameliorated when the Asian monsoon finally provided generous rains, albeit much later than average.

September also brought the lowest Arctic sea ice extent on record. Studies have shown that manmade global warming is the cause of the majority of sea ice loss that has occurred since the beginning of the satellite record in 1979. More than 4.57 million square miles of ice melted in 2012, NOAA said, which is the size of the entire U.S. and Mexico combined. The six lowest sea ice extents have all occurred in the past six years, a sign of the rapid disappearance of summer sea ice in the Far North, a development that may have far-reaching implications for weather patterns in the northern hemisphere in particular.

At the same time, in Antarctica, winter sea ice extent edged past 2006 to reach its all-time highest extent on record, although climate scientists said that this too is paradoxically connected to global warming.