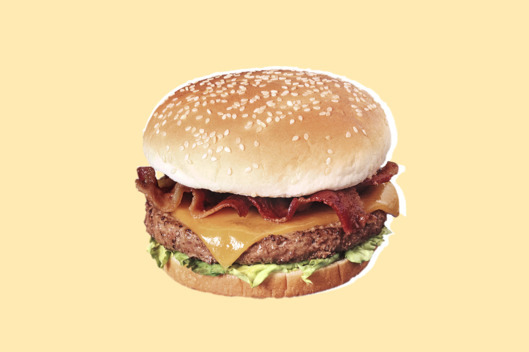 You might remember this ad from the city's Bloomberg era: An overweight man sits on a stool as he faces the camera; his right leg appears to be amputated below the knee. It was a jarring PSA from New York City's Department of Health and Mental Hygiene, popping up in subway cars in 2012 to urge New Yorkers to cut back on oversize sugary beverages. As Thomas Farley, then the city's health commissioner, said at the time, the intent was to warn "people about the risks of super-size portions so that they can make more informed choices about what they eat."

Related: How Unhealthy Food Pulls You Toward It

There were many problems with this ad. For one, no one is particularly interested in being informed about the possibility of a legless future while riding the subway home. For another: The man in the photograph did not, in fact, have an amputated leg, and the image had been altered to appear more dramatic. Yet had the message been less aesthetically aggressive, it would have likely backfired anyway. New evidence suggests that people who are trying to diet end up eating more unhealthy snacks after seeing negative "food police"-style messages like this one, reports a team of researchers at Arizona State University.

The study -- conducted by researchers Nguyen Pham, Dr. Naomi Mandel, and Dr. Andrea Morales -- involved three rounds of testing, and each round revealed a similar conclusion. "We found that dieters increase their interest in and consume more unhealthy foods after seeing one-sided negative messages about healthy foods," Pham, the study's lead author, told Science of Us. This happens, she and her co-authors argue, because these messages make people "feel like their freedom to control their food choices is threatened." Their findings were published in the Journal of the Association for Consumer Research. 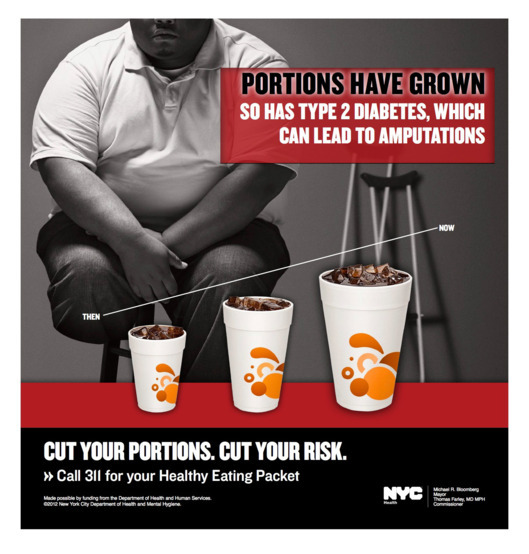 An ad from the city's Department of Public Health 2012 campaign.

Related: Your Personality Could Be Making You Fat

But few foods are always bad or always good; it's fine to indulge in dessert sometimes, of course. So the researchers were curious: Would a more balanced message reduce that backfire effect of the negative messages? To test this, they rounded up 324 participants and presented some with a two-sided message: "All dessert tastes good, but is bad for your health." Those who read that note -- who were also on a diet -- consumed 47 percent fewer unhealthy snacks than those who got a strictly negative message about dessert. In addition, the dieters who got that dessert-bad message ended up consuming 30 percent more unhealthy snacks compared to those who saw a strictly positive message: "All dessert is good."

While the study's food messages might seem oversimplified when compared to real-life nutritional information, versions of these negative food sentiments are all around us, from recent dietary guidelines urging Americans to "limit calories from added sugars and saturated fats" to the one-legged man from the old Health Department ads. And yet many of us aren't listening. "Evidence suggests that most Americans simply don't follow government eating guidelines, regardless of their accuracy," Pham says. "Our paper provides one explanation for why this phenomenon might be happening: People value their freedom of choice, and they resent government intervention that restricts that freedom."

Granted, it's hard to argue entirely against nutritional information that tells us to eat less of the "bad stuff." Especially when we really do eat a lot of sugar. According to current estimates from the Department of Health and Mental Hygiene, 13 percent of the average American's calorie intake comes from added sugars; for children, it's as high as 17 percent. And soda, ever the obvious culprit, isn't the only problem: Added sugars lurk in everything from low-fat salad dressings to barbecue sauce and whole-grain crackers, making them almost impossible to avoid. Of course we're going to end up eating too much of something when it's all around us.

But consider the discourse around nutrition in other countries. Korea's dietary guidelines advise people to "balance what you eat with your activity; enjoy every meal, and do not skip breakfast." Japan says to "[e]njoy snacks, confection, and beverages moderately." Here's Germany: "Allow plenty of time for eating and enjoy mealtimes." And, finally, Canada: "Use terms such as 'less healthy choices' to talk about foods high in fat, sugar or salt. The 'Less healthy choices' should be limited but can be enjoyed at times."

You'll notice a theme: the word enjoy. There is rarely any mention of enjoyment in American nutritional cues. Instead, the dialogue focuses on liberal usage of words like limit and less. The constant instruction to stop eating bad foods in order to be healthy is not only stressful, but it also doesn't work. As nutritional guidelines have doubled down on instructing us about what not to eat, we have also doubled down on our obesity rates.

The idea that we often do the exact opposite of what we are told to do is not new. Yet as Pham's study links the possible dangers of negative one-sided food messages to increased rates of consumption, we should take note, especially if it means that admitting doughnuts taste amazing could save us a couple of pants sizes. Or a leg.

Why Feeling Ambivalent About Your Co-workers Is a Good Thing How Many Steps a Day Should You Really Walk? The Story Behind David Bowie's Unusual Eyes What It's Like to Be a Stoner Who's Allergic to Marijuana 3 Reasons Why You Are Always Mishearing Song Lyrics