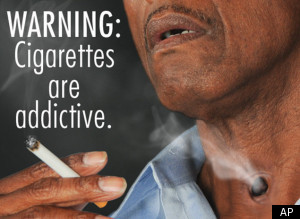 The larger, more graphic warnings that were announced today for cigarette packages can help raise the health literacy of smokers. And learning more about the specific health consequences of smoking influences many smokers to consider quitting.

Smokers generally know that smoking is bad for their health and is addictive, but they often have large gaps in their knowledge of the specific health risks that they are taking. They may also be confused about what "addicted" means, because most smokers are able to quit on their own without much assistance.

The original warning label that "Smoking Is Addictive," added in 1997, addressed a longstanding oversight: it was clearly not enough to tell people that smoking harms and kills you, as the Surgeon General's warning had done since 1964. It was important to add that it has a life of its own, where you lose control of your smoking behavior.

The graphic shown above is accompanied by the following text: "Tobacco use can rapidly lead to the development of nicotine addiction, which in turn increases the frequency of tobacco use and prevents people from quitting. Research suggests that nicotine is as addictive as heroin, cocaine, or alcohol."

Keeping company with cocaine abuse, heroin addiction and alcoholism sounds serious, and it is. Nevertheless, this explanation does not zero in on one of the common characteristics of these addictions, as defined by the psychiatric manual, called the DSM-IV: "there is a persistent desire or unsuccessful efforts to cut down or control substance use."

Many smokers don't like the loss of control involved in smoking. In contrast to permanently quitting, many smokers try to control their smoking by cutting down or just smoking occasionally. These attempts to control their addiction, however, have unintended consequences of their own.

When you try to control smoking through willpower, you can end up just training yourself to wait for the next cigarette. Each cigarette then becomes more valuable, like waiting to open a present on Christmas morning. Exerting control, then, becomes a goal in itself. It also becomes the opposite of quitting, which involves accepting that you need to stop smoking altogether to let your mind and body heal from the addiction. For many smokers, the realization of their loss of control over smoking ultimately becomes a potent motivator to stop completely.

The clinical problem of addiction involves trying to control what is by definition uncontrollable -- except, that is, by stopping the behavior altogether. No less an authority than Keith Richards of the Rolling Stones, in his autobiography "Life," put it like this:

I was bigheaded in that I thought I could control heroin. I thought I could take it or leave it. But it is far more seductive than you think, because you can take it or leave it for a while, but every time you try and leave it, it gets a little harder ... The taking of it is easy, the leaving of it hard ... You've got to think about that and say, hey, there's one simple way of never being in that position. Don't take it.

What we believe about smoking and addiction matters, so let's hope that the new labels will prompt smokers to test their beliefs. Some recreational smokers can "take it or leave it" without stress or strain. Addicted smokers, conversely, are unlikely to ever become recreational smokers, as much as they wish they could. The wish to "just have one," to prove that you are stronger than your addiction, is a wish that, for most addicts who successfully quit their drug, must remain unfulfilled.

Dr. Seidman is author of "Smoke-Free in 30 Days: The Pain-Free, Permanent Way to Quit," with a foreward by Dr. Mehmet Oz. An audio book is available from Random House. Dr. Seidman first introduced his own program to stop smoking as a featured expert on "The Oprah Winfrey Show" with Dr. Oz early in 2008, after 20 years of helping smokers at Columbia University. For more details about the book, go to www.danielfseidman.com.