Of Cash, Coupons and Groupons.
The cash we hold in our wallet is just paper -- but it is backed by the full faith and credit of the U.S. Government. Absent an impressive amount of folly in Washington it never will become worthless.

The gift cards and vouchers we buy around town and on the Internet, however, are much different. Mainly they are backed by the partial faith and imperfect credit of private companies whose foundation is sometimes shakier than consumers imagine.

Groupon, the market leader in daily deal voucher sales, is a case in point.

We may not realize it, but just like any loan, the money we load on a gift card or voucher is actually at risk. We're betting that when it comes time to spend the card, the merchant will still be around, and able to repay what they owe. With gift cards from profitable corporate giants like BestBuy, WalMart, or Starbucks, that's a pretty safe bet.

Groupon vouchers are very different from the gift cards sold by giant retailers. Consumers make their initial purchase on Groupon's polished website, but to redeem their vouchers, they deal directly with Groupon's network of small, often struggling merchant partners.

Not every voucher is redeemed right away. In just the few years since Groupon's birth, the value of unused vouchers has apparently swelled to as much as $725 million. If the merchant responsible for a voucher goes under, Groupon promises to refund the consumer; but Groupon itself has financial difficulties, and so that back-stop holds questionable value.

In short, the company's balance sheet has the elements of a ticking time bomb which could explode at any moment -- leaving consumers and investors with little or nothing to show for their spending and investing.

The story of this precarious state of affairs begins in April 2012, when Groupon settled a class-action lawsuit over its voucher expiration dates. Most Groupon vouchers previously had expired within 12-18 months after purchase. Dissatisfied consumers sued the company, claiming that the lifespan of vouchers should be not less than the lifespan of gift cards -- under Federal law, not less than 5 years.

No Need to Act Now, This Offer Will Never Expire.
In an effort to combat adverse publicity, Groupon promised to go further than the law required. Groupon declared that all groupons would never expire and continue always to be honored by the merchant. And it made this a retroactive promise: All unused vouchers the company has ever issued are to remain valid forever. Groupon further promised consumers that their original outlay for the cost of a Groupon voucher would be refunded by Groupon if a merchant partner failed. 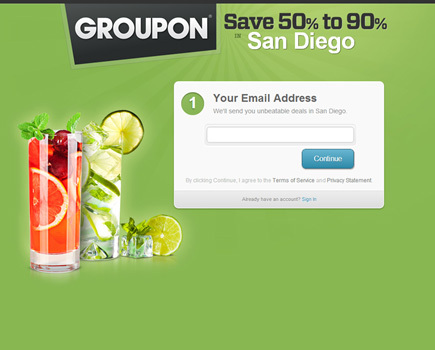 These messages helped rebuild confidence in Groupon vouchers, but they were misapplied by consumers in ways that Groupon should have anticipated. Groupon effectively encouraged millions of consumers to delay their redemptions -- and many of those who delayed have since ended up holding vouchers for goods and services that no longer exist.

While there is some financial satisfaction for consumers who do keep Groupon to its promise to reimburse the consumer's original outlay when a business has failed, this does not provide the economic or intangible benefit that the consumer was expecting. Consumers inevitably are inconvenienced and lose the time-value of the money they have spent. And so, even while Groupon is around to provide reimbursements, consumer expectations are continually being disappointed.

Merchant Failure Rates.
This situation would be difficult for consumers even if Groupon's partners only failed at business at a normal rate: The Small Business Administration reports that 10 percent of small business fail each year, and that in excess of 2,500,000 small businesses disappeared between 2007 and 2010 alone. But the Groupon failure rate is almost certainly much higher than normal, because -- as we discuss further below -- Groupon attracts many partners who are already in trouble and then, often, exacerbates their woe.

Groupon broke through during the 2008 financial crisis, just as banks were cutting off credit to small businesses at an alarming rate. Merchants were desperate for cash to pay their bills, and Groupon seems to have reached for many partners who had difficulty affording available credit and were looking for a quick infusion of cash. Groupon's bargain with these marginal operators has been a very hard one -- it keeps for itself a large percentage of revenue that it takes in from vouchers, and it insists that its merchant partners offer a discount of at least 50 percent off to voucher holders.

For merchants, taking up with Groupon can thus be a fatal attraction.

While Groupon touts itself as "the most effective local advertising [tool] available," it tends to be expensive, risky, and ineffective. Expensive, because merchants must offer discounts of 50 percent or more, and then split that reduced revenue 50/50 with Groupon. Risky, because the ultimate cost of providing those discounts can rise out of control if too many vouchers are sold. Ineffective, because Groupon usually connects merchants with coupon hunters, and not, generally speaking, with people who will become loyal repeat customers.

Disguised Lending by Consumers.
Consumers don't, by and large, realize that they are actually making a type of loan to the voucher merchants: that is, by exchanging cash now for vouchers to be redeemed in the future, which cash the merchants are using to pay their suppliers and employees, they are essentially purchase money lenders.

It is true that in many cases, consumers profit when they redeem the vouchers for a 'good deal.' Still, if they get to the merchant's door too late, the consumer must seek a reimbursement from Groupon -- in which case the consumer from the vantage point of hindsight has made an interest-free loan to a borrower who nevertheless paid an approximation of interest and brokerage fees -- but to Groupon.

For merchants, the loans are expensive. A consumer might pay $50 for a voucher said to be worth $100, but the merchant might only get $25 after Groupon's cut. Unless the merchant has extraordinarily high profit margins, this works out to a very high borrowing cost. Creditworthy businesses today often can borrow on better terms, leaving Groupon to feed on the businesses that are not healthy enough to look elsewhere.

Merchants basically get it -- to many of them, Groupon looks less like an innovative advertising mechanism than a loan broker, arranging bundles of small loans from consumers, and taking a substantial cut before the money reaches the merchant.

Consumers, as indicated, don't often see this side of the equation; they think about buying a Groupon voucher as an exercise in frugal shopping.

Tragic Ending?
Groupon seems likely to attract increasingly marginal merchants. And when they go under, responsibility for outstanding vouchers will fall squarely on Groupon. The Groupon Promise states: "We will always honor your refund requests if a business closes permanently."

Just how large a sum is Groupon promising to cover? Since its IPO, Groupon has sold over $7.25 billion dollars of vouchers in North America alone. Even presuming that 90 percent of these are redeemed conventionally -- a very high rate in the gift card business -- consumers are holding at least $725 million in unused vouchers. Groupon could end up on the hook for much of this staggering figure.

Groupon's 2012 results show that the company again sold extraordinary numbers of vouchers to consumers, beating revenue estimates by nearly $44 million. At the same time, it again failed to turn a profit, posting an $95 million loss for the year.

These continued losses, combined with other balance sheet difficulties, leave it in no position to back up the hundreds of millions of dollars of refunds it continues to promise consumers. Investors in Groupon's Initial Public Offering have already sued, alleging that Groupon improperly understated this risk on its financial disclosures. In response, Groupon increased the amount of its refund reserves, but the increase seems inadequate given Groupon's rapidly growing revenue.

What is to be Done?
Enforcing Groupon's refund guarantee on a large scale could be very difficult. Class action suits would face many obstacles, not least because Groupon leaves it to each individual merchant to track voucher redemptions, making it difficult to identify which consumers are entitled to refunds.

State attorneys general could try to prosecute Groupon under their existing consumer protection statutes, but they would face a high bar to prove that Groupon's practices were deceptive rather than just shortsighted. And if these enforcement techniques are successful they might bankrupt the company.

Given the huge size of the overall risk and its disguised nature, consumers deserve to be protected from the risks created by Groupon and Groupon-like schemes of the future. Because consumers are being drawn into disguised forms of lending, the new Consumer Financial Protection Bureau ought to assert better regulatory control over voucher sales, and issue regulations requiring adequate refund reserves.

Update (5:23EST 3/7/2014): Groupon has been in touch since this blog post appeared. In its response it does not critique our assertion that consumers can wind up in a position analogous to lenders when they buy a voucher; nor, while saying that our conclusions are "wrong" and in "error," does the Groupon response deny the specific financial facts we present.

It refuses to comment on the value of its unredeemed vouchers or to disclose what percent of vouchers are actually redeemed. Instead it highlights much of the positive news contained in its latest financial report, to which we linked in our story. It observes that it has $1.2 billion in cash, but does not choose to remind us that it also has $1.187 billion in current liabilities; and that it reported losses for the quarter and the year; and that its substantial revenue increases necessarily entail increases in potential refund liabilities.

We are heartened to learn that redemptions have increased relatively, but we are unable to learn what the absolute rates and amounts are. We are told that payments to merchants are staggered to help protect merchants, but not that that is the approach merchants would prefer, or how merchants are better off.

We are told that merchants can set up some aspects of their own deals to suit themselves, but we are not told that Groupon never insists on minimum discounts; or that merchants can ever terminate their responsibility to honor a voucher. See F in merchant terms and conditions. It is our understanding that a key GROUPON merchandising advantage comes from its branding which seeks to attract consumers with offers such as "Subscribe Now to Save 50-90% in Your Neighborhood!".

We take no issue with Groupon's assertion that it has worked with many national brands or that Groupon is more popular than ever with consumers and merchants--if by "popular with merchants" is meant helpful in allowing merchants to receive cash infusions.

We also appreciate that Groupon makes efforts to encourage immediate redemptions--this is consistent with our thesis that unredeemed vouchers endanger Groupon's long-term health. We stated that Groupon's messages "were misapplied by consumers." We had no intention to imply that Groupon intentionally incentivized delays.

Whether we are "just plain wrong" about the sustainability of Groupon's business model and its future, as Groupon asserts, remains to be seen.

Teaches Law at Hofstra and Yale