When I started my 25th book Assault With a Deadly Lie 4-5 years ago it was because of stories I read online that weren't getting national attention but were very alarming just the same. They were stories of SWAT teams raiding the wrong houses and doing massive property damage, terrifying people, sometimes injuring or even killing them. They were stories of unarmed, frequently mentally disturbed people being shot by police.

As a mystery author and the son of Holocaust survivors, this horrified me and made me do research. I discovered that both the ACLU and the Heritage Foundation were equally alarmed by the post-9/11 radical militarization of our police forces nationwide. They weren't just being given the weapons of an army by the Pentagon, they were being trained like armies, trained to think of citizens as the enemy. Which made them overreact. 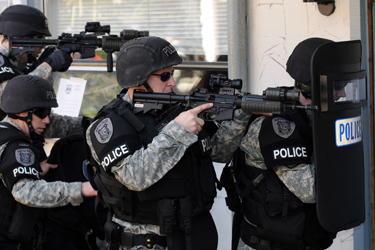 I'm a writer, and my response to these outrages was to make the issue visible for my audience by having the ugly tsunami hit the two comfortable middle-class professors in my mystery series. What it would be like if this violence targeted people who had never been in any kind of legal trouble before, and believed themselves safe, believed that kind of encounter could only happen to somebody else?

Assault With a Deadly Lie was published just around the time of Ferguson and suddenly the story of what had gone terribly wrong in America was in the news 24/7. Then came Eric Garner's terrible choking death.

Congress rumbled into action. Or at least talk. They'd been oblivious for years. Op-ed pieces were written by the score. People marched and protested across the country. Reporters started writing about cities like Albuquerque with high rates of cop shootings of civilians.

That's all great, but nothing's changed at the local level. Look at this past week's story from Pasco, Washington. A troubled man was gunned down for throwing rocks at police. Rocks. When will it end?