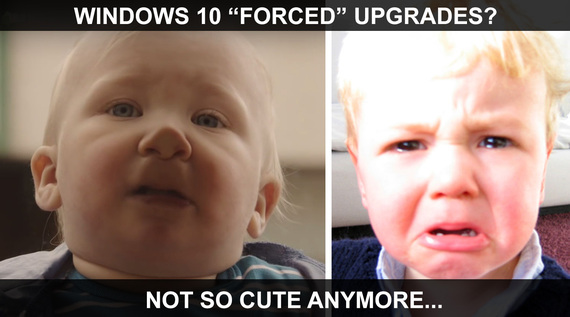 I wouldn't have believed that Microsoft would actually force people to upgrade to Windows 10, except it happened to me this weekend on Saturday afternoon. We've been getting the annoying pop-up notice on our Windows 7 laptop asking us if we wanted to upgrade to Window 10 for the past year. We always have said NO. But on Saturday, my daughter turned on the laptop to do some schoolwork, and then called to me in the kitchen, "Hey Dad, the laptop just shutdown and says it's installing Windows 10. I swear I didn't do anything. It just happened."

I walked over and looked at our laptop, and sure enough, the screen said it was downloading and installing Windows 10 and DO NOT POWER OFF THE COMPUTER. I didn't want to damage the computer, so I wasn't willing to kill the power. Instead we watched helplessly for about the next 2 hours as our laptop was taken over and Windows 10 was slowly installed. During this time, I went online on our other (Windows 7) computer and did a quick google search for "Windows 10 forced update". I learned that many people are reporting the same thing (for example, here and here). It appears that as a courtesy Microsoft is scheduling your computer to automatically update to Windows 10 at a specific time without your knowledge or permission. Unless you find out in advance and disable it, at some random time, out of the blue Microsoft may take control of your computer and automatically start the Windows 10 "upgrade". It may be in the middle of the night, or during the day in the middle of a critical project you're working on.

WHAT YOU CAN DO IF THIS HAPPENS TO YOU.
I need my laptop and computer to stay on Windows 7 to run old programs and external hardware I have for work. I do NOT want either of our computers "upgraded" to Windows 10. While our laptop was "upgrading" I searched online and found a tip that after Windows 10 was finally installed, it would ask me to accept the Windows 10 Terms and Conditions, and I could at that point decline the update. Sure enough, about two hours later, the "upgrade" finally finished and our laptop started up under Windows 10. The screen provided a lot of legalese (Microsoft Windows 10 terms and conditions), and then asked me to click ACCEPT or DECLINE. I clicked DECLINE. It then asked me if I was sure I wanted to decline the amazing Windows 10 experience. I said yes. It told me it would attempt to revert back to Windows 7. It took an hour, much of which time the screen was blank and I was pulling out the little hair I have left, but eventually our laptop was back to Windows 7. So if this forced upgrade happens to you, you should be given the opportunity to decline the terms and conditions, and your computer should be able to revert back to Windows 7.

HOW YOU CAN STOP THIS FROM HAPPENING TO YOU.
After this happened, I found two programs that say they can disable the automatic Windows 10 upgrade on your computer. The first program is Never 10. I used it. You don't actually install the program, it just resets your computer setting to disable the Windows 10 update. But then I decided I wanted more protection, and I also wanted to delete the already downloaded Windows 10 upgrade files on our laptop. I had been warned the computer would just keep trying to install the now downloaded Windows 10 update. So I found and downloaded GWX Control Panel (both programs mentioned here are free). It's kind of crazy to think I need to install a third party program to keep Microsoft from taking over my computer and forcing an unwanted, unauthorized update on me. Crazy.

WHY IS MICROSOFT DOING THIS?
I'm not sure, but I'm guessing it is all about the money. Microsoft may be giving away "free" upgrades to Windows 10, but they clearly plan to monetize Windows 10 after they get it installed on your computer. It could be through personal data collection, additional targeted advertising, pushing "premium" subscriptions, or a variety of other means. The more machines they convert to Windows 10, the more money they can make down the road. But what surprises me is how they are doing this. It's one thing if people freely decide to upgrade from Windows 7 to Windows 10. It's an entirely different thing if they are tricked and forced into upgrading. Why would Microsoft risk the negative publicity and backlash from doing this? It's frankly shocking, and as I wrote above, I wouldn't believe they are actually doing this, except that it happened to us, and that's why I wanted to warn you. I use my Windows 7 computer to make a living doing design work. I often have tight deadlines. I can't imagine having my computer taken over for three hours in the middle of the day when I'm working on a project that has to be finished that day. What kind of corporation would take over someone's computer? In addition, anytime you upgrade an operating system, you risk turning the computer you use to make a living into a big useless paperweight. Why would a corporation force this risk on me without my permission? From the articles and comments I found online, I am not the only angry, upset person.

I rely on our two computer for work and my kids need them for school. Windows 7 works just fine. I don't know if Windows 10 would work with my old programs or hardware, nor do I want or need to risk finding out. I do not want to upgrade to Windows 10. Ironically, about a year ago, I wrote a blog post about what I thought was the best TV commercial in 2015, which was the Introducing Microsoft Windows 10 TV commercial because it had the absolutely cutest little adorable kids (one of them is in the picture above on the left). Up until yesterday, I was a fan of Microsoft. My first computer was a Mac, but after that I've always used Microsoft. I tend to stick with the operating system that works, and kept 95, and then XP for a long time. I'm fine with Windows 7. I'll upgrade when I'm ready, and when I need to. I don't want to be forced to upgrade.

I still can't believe Microsoft actually did this. The next time I buy a new computer, I'm not sure what I'll get...