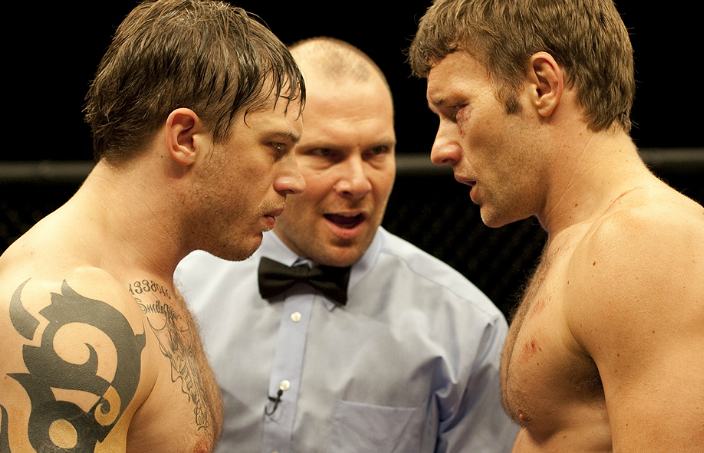 Warrior, the new film from Gavin O'Connor, couldn't be more fitting for the times we live in.

It asks, how do you forgive when you really have been wronged? How do you proceed when no one believes in you? How do you truly claim what's yours when taking it might mean "killing" your brother? How do you go against group values and figure out what's best for yourself? How do you know if what you're doing is right? How do you have courage? How do you heal? How do you love?

Warrior gives a kind of dignity to the struggle embedded in these questions, perhaps because the characters are literally taking a beating and throwing punches in an effort to find the answers.

It's sort of Mixed Martial Arts (MMA) meets Cain and Abel, as critics have noted. The film's an abstract take on the myth, in the sense that as children, the brothers were rivals for their dad's love -- except father was a drunk and the "murder" was that of the mother, a battered wife who died of an illness. As the story goes, the grown sons of this alcoholic father find themselves at a crossroads. The eldest, Brendan Conlon (played by Joel Edgerton) is a teacher and he's wisely limited his relationship with dad to phone calls and letters. [Random aside: Edgerton's uncanny resemblance to Conan O'Brien makes me want to see O'Brien do some kind of comedic take on this film, I can just see O'Brien in the cage now... More on this here.] Anyway, Brendan is in dire need of money to keep his wife and children from losing their home, while the brother, Tommy Conlon (Tom Hardy) is an AWOL Iraq War vet, who feels responsible for the financially struggling wife and children of his fallen comrade.

What follows is the familiar trajectory for sports or martial arts genre movies: There's the problem (as stated above); there's the acquiring of teachers; there's the training; there are all obstacles to getting in shape; there's the fighting. But the central conflict is resolving of broken relationships and healing from past hurts -- growing up with Paddy, their dangerous father (played by Nick Nolte) who beat their mother and now appears to be maddeningly -- at least to Tommy and Brendan -- sober and "evolved"; to festering sibling rivalries (Paddy favored Tommy); to feeling betrayed (Brendan bailed on the plan to leave town with Tommy and their mom, leaving underage Tommy to care for their dying mother). We all know where this is headed -- a climactic battle where Tommy and Brendan will enter the same fight contest and, if they both make it/survive to the final round, will have to defeat the other.

In the hands of a less skilled director Warrior would be a totally sappy melodrama, but the film works in part because of its expert cast and the fact the director shows so much restraint. Music is limited, and O'Connor doesn't overplay already potent scenes. For example, when Tommy throws a cup of quarters at Paddy, taunting him to drink again; the camera lingers for just a moment to note possible regret on Tommy's face, and then it registers Tommy's real anguish when he opens the door the next day to see Paddy drunk -- his first relapse in over 1,000 days. Tommy, in an astonishing display of tenderness and understanding (of the impact of his actions and of his father's pain) takes the whiskey out of Paddy's hands and cradles him like a child (or a fallen soldier) hoisting dad on his belly, as he strokes his forehead. It's in a superhuman display of kindness and yes -- forgiveness.

Warrior, I think, seems to be saying that there is hope for healing and reconciliation. And it's not some easy thing. It's a real struggle, where you're either gonna have to come into your own; or come down a notch and give a little; depending on who you are. It says that when you are a survivor of some kind of impactful experience -- something happens. A cup of poison will either kill you or give you some kind of remarkable gift; from Kanye West to Nietzsche, we all know this. The part I think that is not often said, in addition to accepting how hard this is, is that you'll never know how amazing you are, until you accept that all of your experiences are earned wisdom. There's a reason Tommy can rip the back off a tank to save men who are drowning, that he can walk away from a war -- it's because he's known fear and he's overcome it. There's a reason Brendan can fight to save his family; that he can forgive he father, that he can choose to save himself -- it's because he's learned that happiness is his birthright. And so this film underlines how the sons of cruel men can love again even though their hearts have been betrayed. And cruel men can change; they can grow humble and lose their powers.

Ten years ago this week, I was logging footage in a dark video closet at ABC television in Manhattan. I was hung over (hey, I was kid out of college) having just come home a few hours earlier from celebrating a friend's birthday. I was only on the extreme periphery of what happened that day, and yet even I knew I was impacted by 9/11. Over and over again, my colleagues and I watched everything that was happening -- for weeks, then months and eventually it was like anything on or around that week had a negative valence, a kind of sadness hung over it. Of course, my experience pales in comparison to those who lost loved ones.

For me, it was a kind of loss of innocence. Year upon year, without my quite realizing it, I began to dread that week, which of course also included my friend's birthday. She never complained. She implicitly understood the landscape of fear. I knew it was wrong, the way the fear seemed to infect everything -- even the good things.

I didn't know what to do with this amorphous fear, so I got political. I was opposed to going to war because I knew, knew, it would just perpetuate the violence and create more suffering in the hearts, minds and bodies of the men and women who would go overseas -- and what they would do to the people and environment over there. So I marched against the war to "payback" for 9/11. I worked for Air America, a media effort that positioned itself against war. I started blogging here. And then after ten years, I finally left New York City, it seemed time to move on.

This summer my friend called and said she was coming to visit. After some half-hearted excuses to delay seeing her, I realized I was wrong and met up with her on her birthday. I'm walking up to the table in the cafe where we're meeting and she looks the same as she did 10 years ago, and as she turns, I see she has a few grey hairs like me now. And she smiles. And in my heart I am saying, I'm sorry I was afraid. But she's laughing and telling me everything is ok, I'm glad you're here! I can feel the weight lifting. Seeing her happy is good, like old times but better -- she's brought a cute guy along and so love is in the air. Our laughter is rolling out in every direction. Everything is alright.

WARRIOR is now in theaters.