Just one month after city residents cheered San Francisco Mayor Ed Lee as he stood with the owners of the Golden State Warriors on the edge of the Bay and announced the construction of a massive new basketball arena, neighborhood opposition to what Bleacher Report called, "one of the sexiest arenas in sports" has begun to take shape.

While the planning of the proposed facility is still in its infancy, some of the preliminary details indicate that a Warriors arena could have a larger impact on the neighborhood than the San Francisco Giants' nearby home of AT&T Park.

"We have serious concerns about changing from a mixed-use district with primarily residential neighborhoods and a major stadium to one that has a major stadium AND a major arena along the Embarcadero," wrote the South Beach-Rincon-Mission Bay Neighborhood Association in a statement. "We are able to handle the pressures of the major ballpark, but we are having trouble visualizing how the neighborhood can absorb the year-round impacts of two major sports complexes without overloading the infrastructure and becoming no longer family-friendly."

The average NBA season hosts approximately 40 home games; significantly less than the 80-something regular season games played by the Giants. But the new arena will likely hold far more non-sporting events, such as large-scale rock concerts, than does AT&T Park.

"The prospect of going from about 80 such days each year to potentially more than 300 days each year between King Street and Piers 30-32," wrote the 175-member neighborhood association in the statement, "makes it exceedingly difficult for the neighborhood to absorb without major investments by the city and the developers to prevent almost continuous gridlock on the Embarcadero Muni lines and to ensure traffic and crime control."

Unlike the Warriors' current home of Oakland's Oracle Arena, this new location isn't going to be nearly as reliant on private automobiles as the primary means for spectators to get to and from the games. As a result, nearby public transportation services will need to be beefed. The new E-Embarcadero Muni line scheduled to begin service in the area in preparation for the 2012-13 America's Cup is a start, but further improvements may be needed to handle all the excess traffic.

"People are very upset right now," neighborhood association president Katy Liddell told KTVU. She noted that locals weren't consulted before the city launched its a full-scale push for the arena. "We want the Warriors in San Francisco. We welcome them with open arms, but we really have grave concerns about putting an arena on...[Piers 30-32]."

City officials and Warriors management have already begun reaching out to neighborhood residents in an effort to come to an agreement about how to best integrate the new development into the fabric of the city.

Last week, San Francisco Supervisor Jane Kim held a community meeting with Warriors President Rick Welts along with representatives from the Mayor's Office, the Port of San Francisco and the San Francisco Municipal Transportation Agency. Community members raised a whole host of sticky issues during the forum, from increased traffic congestion and fan behavior on surrounding streets to air pollution and prioritizing the inclusion of small businesses into the site.

Getting the Warriors into a new home across the Bay has been a top priority for the city's leadership since virtually the moment they realized it was a possibility.

The usually fractious Board of Supervisors not only all signed a letter urging the Warriors to consider a move to San Francisco but also unanimously voted to give the team exclusive rights to build on the site. Mayor Lee told the San Francisco Chronicle in an interview last month that he wants the Warriors deal to be his "legacy" as the city's chief executive.

If everything goes according to schedule, an environmental impact report, which could take between twelve and 18 months to complete, will start in September. Construction will commence in 2015 and the team hopes to be playing home games in its new stadium by 2017.

Check out this slideshow of design specs for the new area: 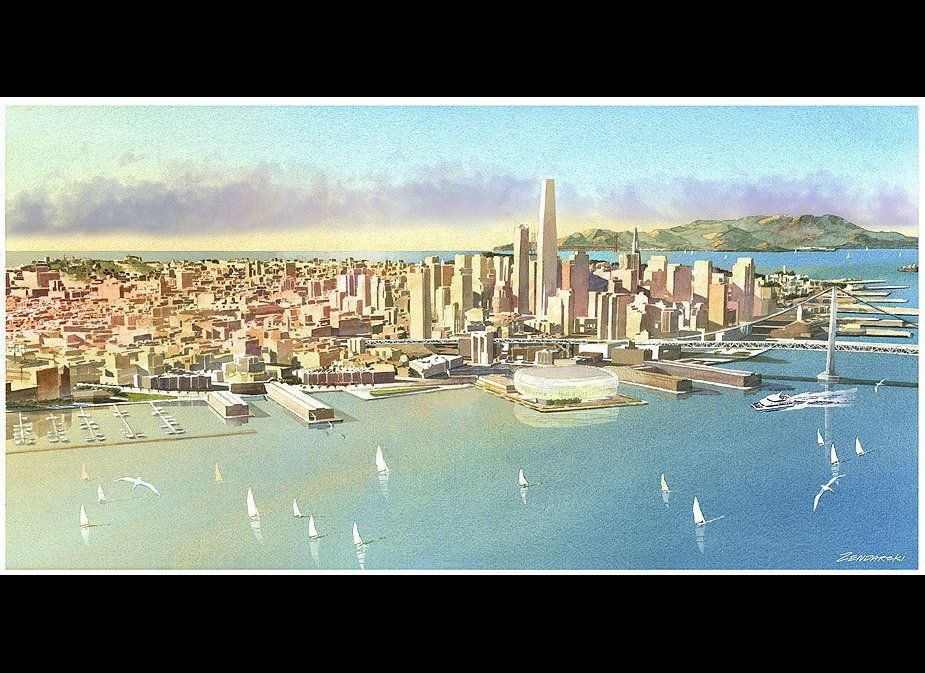