One of the main concepts of Gene Roddenberry's Star Trek was that in the future, all the silly prejudices of the modern era were gone. In the original series that came out in the 1960s, right smack in the middle of the Cold War, Roddenberry had a Russian serving on the Enterprise's bridge. During the midst of the Civil Rights Movement, Roddenberry had one of the first interracial kisses on prime time television (albeit a forced kiss, but still, baby steps). By the time that the 1980s rolled around, Roddenberry used the first season of Star Trek: The Next Generation as commentary on all sorts of 1980s issues. 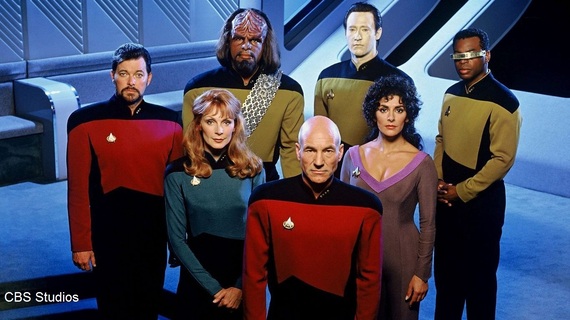 In fact, in the show "bible" (a document written by Roddenberry that would serve as an overall manual for how the show should be written), Roddenberry notes:

We now have more freedom and story latitude, because our series by-passes the networks and is made directly for television stations. As before, without neglecting entertainment values, we invite writers to consider premises involving the challenges facing humanity today (the 1980s and 90s), particularly those which interest the writer personally. The new Star Trek episodes will continue the tradition of vivid imagination, intelligence and a sense of fun, while still assessing where we humans presently are, where we're going, and what our existence is really about.

As it turned out, however, the one area where the challenges facing humanity today could not be adapted into a Star Trek: The Next Generation episode is when the topic was homosexuality, even if the writer was a Star Trek legend.

David Gerrold began writing for the original Star Trek series while still in his early 20s. His most notable achievement on the original series was writing the classic episode, "Trouble With Tribbles." 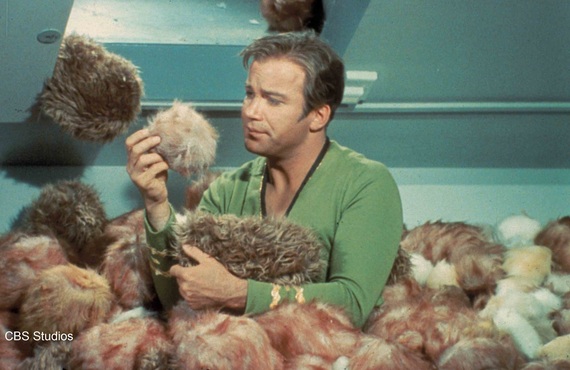 He continued working on Star Trek with the animated series and he was an early hire for The Next Generation (indeed, many of Gerrold's thoughts on what the new series should be like were incorporated into Roddenberry's show bible, including the idea of having a Klingon be a crew member and that the Captain would rarely go on on away missions, something that always irritated Gerrold about the original series).

Gerrold and Roddenberry made an appearance at a science fiction convention right around the time that the new series had been announced and while there, Roddenberry made a statement that Gerrold took to heart. Gerrold recalled in an interview with startrek.com:

One fan asked, "Well, are you going to have gay crewmembers, because in the 60's you had Black and Asian and Latino, etc.?" Gene said, "You know, you're right. It's time. We should." I was sitting on the side, taking notes, of course. So there it was: Gene had said it in front of an audience of 3,000 people in November of 1986. I was a little bit surprised and delighted that Gene was willing to go there. We got back to L.A. and Gene said it again in a meeting, and somebody in that meeting -- I won't say who -- said, "What, we're going to have Lt. Tutti-Frutti?" Gene balled him out and said, "No, it's time. And I promised the fans we're going to have gay characters."

So Gerrold wrote an episode titled "Blood and Fire," which was an allegory for the AIDS crisis, as the Enterprise comes across a ship whose crew had been killed by Regulan bloodworms. These bloodworms are lethal creatures and all ships infected with the creatures must be destroyed on sight. In the episode, Gerrold introduced two gay crew members. He recalled:

There were two characters who were not very important to the story, but they were the kind of background characters you need. At one point Riker says to one of them, "How long have you two been together?" That was it. The guy replies, "Since the Academy." That's it. That's all you need to know about their relationship. If you were a kid, you'd think they were just good buddies. If you were an adult, you'd get it. But I turned in the script and that's when the excrement hit the rotating blades of the electric air circulation device.

The major objection was that due to the fact that Star Trek: The Next Generation was syndicated, the show might air in the afternoon in some markets and that this was too controversial of an issue. Considering that this was just five years after a CBS executive explained a casting change on Cagney and Lacey to TV Guide (which I detailed in a TV Legends Revealed a while back) by explaining "We perceived them as dykes," you can only imagine the likely perception of depicting gay characters were by Paramount executives.

Ultimately, the episode never aired. Gerrold left the series after the first season ("Blood and Fire" never airing played a part, but it seemed that there were a host of other issues, including conflicts with Roddenberry and Roddenberry's attorney, Leonard Maizlish and opportunities on a proposed science fiction mini-series for CBS with producer Daron J. Thomas) and while Roddenberry once again promised that there would be gay members on the Enterprise before season five of the series, Roddenberry passed away before he could implement this decision and no gay crew members ever appeared on Star Trek: The Next Generation. Longtime Star Trek Producer Ronald D. Moore commented on the show's handling of gay characters a couple of years ago:

We've just failed at it. It's not been something we've successfully done. At Star Trek we used to have all these stock answers for why we didn't do it. The truth is it was not really a priority for any of us on the staff so it wasn't really something that was strong on anybody's radar. And then I think there's a certain inertia that you're not used to writing those characters into these dramas and then you just don't. And somebody has to decide that it's important before you do it and I think we're still at the place where that's not yet a common -- yeah, we have to include this and this is an important thing to include in the shows. Sci fi for whatever reason is just sort of behind the curve on all this

Star Trek: Deep Space Nine did, at least, have an interesting storyline with Jadzia Dax where she is reunited with the ex-wife of one of the former hosts of her symbiont. They still have a connection and even share a kiss, the first lesbian kiss in Star Trek history.

Also, as a sort of victory, Gerrold later directed his "Blood and Fire" script (with some adaptations by him) for the fan-produced Star Trek site, Star Trek: Phase II in 2008. You can watch the episode here.

Be sure to check out my archive of TV Legends Revealed for more urban legends about the world of films. And click here for legends just about Star Trek!