Neocons favor the chimpanzee -- macho and violent -- as model of our ape ancestor. But "Ardi" seems to have had more in common with the hippie-like bonobo.

The most outrageous claim regarding "Ardi" (the recently discovered 4.4 million year old fossil of a human ancestor) came from a press release by Kent State University with the headline: "Man Did Not Evolve From Apes."

You can imagine how creationists and intelligent-designers jumped on this statement as a gift from God, and how some media outlets got confused, saying that this must mean that apes descend from us. But the claim was quickly retracted. What the scientists meant is that we do not descend from any extant apes. Like us, apes have changed considerably since we parted our evolutionary ways.

Our ancestor surely was an ape, but what this creature looked like is anybody's guess. And here it gets political!

In the 1970s, humans were known as born "killer apes" with an insatiable lust to eliminate their own kind. At about the same time, chimpanzees were found to brutally kill their neighbors and to commit infanticide. The chimpanzee was quickly adopted as our ancestral type, meaning that violence is in our DNA, that humanity will wage war in perpetuity, and that competition and power struggles are our way of life. Anyone who thought differently was considered a romantic dreamer.

Revelations about the bonobo's way of life arrived more than a decade later and threatened this picture. With their "gay" relations, female supremacy, and "make love -- not war" pacifism, bonobos became the idols of the left. They were almost too "politically correct" to be true.

Unfortunately, this primate was barely taken seriously by science despite the fact that it is genetically exactly as close to us as the chimpanzee. The more science learned about bonobos, the more they became a thorn in the side of Hobbesians as well as homophobes. Attempts were made to sideline them by declaring bonobos an offshoot on the evolutionary tree. They were obviously a delightful species, it was said, but we were welcome to ignore them. When it came to human evolution, they were irrelevant.

To show how political this debate has become, consider a 2007 essay in The New Yorker that tried to reduce the bonobo's sexiness while enhancing its aggressiveness by cherry-picking the evidence. This botched piece of journalism was gleefully picked up by neocons (not usually interested in evolution), such as Dinesh D'Souza, who accused liberals of having fashioned the bonobo into their mascot. They urged them to stick with the donkey.

Let me be as explicit as I can be: there exists not a single report anywhere in the literature with a confirmed case of one bonobo killing another, neither in captivity nor in the wild. We have lots of such reports for the chimpanzee, and I myself have witnessed a brutal assault and castration by males against a rival, not unlike the gruesome attacks in recent years by chimps on people. Chimpanzees can be vicious. Obviously, bonobos are not free of aggression, but Japanese primatologist Takeshi Furuichi -- the only scientist to have extensively studied both chimpanzees and bonobos in the jungle -- said it best:

"With bonobos everything is peaceful. When I see bonobos they seem to be enjoying their lives."

So, what does this have to do with Ardi?

Ardi has changed our perspective on the last common ancestor because of her smaller, blunter canine teeth. Canine teeth are very well developed in chimpanzees, who have long, sharp "fangs" that the males use to rip open rivals. Ardi, it is said, must have been more peaceful, perhaps because her species had found a way to reduce male-to-male conflict.

Whereas the chief anthropologist on the Ardi team goes by the bonobo-like name of Owen Lovejoy, he focuses all of this attention on the chimpanzee, as is tradition in his field. Since chimps are violent and Ardi probably wasn't, he argues that we have a totally unique creature on our hands. His pet theory is that this must mean that Ardi and her contemporaries were monogamous, but unless the diggers come up with a male and female fossil holding hands and having wedding rings, the idea that these ancestors avoided conflict through pair-bonding remains pure speculation. There is no evidence for it, and the only pair-bonded primate we have in our direct lineage (the gibbon) has in fact huge canine teeth. 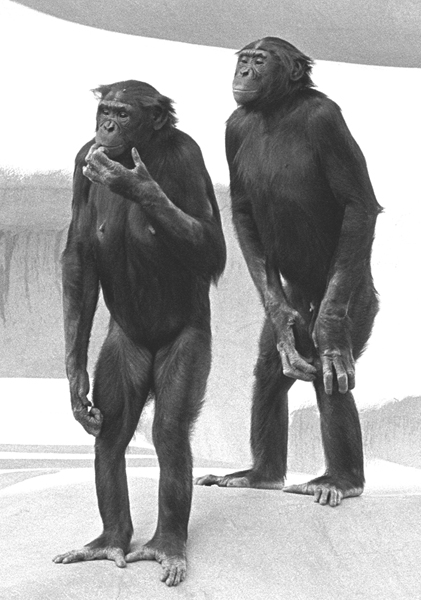 Bonobos stand and walk upright quite easily, here an adult female (left) and an adolescent male. Photo by the author.

It is high time for a new look at the bonobo. This species has relatively small canines, is remarkably peaceful, and highly promiscuous. When bonobos stand upright, they look eerily human-like because their legs are longer than those of any other ape and they seem to more fully stretch their backs. Harold Coolidge, the anatomist who first described this species, in 1933, noted that the bonobo "may approach more closely to the common ancestor" than any living ape.

What if we descend not from a blustering chimp-like ancestor but from a gentle, empathic bonobo-like ape? Or what if we share characteristics with both of these close relatives instead of just the one favored by our personal political ideology? Ardi is telling us something, and there may be little agreement about what she is saying, but I hear a refreshing halt to the drums of war that have accompanied all previous theories.