On the day of the 1956 NBA Draft, Boston Celtics general manager (and coach) Arnold "Red" Auerbach made one of the greatest trades in NBA history. He dealt All-Star Center Ed Macauley and rookie small forward Cliff Hagan to the St. Louis Hawks for the second pick in the draft, University of San Francisco center Bill Russell. Macauley and Hagan were both great players (they are both in the Basketball Hall of Fame), but Bill Russell was one of the greatest players of all time and led the Celtics to a remarkable 11 championships in his 13 seasons in the NBA. 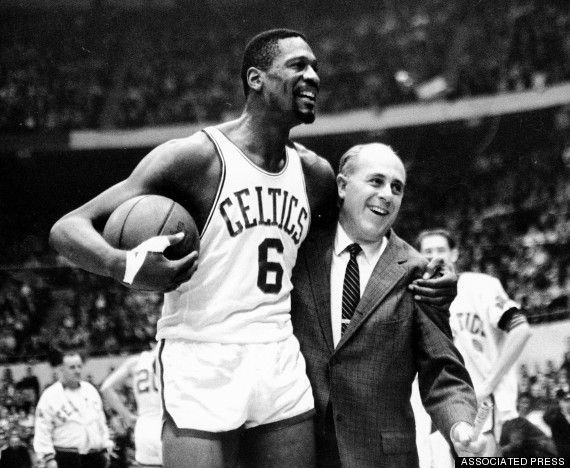 You might have noticed, though, that the trade was for the second pick in the draft. The Rochester Royals had the first pick in the draft. Why didn't they draft Russell? There is a legendary story explaining why they passed on Russell. Here is Auerbach telling the story to John Feinstein in Feinstein's 2004 collection of Auerbach stories, Let Me Tell You a Story: A Lifetime in the Game:

The "Bill Russell was traded for the Ice Capades" story is now part of basketball lore. But is it true?

As to the first point, it seems as though Harrison had a number of reasons not to draft Bill Russell.

First off, there was a big financial gap between owners in the NBA in 1956. There were owners who owned their arenas and were well off financially and there were owners who did not own their arenas and were barely able to keep their teams afloat. Lester Harrison and the Rochester Royals were part of the second group. Harrison did not own his own arena. The city of Rochester did (they had just built a new one in 1955). In an era before television opened up new revenue streams, attendance was how teams made money and Rochester drew poorly (the Royals ultimately moved to Cincinnati in April 1957). It is important, then, to note that Harrison was strapped for cash going into the 1956 NBA Draft.

Money was a major factor with regards to the drafting of Bill Russell. Abe Saperstein's Harlem Globetrotters were very interested in signing Russell and the popular barnstorming team had a lot more money to spend on the top African-American players in the game. The rumor (almost certainly propagated by Saperstein himself in an attempt to scare off NBA teams) was that the Globetrotters were prepared to offer Russell $50,000. In truth, they had really only offered him $15-17,000, but the rest of the world did not know that. With an offer so large, NBA teams were justifiably worried about spending a top pick on a player who would eschew the NBA for the Globetrotters. What Harrison and most other NBA owners did not know, though, was that Russell was never going to play for the Globetrotters, both because he was too competitive to play anywhere but the best league in the world and also because he felt that Saperstein disrespected him when Saperstein tried to recruit him (ignoring Russell himself and directing his pitch to Russell's college coach, Phil Woolpert).

While Harrison did not know Russell had no intention of playing for the Globetrotters, Auerbach, on the other hand, did (former Celtic Don Barksdale was friends with Russell's family and he informed Auerbach that the Globetrotters were not a real contender for Russell). Moreover, when Harrison actually met with Russell, Russell informed him that it would take $25,000 to get him to play in Rochester. He might as well have been asking for $250,000, as Harrison would be extremely hard pressed to pay that sum. Russell ended up signing with the Celtics for roughly $22,000 (pro-rated for time Russell missed in his first season representing the United States in the Olympics).

The last (and perhaps the most notable) reason Harrison would be willing to pass on Russell was that the Royals already had a great center. Maurice Stokes was the second pick of the previous NBA Draft and had just won the NBA Rookie of the Year. Stokes tragically suffered a brain injury during his third season in the NBA (he was an All-Star in all three seasons) that ended his career and ultimately his life in 1970. However, in 1956, he was a star player and made the idea of spending so much money on another center seem unwise.

Ultimately, the Royals drafted a well-regarded first team All-American guard/forward from Duquesne University, Sihugo Green. Green had a respectable career in the NBA but was never an All-Star.

Given their financial situation and the fact that they already had Stokes on the team, it seems realistic that the Royals would pass on Russell. However, what about the Ice Capades angle?

Harrison did acknowledge that Brown did, in fact, give him assistance with the Ice Capades at one point, noting to Terry Pluto for Pluto's classic 1992 oral history of the early days of the NBA, Tall Tales: The Glory Years of the NBA, in the Words of the Men Who Played, Coached, and Built Pro Basketball:

It is true that I had the Ice Capades for two years, then I was in jeopardy of losing them. I was having trouble with the people who ran our building in Rochester, and Walter Brown did come down to talk to them, saying that I should have the Ice Capades. But this had absolutely nothing to do with the draft. Walter and I were friends and we did favors for each other all the time.

However, as noted above, the "two years" Harrison had the Ice Capades were 1955 and 1956 -- after the NBA Draft. Therefore, any help Brown gave Harrison could not have been related to the Spring 1956 NBA Draft, since Harrison's problem with the arena owners did not come about until after Rochester had the Ice Capades in Fall 1956. Note that Harrison split from Rochester in the Spring of 1957, so it surely would stand to reason that he had trouble with the people who ran the building. It appears as though Auerbach is just conflating an incident of Brown trying to help Harrison in Winter 1956/Spring 1957 with the Russell draft of a year earlier.

Putting it all together, it seems that it was an open secret in the NBA that Harrison was not going to draft Russell with the number one pick, both for money reasons but also because he already had a future Hall of Fame center in Maurice Stokes. Meanwhile, Rochester already had the Ice Capades before the NBA Draft and it does not appear that whatever conflict Brown helped him with occurred before the NBA Draft. So while we will never be able to know precisely what was said fifty-nine years ago, the information that we do have suggests that Auerbach exaggerated what happened to the point where I feel safe in stating that the legend is.