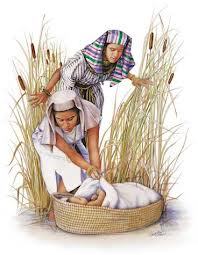 According to Søren Kierkegaard, the first existentialist philosopher, "Each individual is solely responsible for giving meaning to life and living it passionately and sincerely." Taking responsibility for the meaning of our life is a significant objective, which may take an entire life (and career) to accomplish. It is a lot easier to follow the flow of the stream--to focus on a seemingly successful career or accruing as many Facebook "friends" as possible--than it is to meaningfully impact our families, our communities and our co-workers.

How does this relate to Moses, the founder of Judaism, the religion par excellence, and seemingly the very opposite of atheistic existentialism? And what can we learn from his choices when pondering our own careers?

The first story about Moses in the Torah might shed some light. Moses, the son of Hebrew slaves in ancient Egypt, was found in a basket floating on the Nile by Pharaoh's daughter, Batya. She adopted him and raised him in Pharaoh's palace. An ascending career path to the very top of Egypt's aristocracy was drawn for him. Moses just had to stay on this path and ignore his Hebrew roots. However, Batya had told him about his slave origins, and he felt for his brothers' suffering. So when he saw an Egyptian beating an Hebrew slave one day, "he looked this way and that way" (Exodus 2:12); looking for an Egyptian opposing injustice or for a Hebrew rebelling against it, but he saw that "there was no man".

At that very moment, most of us would have look the other way, thinking "It's not any of my business, "I have enough problems on my own and can't get into this," etc. However, Moses didn't look the other way. He did the very opposite: According to scripture, "He smote the Egyptian, and hid him in the sand." That was the end of his meteoric career. Pharaoh decreed his death.
We may think that this first action was out of wrath based on a sharp sense of belonging to the Hebrew people that was exacerbated by a childhood far from his brothers--perhaps even some kind of ruthless nationalism. However, the story of Moses in the Torah continues. Moses, an Egyptian refugee in Midian, stands up against chauvinist shepherds to help seven young women water their flock (Exodus 2:17). Apparently, Moses did not learn from the catastrophic results of his first action. He again put himself, and his future, at risk. His actions did not take into account his fragile refugee status and the need to keep a low profile. But once again, Moses answered His calling and chose selflessness over self-preservation--his "burning bush": fighting for freedom and opposing injustice.

Moses took responsibility. He gave a meaning to his life as defined by Kierkegaard by choosing the more difficult path of freedom and meaning rather than the drawn path of dependence and comfort. That's how the Torah implicitly justifies Moses' election as the prophet of Judaism and the ultimate Freedom leader.

Moses was in fact following Batya's example. She had rebelled against her own father's decree to throw all Hebrew baby boys born to the Nile when she saved and adopted Moses (Exodus 2:6). She had made her own choice for freedom and meaning by becoming the first single mom. She set the example for Moses of how to live a life full of meaning.

Batya and Moses are truly existentialist leaders who may inspire us when we face dilemmas in our own journey--both in our personal life and in our careers. Will we stand up for what we believe and be ready to pay the price? Will we look at the big picture rather than sticking to our given job profile? Will we choose a more meaningful life? The beauty of life, and the biggest challenge in any career, is that in the end, the choices are ours to make. What will your choice be?