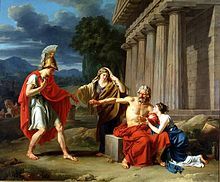 What happened to Rafael Nadal, in his loss to Fabio Fognini in the third round of the US Open is what everyone is afraid of: falling from a great height. It, in fact conforms to Aristotle's definition of tragedy which is the fall of a man of high position. In modern life we have revised the Aristotelian view to conform to the tragedies and indignities of everyday existence in which lives are cut short by unforeseen events like diseases and accidents. But the loss following a 2-love lead exemplify the notion of hamaria or tragic flaw, one of whose most common elements is hubris or excessive pride. Did Nadal underestimate his opponent once he took the lead (though he'd already had losses to a player, he'd once easily dispatched, earlier in the year)? Was the rest of the match a working out in microcosm of what happens when a champion thinks he has it in the bag with a big lead or reputation and then comes a cropper? That's what happened in the famous fight in which Buster Douglas knocked out Mike Tyson in Tokyo. Nadal told the Guardian, ("Rafael Nadal's biggest loss is the aura of invincibility that has defined him," 9/5/14),

"The sport to me is very simple, no? If you are playing with less confidence and you are hitting balls without creating the damage to the opponent that I believe I should do, then they have the possibility of attack."

When you think about it, classic tragedy has it right. Too much success goes to your head. Whether Tiger Woods' philandering was ignited by his success or vice versa, success creates a feeling of impregnability, what analysts term narcissistic megalomania. When you are one of the titans it's easy to throw caution to the wind whether in the match or in the behavior surrounding it. And once a champion begins his or her fall, it's a long and often Sisyphean road back to the top.