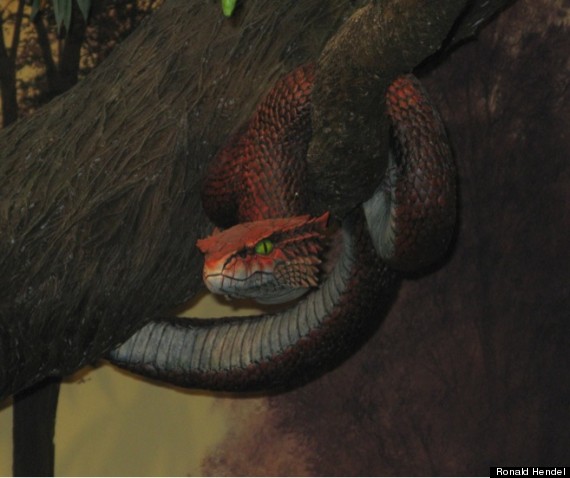 The photo above from the Creation Museum says it all. The snake in the Garden of Eden is a fierce and scary creature. But is he Satan? He has horned facial scales in the picture, so maybe he is.

The Bible is more ambiguous. In Genesis, the snake is introduced as "more cunning than any of the creatures of the field that the LORD God had made" (Genesis 3:1). He's a creature, but a smart one. In the book of Revelation, Satan is called "the ancient serpent" (Revelation 12:9, 20:2), which refers to the snake in Genesis. So in the New Testament the snake is Satan. How did a smart "creature of the field" come to be identified with the Prince of Darkness? That's an impressive leap in a reptile's résumé. The answer tells us a lot about the importance of Genesis, and how people thought about it, in the early years of Judaism and Christianity.

In the Genesis story, the snake plays the role of a trickster. He verbally seduces the woman into breaking God's commandment and eating from the forbidden fruit. But this crime is itself ambiguous. It is a clear transgression of God's command, but it also makes Adam and Eve more than they were before. The snake says that the forbidden fruit will make them "like gods, knowing good and evil" (Genesis 3:5), and God later expels them from the Garden precisely because they have "become like one of us, knowing good and evil" (Genesis 3:22). Knowledge "like gods" is impressive, even if it's not quite clear what this knowledge consists of. The price of this knowledge is curses and expulsion from the Garden, lest the people also become immortal by eating from the Tree of Life. Knowledge is a boon, but its cost is very high.

The snake tricked the humans into disobedience, but he wasn't lying about the benefit. Although humans are condemned to hard labor -- on the soil and in childbirth -- we have the benefit of knowledge, which somehow makes us "like gods." We're both better off and worse off because Eve heeded the snake. Life as we know it is complicated, colored by pain, mortality, knowledge and joy.

This is the Genesis story's portrait of the nature of human existence and how we got here. The snake -- because he is smart and can talk -- is an agent in this story of human transgression and change. Snakes are indeed scary and sometimes deadly, so it is not far-fetched to see this reptile as a trickster rather than, say, a sheep or a rabbit (although the rabbit is a trickster in some Native American stories). But to some early interpreters, the role of the snake was too important, too momentous, for the snake to just be a smart reptile. He had to be more.

The wider religious context also comes into play. During the intertestamental period (between the later books of the Old Testament and the first books of the New Testament), the cosmos became crowded with good and bad angels, and the leader of the wicked angels was called Satan. Previously he was a minor figure who was subservient to God, as in the book of Job. Now a cosmic duality came into being, in which the rulers of this era were the forces of darkness, led by the Prince of Darkness. (We see this cosmic duality in full strength in the Dead Sea Scrolls.) According to this new religious picture, when God finally intervenes, he will destroy all the wicked -- including angels and people -- and the righteous people will live as Adam and Eve did in the Garden of Eden.

Since the snake was guilty of causing the human transition to a world of pain and mortality, which God will overcome by defeating the forces of darkness, it was only natural to see a link between Satan and the snake. With the destruction of Satan, the snake's legacy will be over, and we will live in paradise once more. In this religious scenario (which we call apocalypticism), Satan and the snake play similar roles, and so the two figures become one. When Satan, the ancient serpent, is destroyed, we can go back and finally eat from the Tree of Life and be immortal in paradise. The story's ending changes from tragedy to comedy, to a happy ending for the righteous.

The identification of the snake with Satan is more than a side-story in Judaism and Christianity. It shows how important the book of Genesis was (and still is), and how thinking about Genesis has long been a central activity. For our forebears and for many today, the sense of the world is linked to the senses of Genesis. Or, to put it differently, it is a mutual entanglement, in which the world is interpreted through Genesis, and Genesis is seen through the conceptual and moral framework of the world.