Few events in Star Wars history are quite as complicated as Mark Hamill's infamous car accident he suffered after primary filming was complete on the original Star Wars film. Since the accident occurred before the first film was released, Hamill was not yet a major star and as a result there was little to no media coverage of the accident at the time. Heck, there is even some debate over when the accident occurred (it's not a significant debate, though, basically just a matter of whether it happened in December 1976 or January 1977. I think January 1977 is correct). So when people are forced to cover a story after the fact, quite naturally the accounts of the accident have become varied, from "He just broke his nose and one of his cheek bones" to "they had to reattach his nose." Accounts of the accident are all over the place. One story about the accident, though, that has remained fairly consistent is that the scene early in The Empire Strikes Back when Luke Skywalker is assaulted by the Yeti-like creature known as the Wampa was written into the film to explain away Mark Hamill's facial injuries for the rest of the film.

I lean towards it not being true.

At the time of the accident, Hamill was going through a frustrating point in his career. In early 1976, before filming began on Star Wars, Hamill had starred in the pilot for a proposed TV series for Lorimar Productions called Eight is Enough, about a family with eight children (Hamill played the eldest son, David). The series was not picked up by ABC for the Fall 1977 TV season but Lorimar Productions retained contract options on the actors for the rest of the year and Lorimar kept on trying to sell the show to ABC. In the fall of 1976, with Hamill now as one of the leads of a major motion picture, ABC agreed to pick up the series. Hamill asked to be let out of his contract (since he now had a burgeoning film career) and Lorimar agreed but ABC was not prepared to let the young star out of his contract. All of this was on his mind when he got into a bad car accident. He discussed the accident with Gossip Magazine in mid-1978...

What happened was that I was on the wrong freeway. I was way out in the sticks somewhere and there were no cars and no traffic, thank God. I was going about 65-70 mph... I was speeding, going too fast... and what happened, I think, was that I tried to negotiate an off-ramp and lost control, tumbled over, and went off the road. I fractured my nose and my cheek.

He continued in the interview, though, to mock the rather overly sensationalized coverage of the accident...

Yeah! I read in magazines, "Mark Hamill almost killed in auto crash." And what prose... "As he dragged himself from the wreckage... the flames were higher"... you know?... "his nose slid off his face." And I'm going, "Wow, this is great! But I don't remember it!"

In a 1980 interview with a Flordia newspaper, Hamill noted:

My plastic surgeon took cartilage from my ear and built up my nose.

With Hamill now too injured to do any immediate filming, Eight is Enough had to recast his role with Grant Goodeve. Hamill, too, had some fun in the Gossip Magazine interview with the notion that he got into the accident to get out of having to do the TV series:

It seems funny... but people have raised that question... if I had this accident to get out of doing the series. If people knew what a coward I was, they would know what a lie that has to be because I wouldn't have the guts!

So Hamill definitely had to have surgery to fix his nose and his cheek bone and it obviously was something quite scary for him to deal with. But was it such a major accident that it would require a scene being written into the film to address his new face?

Well, do note that in July of 1977, Hamill began filming the teen romp Corvette Summer, where he plays a teenager trying to recover his stolen Corvette (oddly enough, his co-star in the film, Annie Potts, had herself been in a horrific car accident in 1973 that left her with a crushed femur, compound fractures of both her legs and the loss of the heel of her right foot. Her husband, also in the accident, lost a leg). So six-seven months after the accident, he was in good enough health to film a movie and he sure didn't look too different. 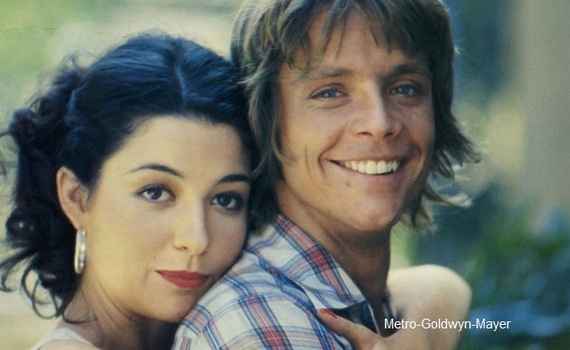 On the DVD commentary for The Empire Strikes Back, George Lucas specifically denied that the Wampa scene was written to address Hamill's injuries, noting that the scene had been written some time earlier. While Lucas is correct, I do not know if that evidence is necessarily rock solid proof, since the first draft of The Empire Strikes Back was written by Leigh Brackett in February of 1978, over a year after Hamill's accident (and roughly a month before Brackett sadly passed away - Brackett's screenplay, by the way, was later changed dramatically, as we detailed in an old Movie Legends Revealed about how Darth Vader was not yet Luke's father in her first draft).

That said, since Brackett's first draft was written over a year before filming began on The Empire Strikes Back, I do find it a bit hard to believe that Brackett was writing a scene to address Hamill's injury when A. Hamill had already done a film since the injury without incident and B. He would not be doing the film for some time, so writing in a scene in 1978 based on what Hamill was going to look like in 1979 seems like a bit of a stretch.

Even if you wished to argue that Hamill's face looked worse in 1979 than it did in 1977 (perhaps due to the effects of the plastic surgery wearing off a bit), it would not explain why Brackett would have written in the Wampa attack in early 1978 to address what Hamill was going to look like a year later. In other words, the argument that the scene was written into Empire is based on the supposition that Hamill showed up for filming and Lucas and the production thought, "Man, we really need to explain what happened to his face." That was not the case, obviously, as the Wampa scene was written over a year before filming began.

However, since Brackett died just a month after writing the first draft of The Empire Strikes Back, I don't think we'll ever be certain as to what she was thinking when she wrote that scene, so because of that, I can't 100% rule out that she wrote that scene to address Hamill's car accident. But the facts of the situation combined with Lucas specifically saying that that wasn't the motivation (something he also told Hamill when Hamill asked him about it years ago, which Hamill recounted to Starlog in 1999) plus the fact that Brackett wrote her script based on a basic outline from Lucas (suggesting that perhaps Lucas had the idea for the wampa attack much earlier, which is why he is so confident it had nothing to do with Hamill's injury) makes me willing to go with the legend as...