WASHINGTON--Fur is back. Big time.

The high glam factor of Barack Obama's inauguration, and the city's brutal cold snap seem to have given many revelers license to come out of their pelt-packed, politically-incorrect closets swathed in the hides of creatures great and small.

At last night's inaugural ball hosted by TheRoot.com and the Washington Post, DJ Biz Markie--he of the enormo physique--wore an ankle-grazing black mink greatcoat, size 62 long, as casually as if it were a bathrobe.

"I like my fur. I have, like, 15 of them: three minks, three sables, two chinchillas..." says the unapologetic Beat Box regular on the "Yo Gabba Gabba" kids' TV show.

Designer Dianne von Furstenberg came to the same soiree at the National Museum of American History sporting vintage monkey fur, which is black, shiny, coarse, very long and poker straight. "I've had it 40 years, so it's been dead a long time." she explains. "Sometimes I tell people it's nylon."

"They all died from acid reflux," Colyar solemnly swears.

And the bleat goes on.

Katrina Peebles had two fur coats at the National Portrait Gallery unveiling of Shepherd Fairey's original, iconic Obama graphic: a lush Russian sable that her husband--Miami and DC real estate developer Donahue Peebles--gave her when their son was born 14 years ago, and a mink swing coat with a zig-zag hem and blood red lining that she'd loaned to a shivering friend from Florida. 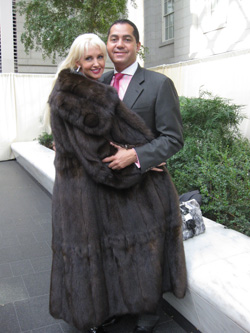 Katrina Peebles envelopes her husband Donahue, in her sable coat.

Peebles concedes she "felt bad" wearing her Galanos mink to the National Zoo with her daughter, a place, after all, where the animals are supposed to feel safe in their own skins.

"I knew it was anti-green. But it was just so cold, " says Peebles, who owns a half-dozen furs worth $400,000. (She prefers that all big gifts from hubby come from furriers, not jewelers). Then she adds: "I do eat red meat, but I do a lot of things for kids."

Bush administration Chief of Protocol Nancy Brinker topped her gray suit with a woven shawl of indeterminate taxonomy. With the deft diplomacy required by her day job, she called it "re-grow-able...It's not a pelt. It's shorn." She also carried an aubergine mink purse, and wore a black overcoat lined in something brown and fluffy.

It isn't just boldface names who are piling are on the furs. All over town, revelers are bundling up in fur jackets, coats, vests, hats, scarves, cuffs, muffs, boot-tops and stoles..

And where there are folks in fur, there is PETA, People for the Ethical Treatment of Animals, which scored a few raid-paint hits on hapless-ballgoers at Bill Clinton's 1997 inauguration.

Last week they chose an inaugurally-slow Thursday to stage an extremely public act of charity (are there any other kind these days?) just blocks from the White House.

At a table in Farragut Square, a media mini-scrum checked out the giveaway of used fur coats to homeless women who'd been driven across town by staff of the shelters where they seek refuge. As cameras rolled, the women, some with children, pawed through the piles, trying on the most promising. Several of them happily left with a warm coat. Even a homeless man or two got lucky, said Ashley Byrne, PETA's campaign coordinator. The gents fit into castoffs from some very large ladies.

The inventory comes from remorseful fur owners who donate them to PETA for use as agit-props in its traveling anti-fur-crusade-cum-street theater.

The coats range from cheap ratty rabbit (marketed in some quarters as "lapin," which is French for bunny) to the occasional mink with the requisite satin lining and elaborate monogramming.

Over the years, PETA has painted, burned, buried, or cut up for use as animal bedding all those tax-deductible wraps. Nor did this batch escape alteration.

PETA marked the linings and sliced holes in the skins to minimize resale "marketability" while retaining warm-ability. This ensures "that people who weren't homeless wouldn't have any incentive to want one," say Byrne.

This week PETA volunteers--some of them clad in raccoon, fox and rabbit costumes--will leaflet fur-swathed humans about the error of their ways. "We realize people have no idea how these animals suffer, how they are beaten or electrocuted or skinned alive," says Byrne. The hope is that education begets donation.

To spread the word in downtown gridlock, PETA has bought ads on 20 DC pedi-cabs, those rickshaw-derived vehicles pulled by strapping young bi-peds.

It's not clear what kind of reaction the protesters will elicit as Obama supporters dress and redress for multiple events that include church services, mass outdoor gatherings, black-tie balls, casual receptions, cocktails parties, and on and on and on.

To be sure, millions who love this president love all God's creatures: designers, models, celebs, wanna-bes and just plain folk who subscribe to the PETA mantra that "Fur Is Dead." These folks who may have zero tolerance for anything made from animal products, leather included, and who may go so far as to insist on cruelty-free silk. Others have made nuanced calculations about what works for them.

Sandra Nelson, a registered nurse from Gainesville, Va., is s a quiet convert.

"I love real fur but once you get a puppy it's hard to wear it anymore. Besides, they make coats now that look so real, that are so warm and that are affordable," she says, fighting the cold in a black Albert Nipon coat lined in thick polyester.

Lawyer and government contractor Tiffany Brown of nearby Potomac, Maryland wore a striking, floor length 1940s faux leopard that was cut like a hostess gown: "It's high-style and not real. I love that," she says. However, she also owns a fox jacket her father gave her. 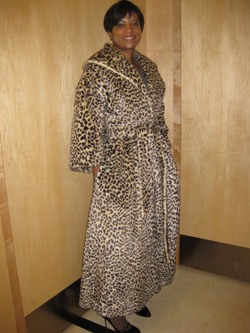 Tangela Lamptey is another paradox, a fur-wearing vegan. But the Altanta-based Continenal Ailines flight attendant is totally thrilled with the yummy pink sweater, woven much like Brinker's shawl, that she found on a run to China.

"I bought it because I like it, and I liked the fact it wasn't real. But I also brought my grandmother's mink to Washington because I was afraid of the frigid weather."

"Fur is still popular, but it's not hot," says the Washington Post's Robin Givhan, winner of the first Pulitzer ever awarded for fashion writing. "It's not something that was on all the runways the way it was a couple of years ago, when Dolce and Gabana did a whole collection of fur skirts, dresses and handbags. But it's definitely still alive and well and it's still a healthy industry."

Well, maybe not that healthy, given the current economy and the last couple of warmish winters, though certainly not in AIG or Chrysler territory either.

"Fur is suffering the same fate as luxury apparel, but it's been a very cold winter, and across the country our retailers report getting calls from people going to the inauguration," said Keith Kaplan, who heads the L.A.-based Fur Information Council of America.

The Obama presidency, he notes, comes amid a shift in consumer demographics.

"African-American women have been representing a larger volume of fur sales because of growing affluence in the community, and because of the effect of that whole urban look, for men, too. It's the bling thing." In 2002, says Kaplan, fewer than 17 percent of fur buyers were African-American. By 2006, the figure had jumped to nearly 27 percent.

In return for paying $19,000 in back taxes that the diva owed in late March, thereby saving her Michigan home from the repo man, PETA wanted her to forsake fur forever and give the group every last one of her over-the-top coats.

"Oh yes, Aretha and her golden sable,"chuckles Kaplan. "She has quite a hefty closet but she turned them down."