“We’re really starting to feel the pain from this snowpack drought," Inslee said at a press conference. "Impacts are already severe in several areas of the state. Difficult decisions are being made about what crops get priority water and how best to save fish. ... We have some tough, challenging months ahead of us. We’re ready to bring support and relief to the hardest hit areas of the state. We’re going to do everything we can to get through this."

The drought in Washington, famous for lush greenery and rainy weather, is less severe than what California has endured since 2011. Data released by the National Drought Mitigation Center on Thursday shows how conditions have worsened in Washington over the last year. 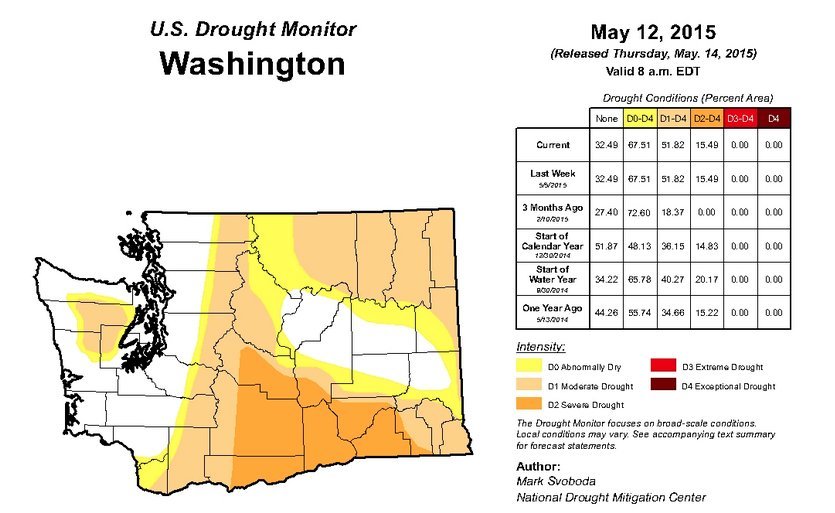 Drought emergencies also have been declared in parts of Oregon and Nevada.

Washington Department of Ecology Director Maia Bellon described the drought as "unlike any we've ever experienced," with snowpack in the mountains dropping to just 16 percent of normal, and 78 percent of streams running below normal.

“Rain amounts have been normal, but snow has been scarce," Bellon said. "And we’re watching what little snow we have quickly disappear. ... We've been busy the past few months working with sister agencies, tribes and communities to prepare and respond to this. We’re working hard to help farmers, communities and fish survive this drought.”

A press release from Inslee's office warns that the Department of Agriculture predicts the drought will cause $1.2 billion in crop loss this year. Washington's agriculture-rich Yakima Valley is known for its cherries, apples, mint and wine grapes, Northwest Public Radio noted, but farmers in the region with junior water rights anticipate receiving less than 40 percent of their usual supply.