The small group of Christian protesters first showed up outside Tim Thompson's new marijuana shop in rural Washington about three weeks ago, holding signs that declared "Just Say No To Pot" and "God Judges Sinners."

Their leader, Dale Brown, is a proselytizing author and musician living in Prosser, Washington. He thinks opening a legal weed shop in the small town of 5,800 is a terrible idea.

"I have spent over 30 years as a minister of the gospel and I have plenty friends and relatives whose lives have been destroyed by drug abuse usually starting with the easiest to get, which is usually pot," he told The Huffington Post in a Facebook message. "Having a retail recreation store sends the wrong message to kids." 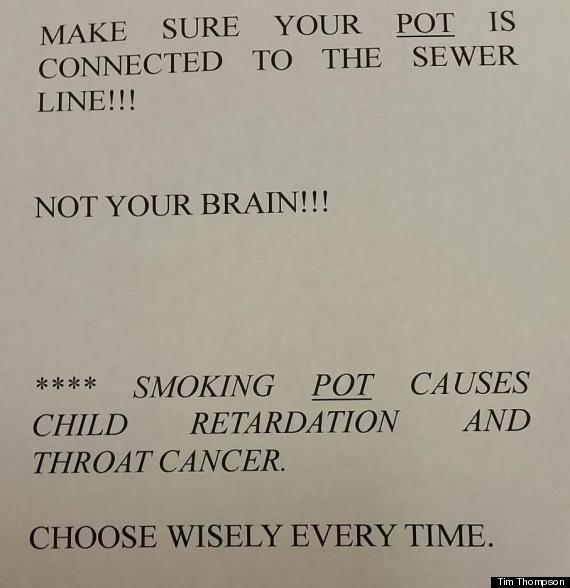 Tim Thompson said he found these fliers posted around the neighborhood after getting approval to open a recreational weed shop in Prosser, Washington. A local group of protesters has picketed his store, but Dale Brown, the group's leader, said he's not behind the fliers.

Brown, 61, and his small group of allies have failed so far: The retail marijuana store they've been picketing, called Altitude, opened its doors on Tuesday morning. Thompson, a 42-year-old local chiropractor who co-owns the store, said he is looking forward to brisk business. Despite reported weed shortages, Thompson said he expects to sell about 15 pounds of weed in the first two days he's open.

On Tuesday, Washington state launched itself into the recreational marijuana business, allowing anyone over 21 to buy up to an ounce of pot, even if they have no medical need for it. The state is following on the heels of Colorado, which first put recreational weed on sale Jan. 1.

Despite the fact that the state has legalized the drug, about one-quarter of all the towns and cities in Washington have bans or temporary moratoria on retail weed sales, according to the Municipal Research and Services Center, a nonprofit in Seattle that consults local governments in the state. Many of these locales say that weed should be illegal because it is still listed as a Schedule I drug under federal law, meaning the feds believe it has no medicinal value and a high potential for abuse. Under federal law, getting caught with weed, even if it's a first offense, can earn a year in prison and a $1,000 fine.

The small, local fights highlight the challenges legalization advocates face in trying to grow support for recreational marijuana state by state. Even as Washington allows for the sale of marijuana, the fight over the drug is far from settled. 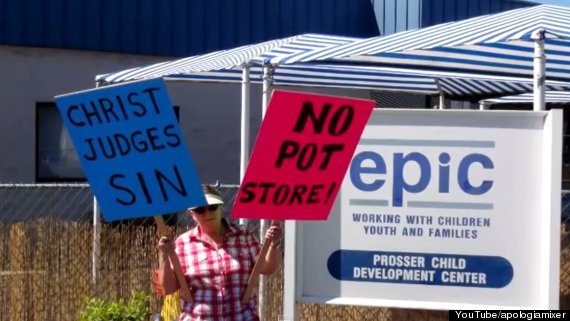 A Christian protester voices opposition to a marijuana dispensary in Prosser, Washington. 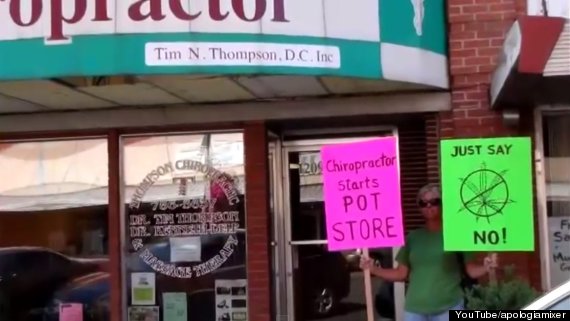 A protester outside Thompson's chiropractor practice.

While Colorado made it simple for local governments to ban the sale of marijuana, it's much less clear in Washington whether municipalities have the power to keep weed out of their towns. There's confusion over whether Washington's law permits localities to ban recreational marijuana. Pro-marijuana groups argue that localities can't override state law. Even the Washington state constitution has a provision saying local jurisdictions can't prohibit any activity that state law authorizes, said Alison Holcomb, an attorney at ACLU Washington who helped craft Initiative 502, the 2012 law that legalized weed in the state.

Yet, Washington's attorney general issued an opinion in January saying local bans were permissible. That opinion isn't binding, but it does put the weight of the state's top legal officer behind any towns and counties that choose to ban pot sellers. 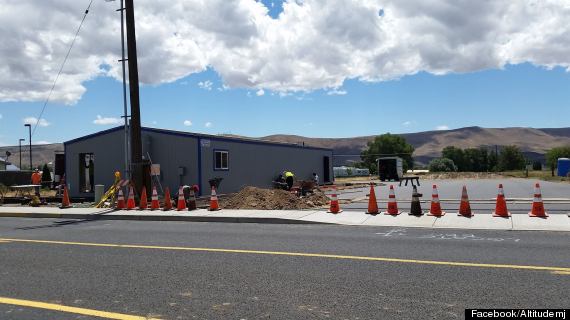 The two sides have taken their battle to the courts. At least two lawsuits were filed last month in Washington courts by citizens frustrated that their city is blocking them from the potentially lucrative business opportunity in marijuana.

Shaun Preder, 24, sued the central Washington city of Wenatchee (population 32,500) last month after trying unsuccessfully to get a license to operate a retail marijuana dispensary there, said his lawyer, Hilary Bricken with the Canna Law Group. Wenatchee voted last year not to allow marijuana businesses in the city, saying that no licenses will be given to businesses that aren't compliant with federal law. 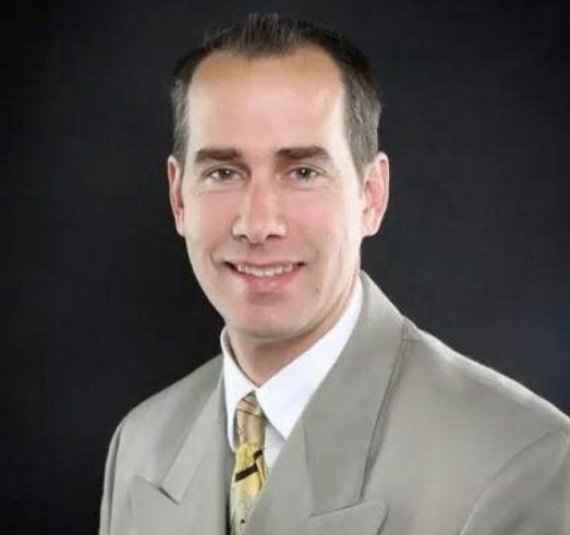 Tim Thompson is the co-owner of Altitude, a legal marijuana shop in Prosser, Washington.

Weed advocates argue that local economies can see huge benefits by opening themselves up to the marijuana business. Altitude, for example, already employs 40 people, Thompson said, which made it one of the largest employers in Prosser before it even opened its doors. And Thompson expects to hire more employees soon.

Washington as a whole is expected to make about $190 million from the taxes and fees associated with legal pot during the first four years of sales, according to the Economic and Revenue Forecast Council, an independent agency that advises the state government on the budget and tax revenue.

Of the roughly 77 cities in Washington that have suspended or banned legal pot sales, only eight or so have enacted outright bans, according to the Municipal Research and Services Center.

The other 70 or so have only initiated temporary bans, and they've done so for a variety of reasons -- not just because they want to be compliant with federal law, said Brittany Sill of the Washington Association of Cities, a corporation that represents Washington's cities and towns to the state's legislature.

"Each one of those cities has different methods and a different direction they’re headed," Sill said. "It's kind of like hitting a pause button while they figure out what they want."

Many towns are waiting to see how the state government will share revenues with them, something that still hasn't been ironed out in Washington, Sill said. Others are just trying to figure out if they even have space for a marijuana dispensary: Because of strict zoning regulations, including rules prohibiting pot businesses from operating within 1,000 feet of certain places like daycare centers, schools, libraries, parks and transit centers, finding a workable spot for a grower or retailer can be tough.

Even though Altitude is now open for business, Brown plans to keep up the fight to ban legal marijuana.

"We can put pressure on the chiropractors, contractors and anyone else who is supporting this," he said. "As Christians, we are trying to reach the hearts of people, not simply create laws."

For his part, Thompson said he doesn't mind the protesters exercising their right to free speech. He admits that he too was once against legalization and thought marijuana was "a destructive drug," just as bad as cocaine or heroin. But now that he's come around, he recognizes that legalization could be a boon for the economy.

"The protesters seem to speak with emotion, not with facts," he said. "The facts are that legalizing marijuana makes good sense. It has many uses beyond recreational use. And lots of people will come to Prosser, to use our store, and to use all the other businesses in town. It's really a no-brainer."

Dale Brown has produced videos like this one that advocate against legal weed coming to his hometown.

CORRECTION: A previous version of this story stated that Dale Brown was behind the anti-marijuana signs posted around the neighborhood near Tim Thompson's store. He has no connection to the signs.