In one of the most bizarre Big Coal public relations ads yet, online readers of the Washington Post today were forced to view a fatuous "clean coal" ad prior to viewing an extraordinary photo galley on "Death at American coal mines."

In an excellent and in-depth look into regulatory failure, Post reporters David A. Fahrenthold and Kimberly Kindy examine nine deaths in various mines since the Upper Big Branch disaster in April. The Post reporters conclude: "For safety experts and miners' families, these recent disasters tell a familiar story: Enforcement efforts have been hampered by a backlogged appeals system and the lack of penalty for repeat offenders. The new federal crackdown still couldn't ensure safe conditions underground."

Even more notable: An estimated 450-500 coal miners have died from black lung disease in the last six months, according to figures from the National Institute for Occupational Safety and Health. In one of the most scandalous crises in workplace safety in the United States, over 10,000 coal miners have died needlessly from black lung disease (from the inhalation of coal dust) in the last decade.

According to Tony Oppegard, the former MSHA investigator and long-time Kentucky attorney hailed by coal miners as their great defender:

"Coal miners are awaiting the day when MSHA will aggressively use the enforcement tools given to the agency by Congress in the 1977 Mine Act. Specifically, the provision allowing MSHA to seek a federal injunction when a mine operator has a pattern of violations that constitutes a "continuing hazard to the health or safety of miners" (Section 108(a)(2) ; and the provision that requires MSHA to place a mine operator on a "pattern of violations" when the operator continually violates mandatory health or safety standards. To MSHA's shame, the agency hasn't used either provision in 33 years. The 1977 Congress would be amazed and disgusted by MSHA's refusal to the use these powerful enforcement tools."

In the face of such tragedy in the coalfields, it continues to boggle the mind how Big Coal lobby fronts like AmericasPower.org exploit the human cost of coal in their ads, like this one in the Washington Post, opposite the photo series: 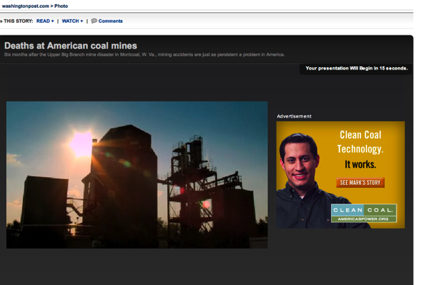 While I applaud the journalists and photographers for their continued attention to the ongoing deaths in the coal industry (and for not forgetting about the families in Montcoal), my applause ended when I clicked on the photo gallery to see Pulitzer Prize winning photograph Michael S. Williamson's images.

It's one thing to be subjected to Xerox or Amway ads before watching the latest news from around the world (I can't stand the ads myself, and always mute them). Yet to me, it seems, it's even more egregious when a corporate energy lobby like AmericasPower.org purchases space to promote the industry that killed the miners. Yet that's just what happened when I clicked on the Washington Post's photo gallery for this feature:

Responding to the growing deathtoll from coal mining in their region, residents in southern Illinois have been posting black crosses at coal mines, coal ash and slurry piles, and at coal-fired plants in the coal belt.

Perhaps AmericasPower.org and the Big Coal lobby might like to use one of their images in "clean coal" ads in the future? 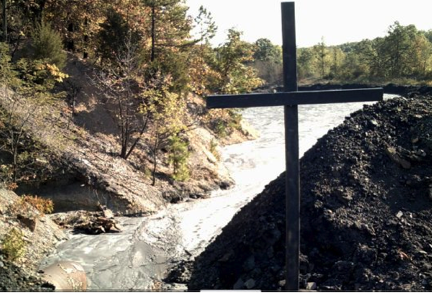