Make no bones about it: Washington state was once home to dinosaurs -- and scientists now have evidence.

Paleontologists with the University of Washington's Burke Museum confirmed in a study published Wednesday in the journal PLOS ONE that a fossilized bone discovered in 2012 is in fact the state's first dinosaur.

A team of scientists looking for prehistoric shells unearthed the 80 million-year-old fossil on a beach in the San Juan Islands between Seattle and Vancouver, British Columbia. It is a 16-inch fragment of the left thigh bone of a two-legged carnivorous dinosaur related to Tyrannosaurus rex and the velociraptor, but the paleontologists haven't been able to identify the exact species because the piece of bone is so small. 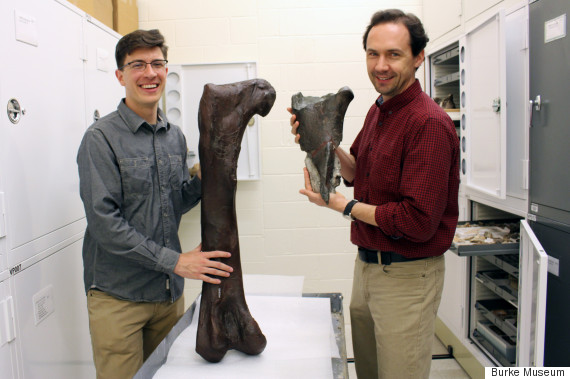 Dr. Christian Sidor, Burke Museum curator of vertebrate paleontology (left). and Brandon Peecook, University of Washington graduate student, show the size and placement of the fossil fragment compared to the cast of a Daspletosaurus femur. (Photo Courtesy of the Burke Museum)

“This fossil won’t win a beauty contest,” study co-author and Burke Museum Curator of Vertebrate Paleontology Christian Sidor said in a museum news release. “But fortunately it preserves enough anatomy that we were able to compare it to other dinosaurs and be confident of its identification.”

It took the scientists several years to remove rock from around the fossil, compare it to other known fossils to find a match and then submit their scientific paper through the peer-review process.

“For a long time, we thought very little of the specimen,” Sidor told The Seattle Times. “We didn’t think we could identify it, other than as a large piece of bone. Then we found a critical piece of anatomy.” 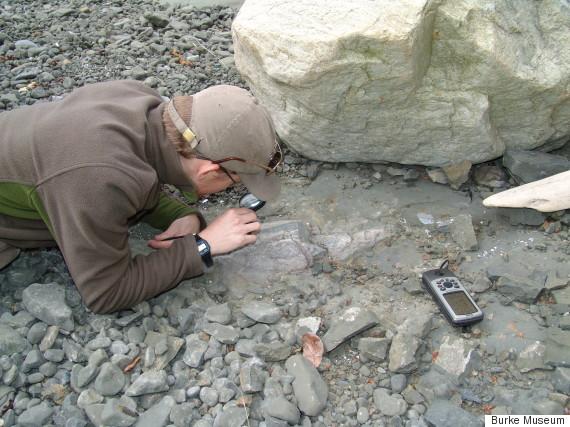 The fossilized mud filling in the hollow center of the bone and certain anatomical features of the specimen led scientists to believe it was from a dinosaur, study co-author and University of Washington graduate student Brandon Peecook told Tacoma newspaper The News Tribune (see video above). After traveling to several countries to compare the fossil to others, they found a "dead ringer" in a more complete tyrannosaur skeleton from Canada, Peecock said.

Washington is now the 37th state where dinosaurs have been found. It is "pretty unlikely" that evidence of dinosaurs will ever be found in the remaining 13, Peecock added.

Dinosaurs were land-based animals and thus their fossils have typically been discovered in rock that was part of dry land tens or hundreds of millions years ago. But what is today Washington state was mostly underwater during the time of dinosaurs, according to the museum. The Washington dinosaur was found in marine rock, making the find especially significant. The dinosaur bone was found near fossilized shallow-water clams, indicating that the animal's body came to rest on the seafloor after it died in or near the water, the Burke Museum explained.