For Al-Qaeda affiliates around the world, holding westerners hostage and threatening to kill them if their governments don't pay for their release is big business. In fact, kidnapping is a massive windfall for terrorist organizations in general. According to an in-depth investigation by The New York Times published last year, Al-Qaeda and its affiliates have earned $125 million in ransom payments since 2008 - most of which was paid by European governments like France and Italy that have made it a habit to do everything in their power to get their people released (even if it means sending millions of dollars across the desert). Al-Qaeda in the Islamic Maghreb is one of the most profitable branches of the terrorist movement precisely due to its policy of kidnapping western tourists and selling them back to their governments. Indeed, the same Times investigation found that over $91 million was paid out to AQIM over the past six years, including a hefty price-tag of $40 million for four French nationals.

Hostage policy is one of those areas that divides the United States and Great Britain with their European counterparts. Washington refuses to buy back their citizens under any circumstances based on the compelling argument that falling for this scheme does nothing but encourage terrorist groups to take more hostages. Yet while the policy has been set in stone for decades, shutting the door on ransoms tends to leave the U.S. Government with very limited options in the event that an American is taken captive. This is one of the reasons why the families of James Foley, Steven Sotloff, Kayla Mueller, and Peter Kassig grew so frustrated with the government agencies charged with trying to free their loved ones. The support system is often lacking, information sharing between the FBI and the families is often spotty, and parents are left twisting in the wind wondering whether their government is actually viewing their children as a priority.

Take the words of Diane Foley, the mother of the late James Foley: "The F.B.I. didn't help us much -- let's face it. Our government was very clear that no ransom was going to be paid, or should be paid. It was horrible -- and continues to be horrible. You are between a rock and a hard place."

The whole purpose of President Barack Obama's address and executive order on hostage policy this week was designed to fix a situation that he described as "unacceptable:" namely, that whenever an American is snatched by a terrorist group thousands of miles away, the U.S. Government finds itself scrambling among several different agencies and sees anguished families wanting up-to-date information as a stressful obstacle to their efforts of acquiring a successful release.

"[I]t is true that there have been times where our government, regardless of good intentions, has let them down," the President said during his speech outlining the policy changes. "I promised them [the families] that we can do better."

Whether or not the new policy outlined by the administration mitigates the complaints from parents and siblings and enhances the inter-agency, counter-hostage effort won't be known until a U.S. citizen comes back home safe and sound. But there are several issues that have the potential to complicate the President's newfound hostage policy.

1 - I had to read the President's executive order several times to fully understand it. There are a number of new positions and committee entities established both within the FBI and the White House, and the membership of both committees includes officials from across the law enforcement, diplomatic, and intelligence communities. The Hostage Recovery Fusion Cell will be the clearinghouse for all of the information and intelligence on the locations of U.S. hostages, and this committee will be responsible "for coordinating the recovery of U.S. hostages abroad." Yet they answer to another committee called the Hostage Response Group which meets to set policy. This committee, in turn, answers to the National Security Council and the President of the United States. So, on its face, we have three entities working towards the same goal instead of a single person or group that can be held accountable if things go bad. This is Washington at its worst (i.e. the creation of multiple commissions and working groups in order to solve a problem). 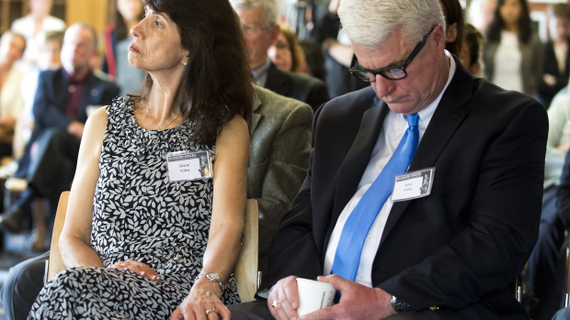 2 - The U.S. Government will stick with the current policy of refusing to pay ransom for hostages, but the Justice Department will also not prosecute families who attempt to raise money in order to get their loved ones released. So, in essence, the administration is indirectly allowing Americans to send money to terrorist organizations - even if exchanging money for a hostage is technically opposed by the U.S. Government. The Obama administration is trying to have it both ways: keeping the current opposition to ransoms intact to skirt criticism from the right, while appeasing families by allowing them to fundraise and do what they feel needs to be done to get their son, daughter, father, or mother home safely. The result, however, is the same: the possibility of hundreds of thousands of dollars making their way into the coffers of the likes of Al-Qaeda, Boko Haram, or the Islamic State.

3 - Who is held accountable if an American hostage is killed or moved to a different location? Judging by the President's executive order, no single official will be dressed down if something awful happens to a captive American. Instead, we have a committee comprised of multiple agencies directed by an FBI designee. Supposedly the FBI official will be the fall-guy, but it's not spelled out clearly in the President's directive. Rep. Duncan Hunter, the member of Congress that monitors the hostage issue most closely, would like a supervisor or coordinator to direct all aspects of the government's hostage policy. President Obama's new policy change doesn't establish that kind of top-to-bottom mechanism.

4 - Reporting requirements are absolutely vital in a large bureaucracy. A policy is only as good as its implementation, and large organizations (let alone the federal government) will only know if the hostage policy is working if the head-honco of that organization (in this case, the President of the United States) is given an objective assessment as to whether employees are carrying out the program effectively. The President's directive on hostage policy requires a report on "the implementation" of the executive order to determine whether any improvements need to be made or whether any person or agency is dragging their feet. The problem, however, is that this report is due a year after the executive order is signed. That means President Obama and the National Security Council won't receive a full briefing on the manner until roughly June 24, 2016. Why the President chose one year instead of nine months or six months is anyone's guess (it's most likely an arbitrary number), but the world is a fast-moving place that can change on a dime between now and then. Five, ten, or twenty additional Americans could theoretically be taken hostage by a terrorist group before the President even receives his first report on the brand new hostage policy. Either this one-year timeframe needs to be condensed, or the President should order his staff to fill him in with preliminary reports before that date hits the calendar.