These guests had to go.

Protected from head to toe like "someone going to the Moon," an exterminator on Sunday removed a three-foot wasps' nest from a guest room bed in Winchester, England.

"I have never ever in my 40 odd years [on the job] seen something like this before," John Birkett of Longwood Services Pest Control told The Huffington Post. 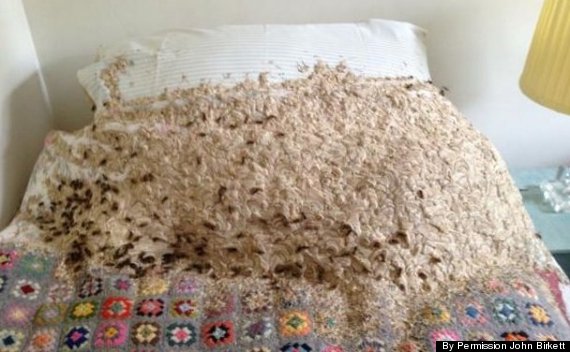 The nest, which burrowed into the mattress, housed 5,000 wasps and took three months for the insects to build, he estimated.

But it took Birkett only a few hours to destroy. He said he first sealed the windows and fumigated the worker wasps buzzing about, then injected the nest with powder in four places. After 10 minutes he returned to the room and began to break up the nest, which had a papier-mâché consistency. He then disposed of the nest in the garden.

The woman who lives in the home called Birkett after her son went to look for something in the unused spare room and found the wasps had colonized the space, most likely through an open window.

The woman "understandably" did not want to be identified, he said.

Although he had a job to do, Birkett felt "a bit sorry" that he had to destroy something the wasps had worked so hard to build. "I stood with amazement looking at it," he said. "If we could get humans to work together like this, we’d be in business."