Today is the birthday of Russian artist Wassily Kandinsky, a man whose abstract art made history in the 20th century and whose name continues to stump English speakers long after his death. The beloved painter and printmaker -- celebrated with a Google Doodle today -- would be blowing the candles out on his 148th year were he still alive today.

In honor of Vah-SEEL-ee Kahn-DIN-skee's big day, we're collecting together some of the more interesting facts from his storied life and career. From his birth in Moscow, back when the Russian Empire was still in existence, to his death in France at the age of 77, here are the 9 things you might not have know about dear Vasya. 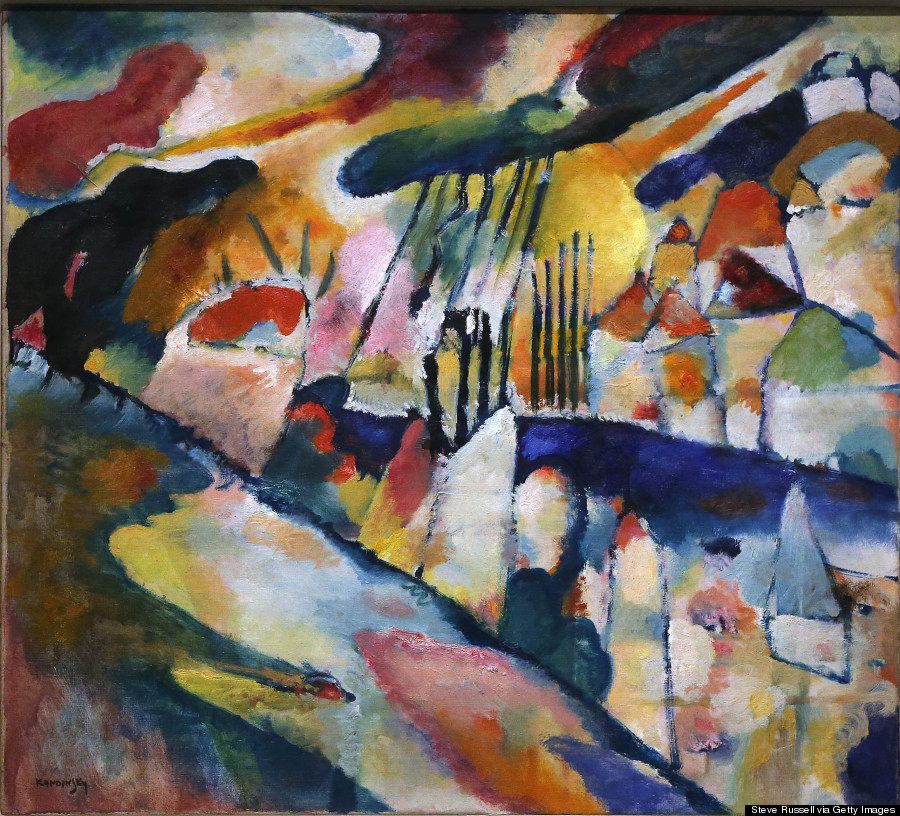 1. Kandinsky began seriously pursuing art when he was 30 years old. Which makes him somewhat of a late bloomer. In fact, he had previously been studying law and economics, but he opted to abandon the fields (and a professorship in jurisprudence at the University of Dorpat) in favor of studying painting in Germany. 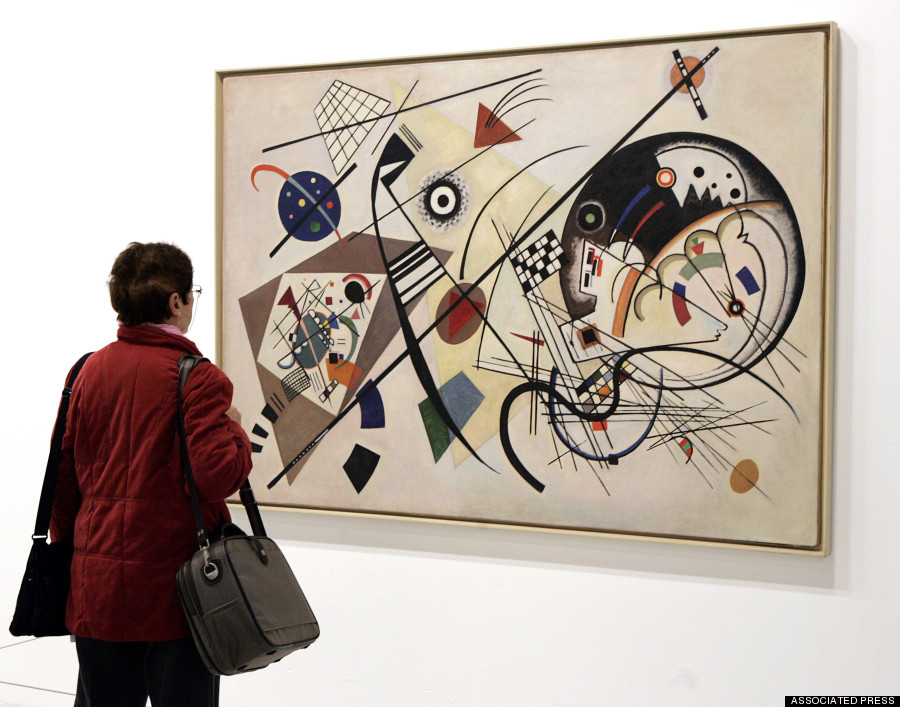 A visitor views a painting by Russian artist Kandinsky which is part of the exhibition presented at the Pompidou Center in Paris Wednesday April 8, 2009. (AP Photo/Remy de la Mauviniere)

2. He was an "average" student. Though his appearance, marked by pince-nez glasses and sharp suits, gave the impression of a formidable teacher, he was mostly an average art student. He studied for two years under Anton Ažbe, then for one year alone, before finally being accepted into the Munich Academy, showing a proclivity toward color theory. He received his diploma in his mid-thirties and enjoyed a few years of mid-level success as a professional artist thereafter. 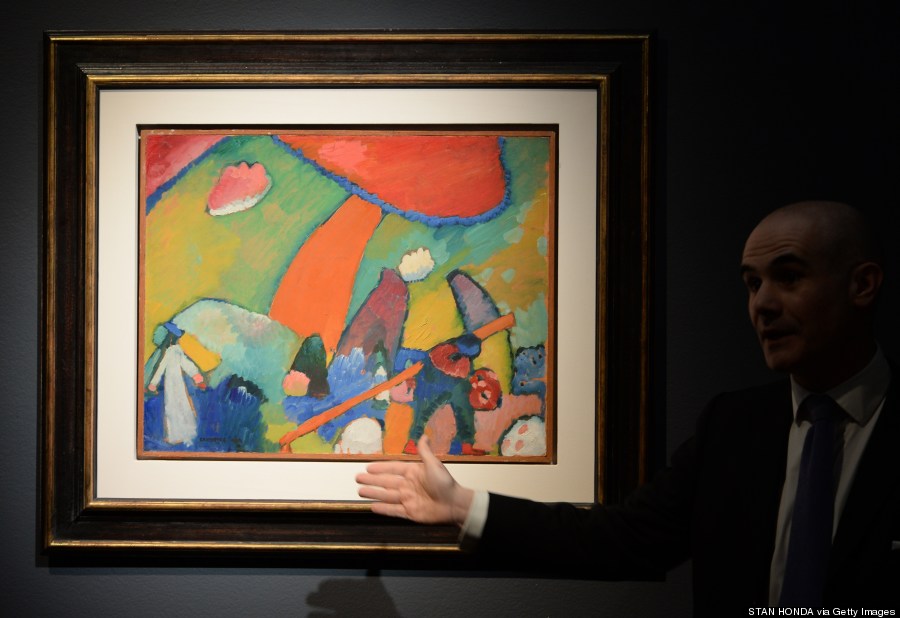 3. He believed art and music went hand in hand. This famous quote sums up his penchant to equate painting with composing music: "Color is the keyboard, the eyes are the harmonies, the soul is the piano with many strings. The artist is the hand that plays, touching one key or another, to cause vibrations in the soul." 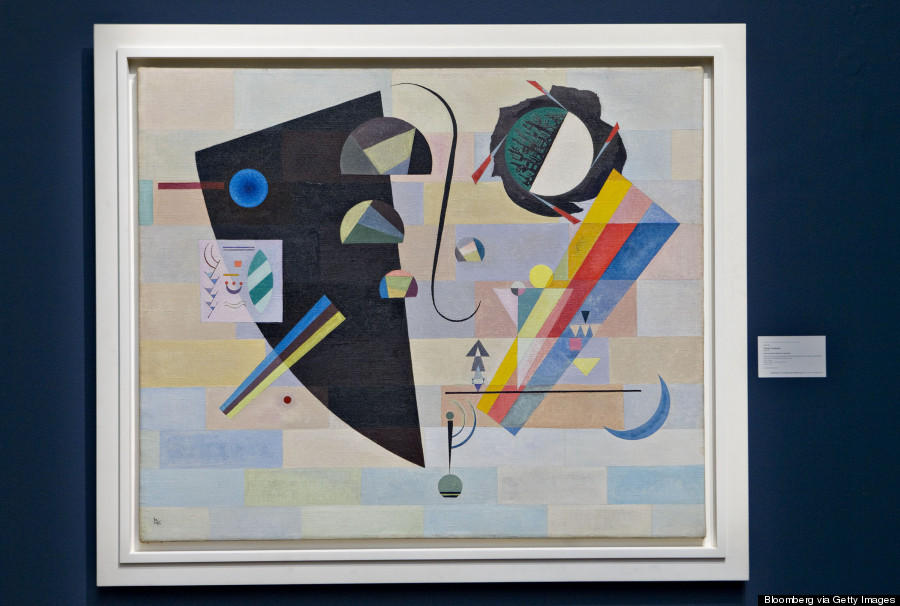 "Krass Und Mild (Dramatic and Mild)" by Wassily Kandinsky hangs during a preview of the Impressionist and Modern Art fall sales at Sotheby's in New York, U.S., on Friday, Oct. 30, 2009. (Photographer: Daniel Acker/Bloomberg)

4. He gushed over Monet's "Haystacks" just like the rest of us. Monet's lily pads and haystacks have converted more than a few admirers into artists. For Kandinsky, the sight of the Impressionist's harvest landscape was simply revelatory:

"That it was a haystack the catalogue informed me. I could not recognize it. This non-recognition was painful to me. I considered that the painter had no right to paint indistinctly. I dully felt that the object of the painting was missing. And I noticed with surprise and confusion that the picture not only gripped me, but impressed itself ineradicably on my memory. Painting took on a fairy-tale power and splendour." 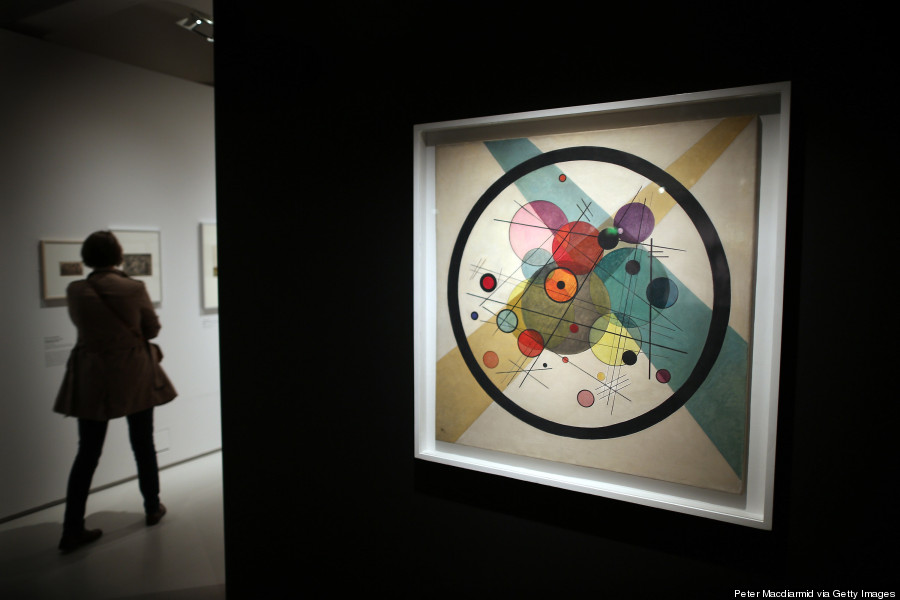 Wassily Kandinsky's 'Circles in a Circle, 1923' is displayed at the 'Bauhaus Art as Life' exhibition at The Barbican on May 2, 2012 in London, England. (Photo by Peter Macdiarmid/Getty Images)

5. He is credited with being the first artist to create a purely abstract work. It was an untitled watercolor, now in the Centre Pompidou in Paris. According to most historians, by the time he painted Composition VIII in 1923, all representational elements had been removed from his work. Francis Picabia and Piet Mondrian were exploring similar patterns in "pure abstraction" during this period as well. 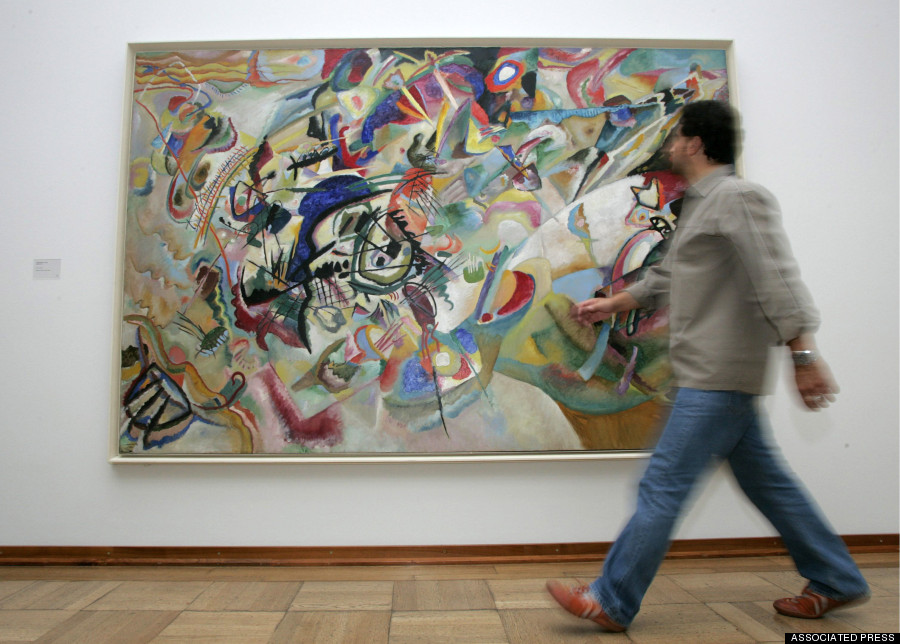 6. Kandinsky allegedly had synesthesia. Synesthesia is defined as "the production of a sense impression relating to one sense or part of the body by stimulation of another sense or part of the body." In essence, he would see colors when listening to music, which makes sense -- given he also credits Richard Wagner's “Lohengrin” as a reason for leaving law behind and chasing art. 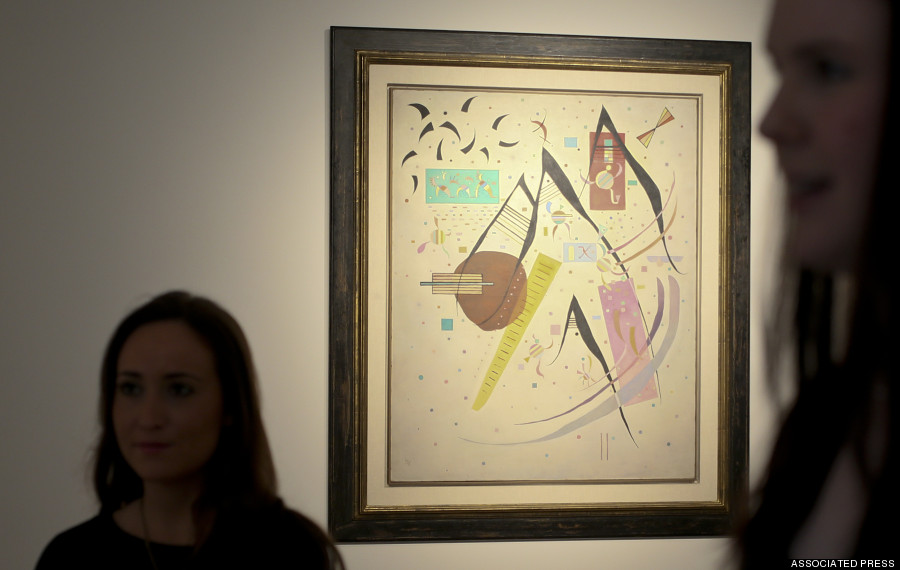 7. He didn't just love painting, he saw it as a form of worship. In Kandinsky's book Concerning the Spiritual In Art (1910), the artist declared that "colour is a power which directly influences the soul." He felt that the use of color was not merely a means of representing objects and forms, but rather a method of reaching a level of spirituality. 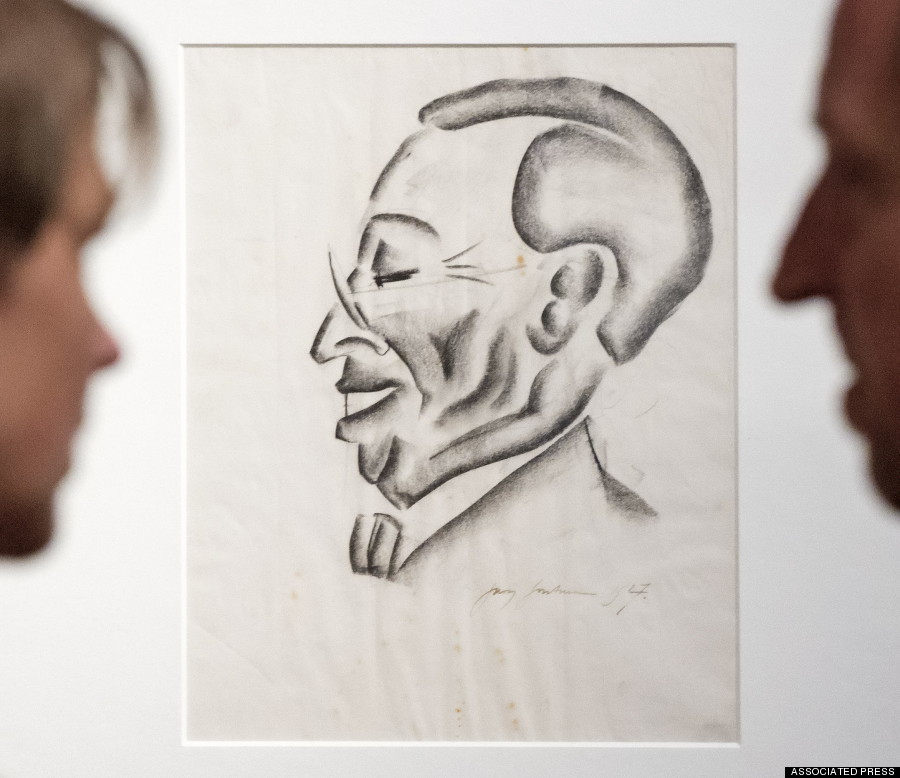 Visitors stand in front of the charcoal drawing "Kandinsky" (1927) by Georg Hartmann during a preview at the exhibition "Bauhaus." (AP Photo/Jens Meyer)

8. His art was confiscated by the Nazis before he died. While he was a Bauhaus professor, three of his first "Compositions" were seized by Nazis and put on display in the now infamous "Degenerate Art" exhibition in 1937. They were then destroyed. 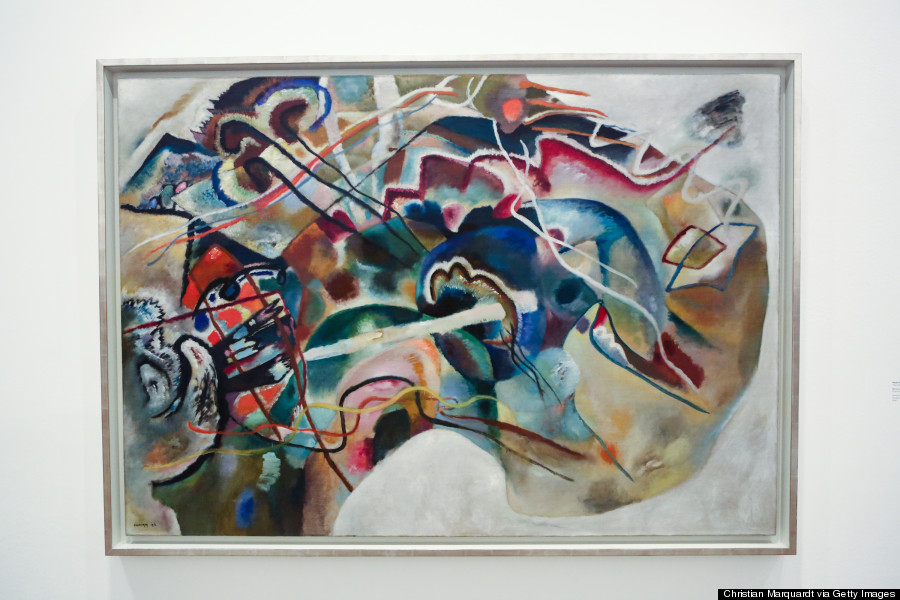 The painting "Picture with white border" of Wassily Kandinsky is displayed at the exhibition 'Visions Of Modernity' at the Deutsche Guggenheim on November 14, 2012 in Berlin, Germany. (Photo by Christian Marquardt/Getty Images)

9. His art now sells for millions and millions of dollars. His 1909 painting "Studie fur Improvisation 8" sold for $23 million at Christie's in 2012. 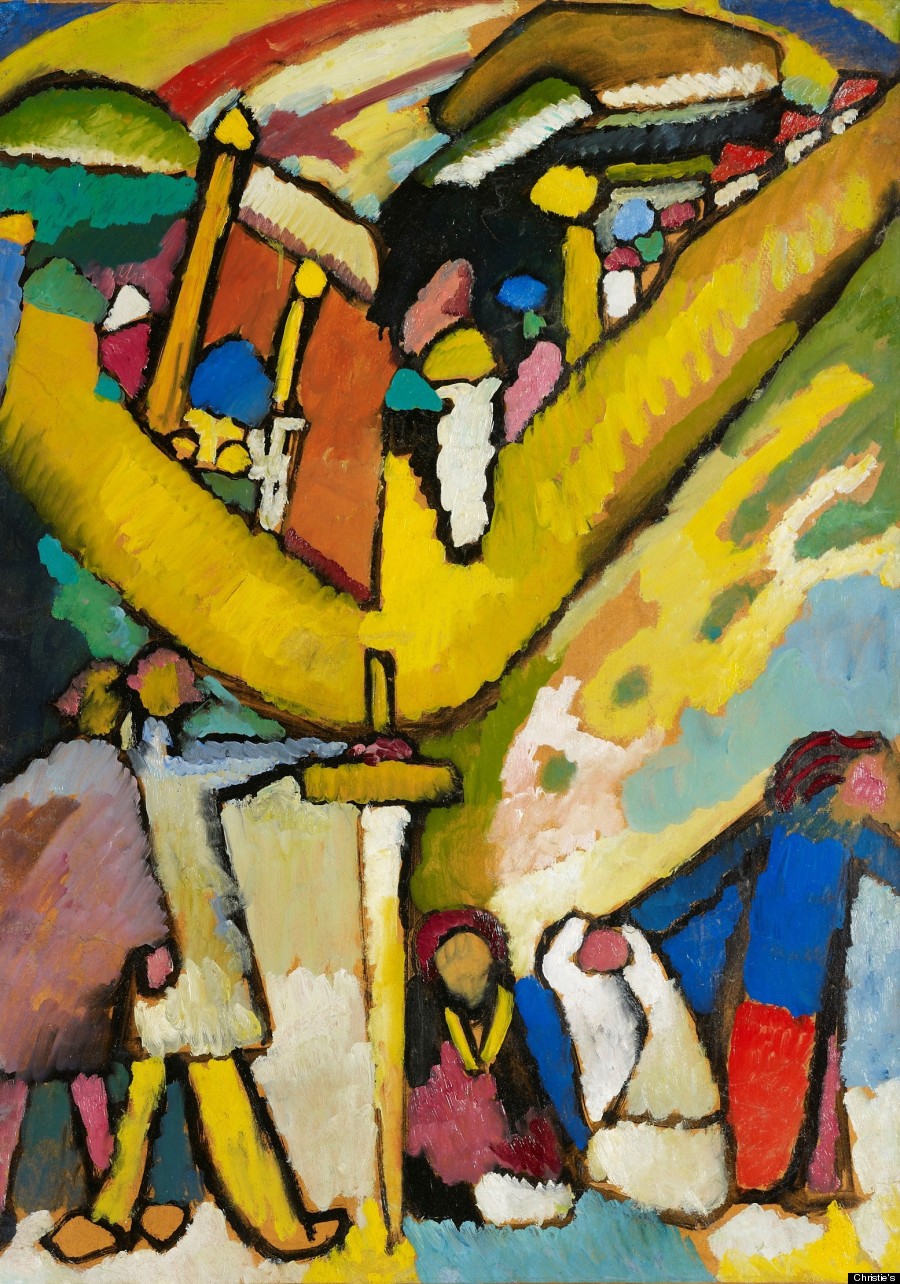