Many of California's oil industry wastewater injection wells are near recently active fault lines, posing a risk of earthquakes that could damage crucial infrastructure in the state, according to a report by three environmental groups.

The report, released on Thursday, maps the proximity of California's active wastewater disposal wells to the state's fault lines and heavily populated areas, such as Los Angeles, Kern and Ventura counties.

The three groups -- Earthworks, Clean Water Action and the Center for Biological Diversity -- said they found 54 percent of California's 1,553 active and new wastewater injection wells are within 10 miles of a recently active fault. (A recently active fault was defined as one that has caused an earthquake in the past 200 years.) The report argues that scientists have said there's a risk of earthquakes within 12.4 miles of injection wells.

A graphic from the report by the three environmental groups.

Wastewater injection wells have been linked to earthquakes in states including Ohio and Arkansas but not California.

The wells are used by energy companies to get rid of the fluids that are a byproduct of many oil and gas extraction methods, including hydraulic fracturing, or "fracking," a process in which liquids are pumped into underground rock formations to release hydrocarbons.

Waste liquids that are a byproduct of oil and gas extraction are often injected back into the ground because it is the most inexpensive way to get rid of them, says Anthony Ingraffea, a professor of engineering at Cornell who's advocated against shale gas and oil development in the past. Other options for disposing of the liquids, like using industrial treatment plants, are much more costly, explains Ingraffea, who is on the board of Earthworks, one of the organizations that published the report.

But pumping the water into underground rock formations can build up pressure, which, if exerted on a fault that is already stressed, can cause earthquakes, the report says. (In 2012, a wastewater disposal well in northeastern Ohio was permanently shut down after a series of quakes in the well's vicinity.)

But the report, which has not been peer-reviewed, should be taken with a grain of salt, some say. 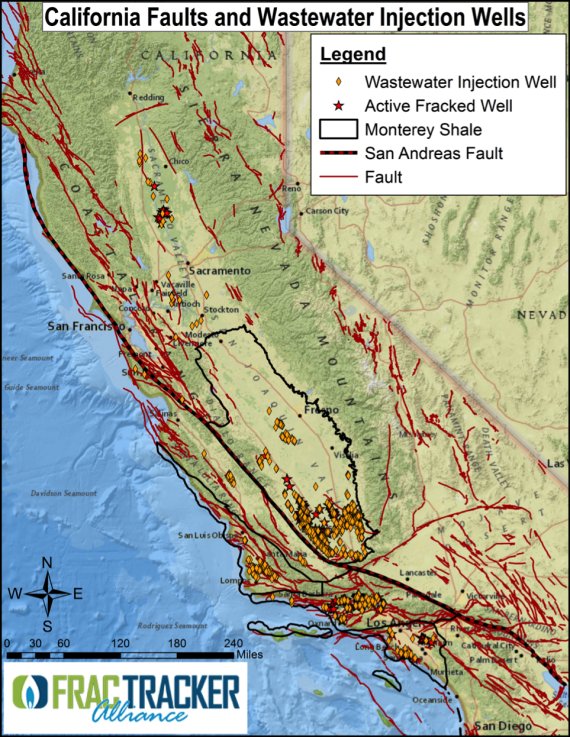 Where California's waste-water injection wells are in relation to the state's fault lines and populated areas. The report, "On Shaky Ground: Fracking, Acidizing, And Increased Earthquake Risk In California," used publicly available data from the U.S. Geological Survey, the California Geological Survey and California Division of Oil, Gas and Geothermal Resources to make the maps.

Dave Quast, the California director of Energy In Depth, a research and public outreach campaign launched in 2009 by the Independent Petroleum Association of America, said the report unfairly singles out the oil and gas industries and attempts to scare people about a nonexistent threat.

"Wastewater injection is a common way to get rid of water across all industries," Quast said. "It has nothing to do with fracking in particular... There's never been a case of earthquakes from wastewater injection in California, and there's no reason to think there ever will be."

"We reinject 3 billion barrels of produced water into the earth in California every year, and have done so for over 50 years. We've never had a problem," Zierman said, adding that the report was authored by "environmental activists who are not seismologists."

“We are reviewing the report now, but at first glance, it appears to include some assumptions and conclusions that should be given consideration in a peer review process," Jason Marshall, the chief deputy director of the California Department of Conservation, said in an email.

"On Shaky Ground: Fracking, Acidizing, and Increased Earthquake Risk In California," was published by the nonprofit groups Earthworks, the Center for Biological Diversity and Clean Water Action.