Though never exactly a yoooge attention-getter, the Best Foreign Language category in this weekend's Oscar shindig contains as often some very powerful cinema among its five nominees.

And if the runes cast before us by earlier rounds of the awards season are any guide, one film is close to being a shoo-in for the 'Best Foreign' statuette.

Son of Saul from Hungary (directed by László Nemes - or Nemes László, to use courteously the proper Hungarian ordering of names) comes lauded already as 'Best Foreign' among the Golden Globe winners, and before that was awarded the Grand Jury Prize at the Cannes Film Festival.

The film has several points of strong distinction. Perhaps the most frequently praised has been a shooting-style that is deliberately oblique. It keeps much action outside of the main character's face resolutely out of focus, relegating it to the periphery of the audience's visual attention, as it were. 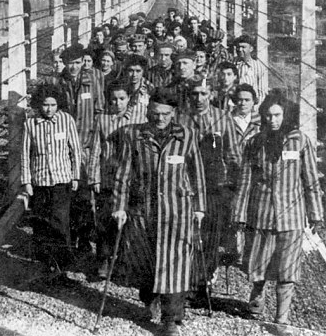 That might be just as well, since the action takes place in a Nazi extermination camp, though for me the device can sometimes appear over-stylized and too obviously intentional - breaking my favorite adage from Ovid, that the aim of "art is to conceal art" (ars est celare artem).

What is an incontestable virtue is that main character's face. It belongs in fact to the actor Géza Röhrig (or to be punctilious again, Röhrig Géza, pictured below). But to label him an actor, even though he plays the central figure, Saul, is unfair. He's better known, certainly in his native Hungary, as a poet, with eight books to his credit. He's also been the leader of a subversive punk band, during the later days of Hungarian Communism. 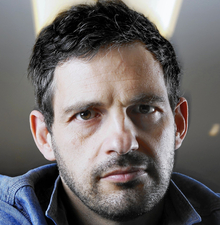 He's also, above all else, a devout Orthodox Jew - and it was in that context that I interviewed him for this week's Religion and Ethics Newsweekly on PBS television. He wasn't born Jewish, but after being orphaned as a child he was adopted by a Jewish family. His religious awakening didn't come, though, until his early adulthood, when he visited Auschwitz, ending up spending a month there in contemplation.

Or watch it via PBS:

The film - like its four rivals (from Colombia, Denmark, France and Jordan - has an assiduous promotional campaign behind it, led by the nimble firm of Sophie Gluck and Associates, who can claim something of a specialty in successful work for foreign films. They helped, for instance to pull off 'Best Foreign' Oscars for France, with Amour in 2013... for Iran -- its first-ever -- with A Separation in 2012... and for Germany with The Lives of Others back in 2007.

This year the promotion work has been as cannily managed as ever. Just four clips from the movie were made available for publicity purposes. Maybe I raised a delicate problem when I asked for more extracts than that.

I wanted to follow the film's central through-line in which Saul is obsessively desperate to get a proper ritual Jewish burial for the title's "son" of Saul (evidently not his real son)... and it was only after much consideration that its US distributors, Sony Pictures Classics, eventually gave special permission for me to include in our broadcast the necessary footage showing that.

So we get to see Saul painstakingly wash the boy's body. This has the compassionate pang of reality; no soft-focusing here.

Among Rohrig's non-playacting functions in real life is to be a shomer, someone who accompanies a body before a funeral. One of his everyday tasks, at New York's Plaza Jewish Community Chapel, has been to help ritually wash the bodies of the Upper West Side's Jewish dead.