"I discovered encaustic (the ancient Egyptian method incorporating pigment mixed with hot wax) in 1975 when I was at Parsons," David says. "I loved the immediacy of the process, the physicality, and how I was able to embed objects and create narrative in abstraction. I felt it was a perfect actualization of myself through painting."

Although gases released in the process with which David has experimented over the years have caused neuropathy in his legs, he continues to push his technique to the limits, as evidenced in his latest painting, "Cluster of Blessings." The 300-pound work includes barbed wire, foliage, and even shreds of his work clothes. To create its rough-hewn, apocalyptic layers, David took the painting to a remote field and set it on fire.

"The painting was created over a period of six years. I wanted to do something as dramatic and violent as nature itself," he says.

The title, 'Cluster of Blessings' is a Buddhist term for the Gohonzon, a mandala people chant to in order to attain enlightenment. It contains all states of life, from complete happiness to abject suffering. I am moved by that, and wanted to represent that in the painting. I felt that burning was a natural process to unify the painting's multiple layers and immense size and echo the narrative of this work. 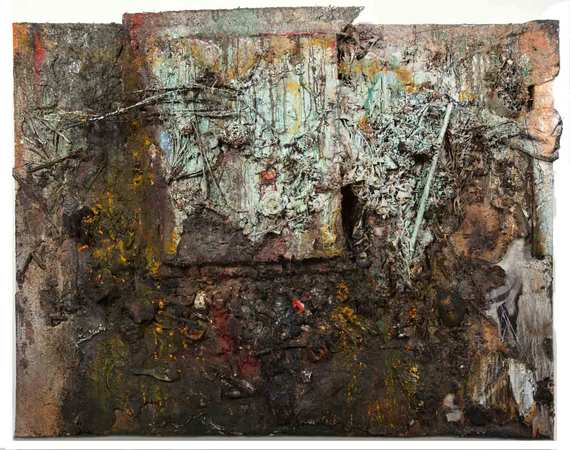 In 1983, David was the youngest recipient of a Guggenheim Fellowship. He first exhibited at New York's historic Sidney Janis Gallery in 1981 and M. Knoedler represented him for 20 years. His work is included in the permanent public collections of the Metropolitan Museum of Art, the Guggenheim Museum and the Jewish Museum in New York, among others. David currently runs Life on Mars Gallery in the Bushwick arts district of Brooklyn, New York. He also lives part-time in Atlanta, Georgia, where he teaches and mentors artists in his Fine Arts Workshop and Fine Arts Atelier.

One of the Atelier's breakout painters, Karen Schwartz, says of David: "Michael is all about having NO FEAR. Go for it! The other principles he preaches -- integrity and freedom, come from the 'no fear, kill the cat' approach to making art. Also remarkable about Michael is that he tells you to go with who you are. If you are messy and imprecise, then, go with that and don't try to control what's natural for you. 'Own it', and make it a strength of your work."