A marketing stunt for the upcoming Ubisoft game "Watch Dogs" is inadvertently allowing users to check how well they've set up their Facebook privacy settings.

The campaign called "Digital Shadow", which currently is available only in the US, requests permission to access a user's account and then pulls information to build a comprehensive dossier of the user as if he or she were an assassin's target. And we do mean comprehensive.

They know me too well. 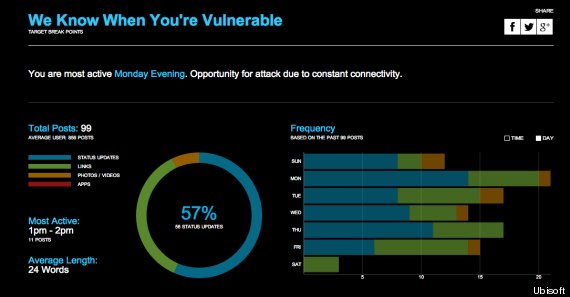 A breakdown of when I'm most active on Facebook.

Digital Shadow doesn't stop there. It breaks down when users are most active on Facebook and where in the world they're most likely to be found. It also provides a potential salary based on educational level and job title, as well as a breakdown of possible passwords that could be used to hack their accounts.

It even creates a sort of character profile based on their activity. (It labeled me as a potentially hostile enemy, and it called AdWeek writer Kristina Monllos one who possesses "a bleak outlook that could be manipulated for future gain.")

Some potential passwords generated based on my friend list and interests. (You're not even close!)

But this marketing campaign is only as effective as users' privacy settings are ineffective. I, for example, don't have many settings turned on because I prefer to monitor my profile myself. That's why my Digital Shadow profile was full of information on me, but others, like Yahoo's Rob Walker, had a more sparse profile because of stricter privacy settings.

While undoubtedly a clever marketing ploy for a game that allows you to "hack into anyone's life," the Digital Shadow tool is fascinating for anyone posting information to Facebook. And it may very well encourage users to take their online privacy settings a little more seriously.

Head over to the Digital Shadow tool to see your own horrifyingly detailed breakdown, then update your privacy settings ASAP.

This post has been modified to include that this campaign is available for those in the US only.