As we all have heard, President Obama has nominated federal appeals court judge Sonia Sotomayor for the Supreme Court. And, as expected, the right wing were ready to pounce.

One of their lines of attack, as shown by this just released ad, is that Sotomayor isn't very smart despite her extremely impressive pedigree. Take a look.

Alright, that's not a real ad, but it might as well should be. And the line of attack, which began in Jeffery Rosen's mostly anonymously sourced column, is ludicrous. 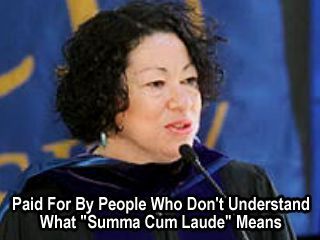