Every day for the past month in Israel-Palestine has been filled with reports of more people killed, the vast majority of them Palestinians killed by the Israeli army. As much of Israeli society -- our society -- is swept up in the fever of the most recent war on Gaza, there are those voices that refuse to accept a present or future of war, hostility, occupation and violence.

One of those voices belong to Udi Segal, a 19-year-old Israeli from Kibbutz Tuval, who was supposed to be drafted into the Israeli military on Monday, July 28th, 2014. Despite the law obligating him, like most other Jewish-Israeli teens, to join the military after graduating high school, Udi refused. He is part of the 2014 letter of conscientious objectors, which has garnered over 130 signatures and is the largest public collective declaration of refusal in Israel since 2008. One of the signatories, Uriel Ferera, is currently serving time in military prison. On Monday, Udi refused to enlist, and was sentenced to 20 days in prison, joining Ferera in a facility known as military prison #6 [-MR and YO]. Watch Udi speak about his decision here:

Udi Segal: I am going to go to jail this Monday [July 28th] because of my refusal to join the Israeli military. I am part of the letter of conscientious objectors that was sent a few months ago to the Prime Minister with around 130 signatories.

We use refusal as a tool in the struggle against the occupation.

Where did you go to school?

Udi Segal: For eight years, until eighth grade, I studied in a Jewish-Arab school in Misgav. From there, I went to public school in Misgav, at a high school that is always boasting about its students' high enlistment rates in the military, mostly into combat units. It was a sharp transition, and in my high school, my decision to refuse was not received well... There are a lot of people who stopped speaking to me after my decision.

How would you frame your refusal to Palestinians?


Udi Segal: [Arabic]: I'd want to say to them that there are people who support them, there are young men and women who oppose the occupation, and there are many Israelis who understand that the occupation does not only harm the Palestinians, but it harms Israelis also.

What is it like to refuse while there is a war going on?

I've never experienced anything close to such an extreme deprivation of freedom. 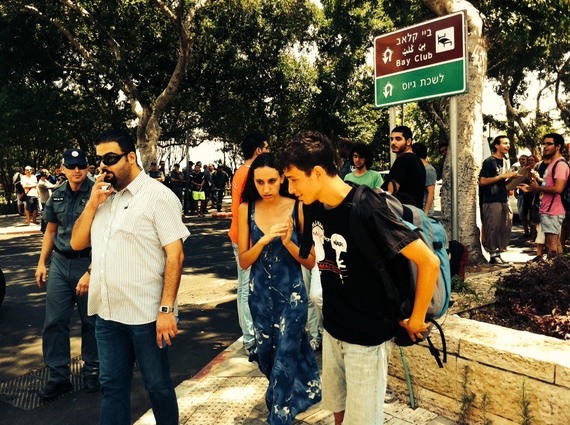 Udi Segal refused to enlist on Monday, July 28th, in Haifa, and was sentenced to 20 days in military prison, after which he will be asked to enlist again, and so on, and so on.

Yuval Orr is a American-Israeli filmmaker and activist whose first short film "Hebron is Beautiful" explores the banal absurdity of the Israeli occupation of Hebron through the eyes of a Palestinian teenager. Moriel Rothman-Zecher is an American-Israeli writer, activist and refusenik. He blogs independently at The Leftern Wall. They are both members of the All That's Left Anti-Occupation Collective.