The Mayans may have only had it half right in their prediction of the end of the world, which means you've made it to see yet another New Year's Eve. You could brave the masses, shivering beneath a big glittering ball or, worse, watch it on TV. Or you could take cues from across the African diaspora and let your New Year’s Eve mean something this year.

“Watch Nights are a tradition of prayer and coming together in black churches," said Dr. Kaye Wise Whitehead, an African American studies scholar at Loyola University in Maryland, referencing the 150-year-old new year's eve tradition immediately preceding African-American slaves being set free. "Since [1863], it’s become a way to pay homage to black people all over the country who were waiting for freedom to arrive.”

January 1 was once marked as a day of mournfulness, a day when slaves were put on the auction block, causing countless families to be torn apart. But the day took on an almost sacred significance on December 31, 1862, the eve of the Emancipation Proclamation’s enactment, the document by which slaves were legally set free, marking a new era of year-end praying and giving thanks.

“It’s also become a time to look at issues in the black community," Whitehead adds. "For example, before Obama was inaugurated, we prayed for his safety during Watch Night."

Throughout the African diaspora, ringing in the new year involves remembering our ancestors. In the Bahamas, a Carnival-like parade called Junkanoo takes place. The celebration, featuring a procession of live bands and colorful costumes, has its roots in West African festivities and is said to have begun several hundred years ago when slaves on the island were given time off for Christmas. In Haiti, people eat Soup Joumou, a pumpkin soup once forbidden to slaves, in honor of their independence, won in 1804.

In America, we feast on the foods of our forebears: “Black-eyed peas represent coin money and collards symbolize the greenbacks we hope the next year will bring us,” said Dr. Joanne Braxton, founder of the Middle Passage Project at the College of William and Mary, which studies the transatlantic slave trade and its effects on African Americans. “We learn these things not from books, but from our mothers’ knees. It’s a way of keeping in touch with those who have gone before us.”

Here's a look at how other new year traditions have evolved over the years and across the African diaspora. 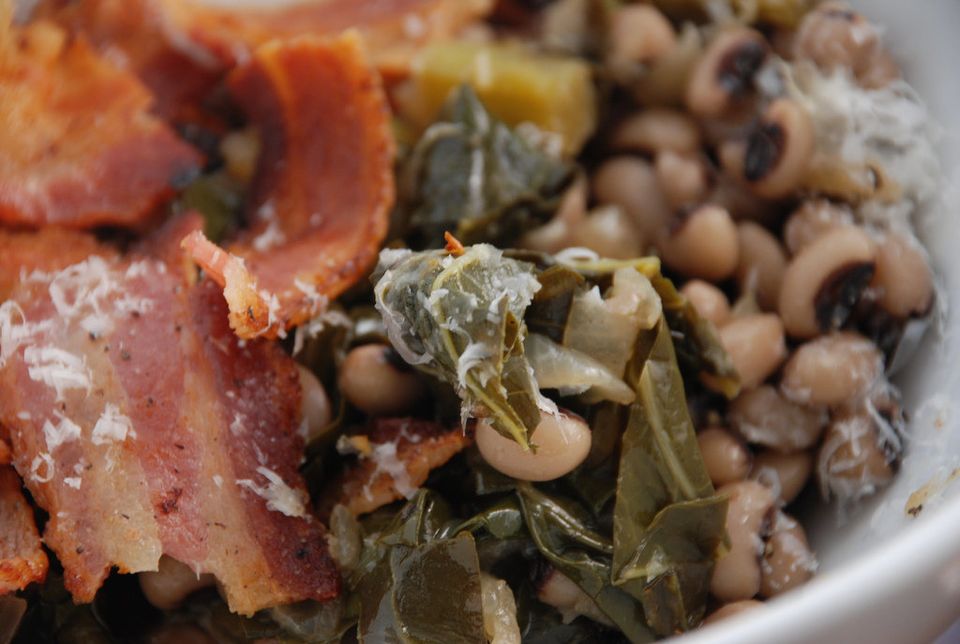 1 / 8
Hoppin’ John; Anywhere, USA
<a href="https://www.huffpost.com/entry/black-eyed-peas-recipes-start-new-year_n_1168391#s572265&title=BlackEyed_Pea_Rice">Black-eyed peas</a> are traditional on New Year’s Eve. They represent coins and the wealth we wish upon each other in the new year. Hoppin’ John is made with peas, rice and ham hock.