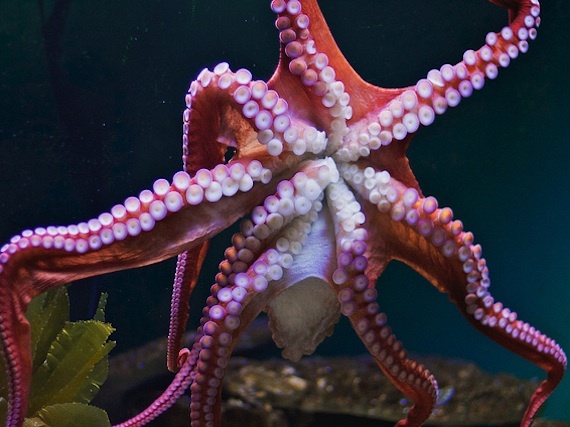 On February 14, Hazel and Franklin will meet for a blind date. There is a good chance things will get heavy; it will likely be the first -- and possibly the last -- chance either has for sex in their adult lives. There is also a small chance Franklin will get eaten.

A team of scientists is bringing Hazel and Franklin, two lonely adult octopuses, together for a brief tryst this Valentine's Day. And, yes, you can watch.

These three-year-old, 40-plus-pound giant Pacific octopuses (Enteroctopus dofleini) will be introduced during the Seattle Aquarium's annual "Octopus Blind Date." The large and powerful cephalopods, which can be cannibalistic, are usually housed separately. But on Saturday, the barrier between their watery enclosures will come down, and the two will be able to meet, sucker to sucker. Their public poikilothermic rendezvous is a hot ticket at the aquarium's Octopus Week -- and is also streamed online via webcam (starting at 3 p.m. EST, noon PST) for curious viewers across the globe.

In the wild these intelligent and sneaky animals usually pair off only once in their short, three to five years of life. And that is if they can find a mate in the vast ocean.

But these lucky two octopuses have a unique chance to get lucky this weekend. As you might imagine, however, the business of octopus sex -- with 16 arms, thousands of suckers, no bones and a penchant for cannibalism -- can be a bit tricky. And unlike many other cannibalistic animals, the octopus requires internal fertilization. To make things even more challenging, the male lacks a penis. So how does he get the job done? With one of his arms -- a specialized limb that is equipped to penetrate the female's body through her funnel and then deliver sperm packets. After mating, the female will store the sperm until she is ready to lay eggs -- which can be up to several months later.

But will the octopuses get cold, er, arms, with all those prying human eyes on the other side of the glass? The live -- and online -- audience hasn't seemed to kill the mood for previous pairs. Last year Ace and YoYo -- each weighing in at about 40 to 50 pounds -- sealed the deal in full public view. In 2013 the female Squirt made the first moves on male Rain before the two successfully mated. And 2012's pair, a large female named Mayhem and a small male named Rocky, consummated their fleeting relationship while Barry White played in the background.

After their brief time together, Hazel and Franklin will be released by divers into nearby Puget Sound (Hazel on February 15 and Franklin on February 22 -- also live-streamed online, at 3 p.m. EST and noon PST). There they will be able to live out the rest of their lives in the wild -- and perhaps contribute their Valentine's Day baby giant octopuses to the sound.

Read more about the world of the octopus in Octopus! The Most Mysterious Creature in the Sea, now also available in paperback.